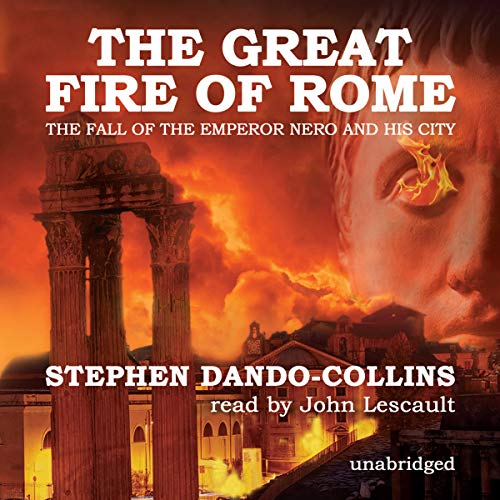 In A.D. 64, on the night of July 19, a fire began beneath the stands of Rome’s great stadium, the Circus Maximus. The fire would spread over the coming days to engulf much of the city of Rome. From this calamity, one of the ancient world’s most devastating events, legends grew: that Nero had been responsible for the fire, and fiddled while Rome burned, and that Nero blamed the Christians of Rome, burning them alive in punishment, making them the first recorded martyrs to the Christian faith at Rome.

The Great Fire of Rome opens at the beginning of A.D. 64 and follows the events in Rome and nearby as they unfold in the seven months leading up to the great fire. As the year progresses we learn that the infamous young emperor Nero, who was 26 at the time of the fire, is celebrating a decade in power. Yet the palace is far from complacent, and the streets of Rome are simmering with talk of revolt.

Dando-Collins introduces the fascinating cavalcade of historical characters who were in Rome during the first seven months of A.D. 64 and played a part in the great drama. Using ancient sources, as well as modern archaeology, Dando-Collins describes the fire itself, and its aftermath, as Nero personally directed relief efforts and reconstruction.

The Great Fire of Rome is an unforgettable human drama which brings ancient Rome and the momentous events of A.D. 64 to scorching life.

I am fascinated by Ancient Rome and so, I did find much of the information in this book interesting. However, there are definitely much better books out there on the subject and when it comes to Ancient times, you're dealing with a lot of names and places you are not too familiar with and thus, these books work better with actual pictures so that the reader or listener could get some kind of a visual of what and who is being discussed. Otherwise, be prepared to listen again so that you have a better chance of remembering much of this. With that said, the narrator does a good job and the ending is especially great. I would recommend this title to anyone who enjoys history and Ancient Roman Times as I do.

Where does The Great Fire of Rome rank among all the audiobooks you’ve listened to so far?

I have listened to hundreds of audiobooks, many of them excellent, so it is pointless to try to rank this. However, I can say that it definitely belongs to the top half or third, among those I would not want to miss.

I did not like the pace (slow), and because the pronunciation of consonants is not always clear (especially in names), I could not speed it up too much (certain narrators who sound unbearable at reading speed are find when you speed up; some are clearly understandable at 3x and that is a considerable advantage).

Certain negative comments led me to expect less. I am delighted to say that I think most of the objections they express are either invalid or of little weight.

Many who disliked the book seem to be swayed mainly by their indignation at the author's revising the widespread idea that Nero made Christians the scapegoat for the fire: but there is no near-comtemporary Christian writing that mentions this, and our only source is Tacitus, which comes to us in a medieval copy that is in parts unreliable as copyists sometimes made their own additions and revisions (a Wikipedia article says that most authorities consider the passage authentic, but I find the brilliant historian Richard Carrier quite convincing in impugning its authenticity). In 64 A.D., Christians constituted an insignificant fringe sect among the many that flourished and hardly an adequate scapegoat (in the following century the situation would be different). The cult of Isis that Dando-Collins puts in place of Christians seems a far more likely target; not only was it more important by a huge margin, but Nero had himself been a disillusioned initiate.

What the book brings out was the great significance the fire had in the turn Nero took from being a largely good emperor to a monstrous one. The fire played a considerable part in creating an atmosphere of discontent and paranoia that gave the Piso conspiracy momentum and support the following year. Discovering how many supported it apparently led to Nero's increasing paranoia and appalling behavior.

The author presents a coherent and satisfying account that illuminates Nero's transformation and what happened in the earlier and later parts of his reign. Objections that much of the book is not "about" the fire are unjustified: the point is not merely to describe the fire itself but to elucidate its consequences and historical significance. Given the dearth of primary material, writing about ancient history is necessarily an attempt to weigh and make sense of what little we have. Dando-Collins may not be right on all counts, but I find him persuasive and stimulating, and his nuanced portrait of Nero seems more true than the cardboard monster associated with the name (though as in his book on Germanicus he goes a little overboard in his concluding speculations, but these few phrases I can easily overlook). I for one am grateful for a book that I found hard to put down and memorable in the insights it provides.

Sign of a good book: You glance and the counter and are disappointed that only 30 minutes remain. So much of what we know about Roman emperors comes to us from writers who wrote with little regard for historical accuracy and with overwhelmingly political agendas. But Dando-Collins proves delightfully adept at giving honest examinations of ancient sources and piecing together some very plausible theories. The result is a meaty re-examination of the adult life of Nero, complete with some fun "what if" conjecture that intellectuals and casual fans of classical history will enjoy. Disclaimer: The previous review is quite misleading. Dando-Collins never makes the claim that Christians were not persecuted in Rome. Far from it. He does question the validity of later writers' claims that they were widely persecuted under Nero. But that's Dando-Collins' gift: separating concrete facts from supposition, popular tradition, and obvious fallacies. Well done.

Not a long book, and not a boring morass of dates and Latin names that all sound the same (like many popular books on classical history). It's an entertaining narrative that stays focused on a short period of time - Nero's reign and the events of that time. A very nice piece of the "puzzle" for people like me who are acquiring a detailed conceptualization of ancient Rome. It's concise, well-written, and entertaining.

This is a strangely-organized book. It starts out as a detailed history of the titular fire, but that has burned its way through the book by the halfway point. The second half of the book is a straight-forward biography of Nero's life from the fire onward, with some flashbacks to his earlier days. It's a little plodding in the second half, and you'll learn a lot of details about how various Roman nobles killed themselves. A lot.

The narrator is clear and easy to follow, but rather stilted and very dry. Not particularly engaging at all.

The author makes some interesting deviations from the conventional wisdom on Nero's killing of Christians. I can't judge whether or not he's likely to be right, but he weirdly places the argument for his changes in the introduction and then in the main narrative presets his version as pure fact, without reference to any debate amongst historians. I found that off-putting.

my baloney has a first name...

Awful. His complete ad-hoc fantasies over the followers of Isis in his odd zeal to prove that Christians were not persecuted in Rome are so vapid that I feel stupider after just reading it.

This book is nothing less than historical fraud by Dando-Collins. He really indicated how puny is research truly is and how much is made up. He claims Tacitus as his source, but this is doubtful. He apparently only used translations and you ALWAYS NEED TO READ THE ORIGINAL source in the ORIGINAL LANGUAGE. This failure alone condems this book to the garbage heap. I do not accept his reinterpreation of Tacitus' text in which he substitute Priests of Isis for Christians -- no historical basis other than Dando-Collins imagination for this act.

Also he is a great apologist for Nero. He tried to make out Nero as a tragic figure worth of our pity and regard. He obviously is not familar or chooses to ignore the monstrosities of Nero's reign. The facts are that Nero was quite insane and Dando Collins does not give enought credence to this well-known fact.

He does,however, give a good account of how the fire started and spread. All the rest of the book is BILGE. It is simply not worth purchasing.

What is odd is that Dando-Collins, despite his totaly disregard for correct terminology, does quite a good job on his history of the various Legions and in his source book on the Legions. He spoils all this by refusing to use the Latin Terminology but garbling up into what he considers their english Equivalent which really does not adequately describe the various officer and NCO levels and thus makes the subject quite confusing.