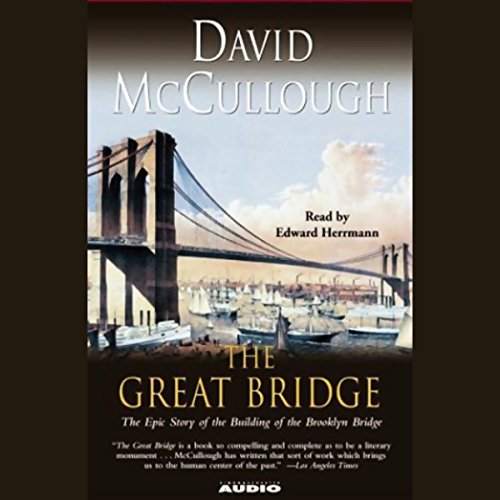 First published in 1972, The Great Bridge is the classic account of one of the greatest engineering feats of all time: the building of the Brooklyn Bridge.

This monumental audiobook, which presents extended unabridged passages from the book, brings back a heroic vision of the America we once had. It is the enthralling story of one of the greatest events during the Age of Optimism, a period when Americans were convinced that all great things were possible.

In the years around 1870, the concept of building a great bridge to span the East River between the cities of Manhattan and Brooklyn required a vision and determination comparable to that which went into the building of the pyramids. Throughout the fourteen years of the bridge's construction, the odds against its successful completion seemed staggering. Bodies were crushed and broken, lives were lost, political empires fell, and surges of public emotion constantly threatened the project. But this is not merely the saga of an engineering miracle: it is a sweeping narrative of the heroes and rascals who had a hand in either constructing or obstructing this great enterprise.

"The Great Bridge is a book so compelling and complete as to be a literary monument....McCullough has written that sort of work which brings us to the human center of the past." (Los Angeles Times)

I love David McCulluogh, and this book should be a real treat, but it's marred by a hack job of an abridging. The great Edward Herman narrates much of the book, but when it comes time to condense content, a completely different narrator, of a different sex suddenly appears! It's extremely jarring. What's worse, is the knowledge that somewhere, a version read completely by Edward Herman exists, and Audible doesn't see fit to offer it. I would gladly listen to that version, but I don't even have that option. Get with it Audible!

Not as Good as it could be

The abridged version isn't worth it. Very disappointing and obviously 'chunked out'. Not typical of a David McCullough work.

DONT YOU DARE MISS THIS ONE!

Lordy! What a story! Ive listened to this at least three times and after more than 800 audible books this still holds its place in the top 10. An exceptional true story with amazing characters.
The one troubling thing is that I was SURE I read the unabridged version of this, and after looking at my other Mccullough titles I found this same troubling scenario... abridged in my library when I was sure I had the unabridged version. John adams was the first case of this I found. I would be interested if anyone else has noticed this very worrisome condition.

I would read and/or listen to anything David McCullough wrote - and I have. Edward Herrmann
is one of the best narrators.
Why did Audible do such a poor job of abridging this fine work? It goes along for a while and then
is chopped up and reworded and has a change of narrator.
I'll just go back to reading the "Real" book. The Audible edition is very disappointing.

Irony of ironies that you abridged the greatest book about the greatest bridge. Shortening a McCullough book is like rolling the credits on a classic movie when it's only halfway done.

Hey Simon & Shuster...STOP ABRIDGING McCULLOUGH! He's one of the greatest historians of our era and you're chopping up his books. I can understand that you'd make an abridged version IF there's already an unabridged version. But the way I see it...you've already got one of the best narrators sitting there in front of a microphone. He's got the whole book and he's already reading it and so he's already deep into the spirit of the book. READ THE WHOLE BOOK!

To give credit where it's due, you did release an unabridged version of Mornings on Horseback recently and that's much appreciated. What a priceless work of non-fiction it is. Having said that, get with the program. I'm not the first and I won't be the last to say all this. McCullough, Herrmann and Runger make any topic interesting.

Regarding this version of The Great Bridge, it's nonetheless an excellent audiobook. It's a great story with great characters. Herrmann's narration is excellent as always. The female narrator breaks the fluidity of the storytelling and only reminds me that I'm not hearing the full story. However, what this version contains is a pleasure to learn. The Roeblings stopped at nothing, overcoming any and all obstacles to build this bridge. What's more fascinating than the steady progress of a man operating under intense pressure and setbacks. Great book...I recommend it.

Wait for the unabridged version. Lot's of info about persons such as the designer's son's wife's brother (really) but very little mention of the actual building of the bridge.

A good author can make the most boring story exciting. McCullough is a great author and the actual story of the bridge is not very interesting. That said, this is an interesting read because McCullough can fit the story into the times and into the people who built the bridge. The only reason I did not give this a 5 rating is because the book fails to explain the interesting technical details of bridge building. For example, in House, when the author talks about nails, he does a interesting technical history of nails, but here, when McCullough talks about wire, there is NO historical perspective, nor is there any about the engineering that goes into the bridge. Remember, this was at a time there was no computers or other mechanical aids to make bridges. That aside, the book is worth the read

Nothing mundane about history

This story has it all: a fascinating cast of characters, a heroic challenge, tragedy, triumph, love, greed, humanity, and a fascinating look into a formative time of American history. I loved this book. Were I to have one small criticism, it's that I thought there could have been more detail on the actual engineering. This is not to say there isn't quite a deal of that, but I am always fascinated by the details of how people do amazing things. Having said that, there is nothing that I would not recommend of this book.

Enjoyed the book, but would've preferred more about the building of the bridge and less about the principals involved.

well worth a listen

If you could sum up The Great Bridge in three words, what would they be?

What other book might you compare The Great Bridge to and why?

The canal builders by Julie Greene, as this too is an engineering triumph, but we found the Great Bridge more compelling

Which character – as performed by Edward Herrmann – was your favorite?

Its a wonder that this structure was built. It is a tribute to the workforce and a downer for the political aspects, which was not a surprise.