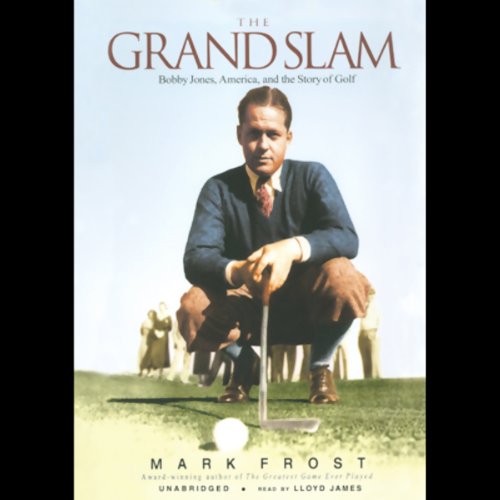 In the wake of the stock-market crash and the dawn of the Great Depression, a ray of light emerged from the world of sports. In the summer of 1930, Bobby Jones, a 28-year-old amateur golfer, mounted a campaign against the record books. In four months, this natural, self-taught player conquered the British Amateur Championship, the British Open, the United States Open, and finally the United States Amateur Championship, an achievement so extraordinary that writers dubbed it the Grand Slam. No one has ever repeated it.

Yet, soon after the Grand Slam, Jones made the shocking announcement that he was retiring from the game. His abrupt disappearance from the public eye helped create the mythological image of this hero from the Golden Age of sports that endures to this day. Mark Frost uses a wealth of original research to provide an unprecedented intimate portrait of golf great Bobby Jones.

"A swift, surefooted account of Jones's remarkable life and career." (Publishers Weekly)
"Frost does a fine job of recounting the tenor of the times....Highly recommended for all sports collections." (Library Journal)

For anyone who loves what golf IS, not just playing, this is a book unlike any other. Bobby Jones, through the somewhat sentimental eye of Mark Frost, is the kind of man you wish you knew; flawed in many ways, just like you, but greater in most ways than you'll ever be. Many biographies tell you a narrow story about the subject with only enough information about the person's surroundings to give context. Frost tells the story of America in the early 20th century and then places Bobby and his fellow golfers in the middle of that history. This is a long listen, but worth every minute. Grover Gardner does his usual outstanding job as reader and it never approaches boring. Great in every way.

I should think there is one prerequisite for enjoying this audiobook, which is that you probably have to like golf. It contains a lot of detailed descriptions of golf rounds, which to me constituted riveting drama, but these wouldn't entertain a golf-hater.

As long as you do like golf, and especially if you like the history of golf, then you will like this audiobook. It’s a brilliant piece of storytelling about the life of the phenomenally talented Robert Tyre Jones, better known as Bobby Jones, who was certainly the best golfer of his era and may have been the best golfer of all time (it’s notoriously hard to compare the leading sportspeople from different eras). This story is so well told, and the backdrop of early 20th century life is so well painted, and the tale is so expertly narrated, that you’ll feel yourself transported back to a time when people travelled by steam train and ocean liner, when radio was just starting out, and sports reporters sat atop clubhouses with typewriters, clacking away frantically in the rush to meet their papers’ deadlines.

As for golf, it was a time when professional golfers were considered lowly tradesmen who were barred entry to the club house, whilst amateur golfers were gentlemen who wouldn’t stoop so low as to earn money from playing the sport.

The rules were different back then: You weren’t allowed to clean mud off your ball on the green, so you had to go ahead and putt even if a great clod of earth virtually guaranteed a miss. If an opponent’s ball lay between your ball and the hole on the green, you were ‘stymied’, and had to chip it over the top of their ball rather than ask them to move it as you would today.

The clubs were vastly cruder and inferior to today’s hi-tech intercontinental ballistic weapons, and the balls were just compressed rubber, and yet Jones hit his shots a prodigious distance with great accuracy, despite being an amateur with a busy law career who would play only a few rounds between tournaments.

Jones was a somewhat enigmatic man; a perfect sporting gentleman who called a penalty on himself when he saw his ball move slightly at address (which no one else could possibly have seen), and yet he was prone to outbursts of rage and club-flinging in his earlier years. Aside from these outbursts, he was a fairly private and undemonstrative person, and the book doesn’t really depend on the need to be fascinated by Jones’ character to make it interesting listening. It’s more about his deeds, the characters of his friends and opponents (such as the charismatic Walter Hagen), and the extraordinary events of his life and times which make it such a great listen.

This book is the story of his life up to the year when he completed the still unsurpassed feat of winning all four majors in a single season. It’s a great listen and I wholeheartedly recommend it. If you like golf.

Excellent book about Bobby Jones and the history of golf in the USA -- intertwined with the political and cultural events of the times. The reader, Grover Gardner, is one of Audible's best. He brings the story alive.

Essential for the sports fan

"The Grand Slam" is more than a story about golf's most enduring record. It is a story of the Roaring 20s and the establishment of sports as an important part of American life. It is the story of athletes becoming heroes and of one the greatest sportsman of all time, Bobby Jones. The wealth of detail is intimidating but the story is compelling and essential for any sports fan.

A great lesson in history

This is not just a story about golf, but a lesson in history. Mark Frost does a wonderful job telling the story of Bobby Jones and putting some great stories about history in the middle of it. You will learn a lot with this Audiobook. Grover Gardner does a wonderful job again.

A must for the golf and US history fan

If you could sum up The Grand Slam in three words, what would they be?

Truly an insightful and full look at the development of Bobby Jones, US history of the time as well as golf in America as a major sport. Captivating all the way throughout, this is a must if you are a golf fan. In addition, you can't help but walk away from the book with a greater appreciation for the game, Bobby Jones as not only a tremendous golfer but man as well. Cannot do anything but recommend this book.

Where does The Grand Slam rank among all the audiobooks you’ve listened to so far?

This is one of my favorites. I am an avid golf enthusiast and loved learning more about one of the greats. It is well written and read, and kept me glued to listening.

He was terrific and was the perfect reader for this book.

Yes, if I had the time too.

Story telling at its best

Yes, it is a book that not only provides heartful insight into the most difficult game in the world but also the best player to date to have played it

What other book might you compare The Grand Slam to and why?

What does Grover Gardner bring to the story that you wouldn’t experience if you just read the book?

How I played the game

I'm a golf nut. So to say this is my favorite golf audio is saying a lot. I love the history of golf, the details from a time gone by and I enjoy hearing about Jones. Jones was more dominant in his era than Tiger was in his prime. On top of that Jones was a legendary golfer in his spare time. He was a lawyer by trade. It's an amazing story that is well told.

Storytelling at its Finest

A book that will entertain not only those who are fans of the great game of golf but of American history in the early 20th century.

To say this book is a fabulous read and while rated it 5 stars across the board, it still does not seem to give it due credit. I truly felt as if I were taken back in time and was drawn into story that chronicled the amazing life of Bobby Jones and the early history of golf in America.

Truly an amazing read and Grover Gardner does an phenomenal job as always in bringing the story to life. You will not be disappointed.