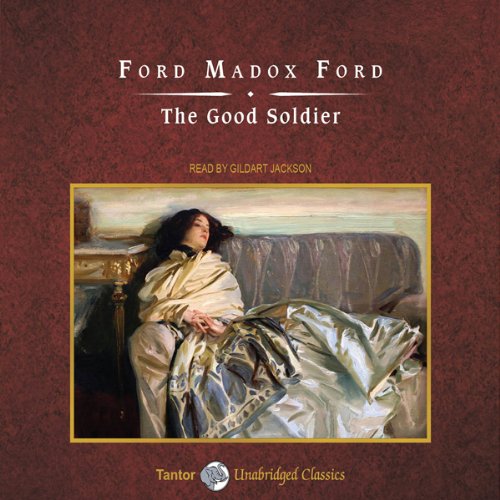 Handsome, wealthy, and a veteran of service in India, Captain Edward Ashburnham appears to be the ideal "good soldier" and the embodiment of English upper-class virtues. But for his creator, Ford Madox Ford, he also represents the corruption at society's core. Beneath Ashburnham's charming, polished exterior lurks a soul well-versed in the arts of deception, hypocrisy, and betrayal. Throughout the nine years of his friendship with an equally privileged American, John Dowell, Ashburnham has been having an affair with Dowell's wife, Florence. Unlike Dowell, Ashburnham's own wife, Leonora, is well aware of it.

When The Good Soldier was first published in 1915, its pitiless portrait of an amoral society dedicated to its own pleasure and convinced of its own superiority outraged many readers. Stylistically daring, The Good Soldier is narrated, unreliably, by Dowell, through whom Ford provides a level of bitter irony. Dowell's disjointed, stumbling storytelling not only subverts linear temporality to satisfying effect, it also reflects his struggle to accept a world without honor, order, or permanence. Called the best French novel in the English language, The Good Soldier is both tragic and darkly comic, and it established Ford as an important contributor to the development of literary modernism.

THE GOOD SOLDIER: A TALE OF PASSION famously begins with the line, "This is the saddest story I have ever heard." The character who tells us this is John Dowell, who recounts the interrelationships of himself, his wife Florence, and their friends "the good solider" Captain Edward Ashburnham and his wife Leonora.

Each of these characters is deeply flawed. John cannot see what is right in front of him. Florence is manipulative and dishonest. Edward is an in-love-with-love philanderer. Leonora is desperate to exert control over her husband. Additional characters are swept into the wake of their disastrous interactions.

While it may not be the saddest story ever, sad it certainly is, a high drama in which deception, misunderstanding, suffering, and acts of desperation abound. The narrative structure is based on non-chronological flashbacks, which can seem disorienting at times, reflecting the sense of dissolution and collapse felt by the storyteller as he attempts to make sense of overwhelming experiences.

The novel is set just before World War I, and was published in 1915, so it should be of particular interest to those like myself who are obsessed with that time period. If this is your first Ford Madox Ford book, I'd recommend you go on to read PARADE'S END as well.

Gildart Jackson's narration is excellent. His voice is well-suited to the style and character of the writing. I'd not listened to him before but now I'd very much like to hear him read another book!

What did you love best about The Good Soldier?

I tried to read this book a few years ago and stopped halfway through. This Audible version was just the right vehicle to help me realize why this book and its author have such an enduring reputation. Phenomenal and unusual story; cannot imagine a better narrator for this particular version; he comes across as not exactly American & not exactly English, sort of a strange mixture, which is part of the point of the story.
A winning combination of reader and book. Highest recommendation!

Well executed narration... but why a British one

The story is fascinating, if a bit repetitive.

The narrator was good but... for a book that repeatedly talks about Americans vs. Brits and where the narrator in the book is American, why did they pick a British voice?

One of the Best

Painful and without redemption, yet infused with sweetness and mercy and entirely and honestly human. Flawed and cruel characters held down fiercely by a rigid and stultifying society

The novel uses many interesting devices to the story. A great of time shifts and slow winding of facts through interior discussions and conversations. Some of the actions, that actions based on motives and desired outcomes. seem contrived but I needed to keep in mind that this was a different time and place. However, the one assumption I forgot in reading this novel: the narrator may be, or is dishonest. Excellent voice performance.

confusing but you have to relate to context

Narrator was fitting. I imagined he was in that period of time when modernity prevailed.

Would you listen to The Good Soldier again? Why?

If you’ve listened to books by Ford Madox Ford before, how does this one compare?

Ford didn't write enough for me