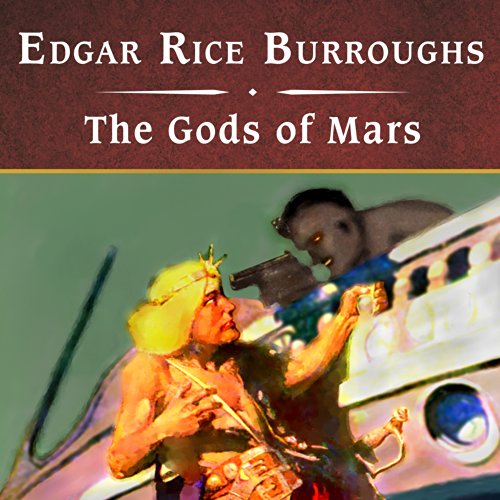 John Carter returns to the red planet 10 years after his Martian death in search of his wife, Princess Dejah Thoris. He joins forces with his old comrades and forms new lifetime alliances as he battles hostile enemies, previously unknown to his people of Barsoom. His adventures reveal the truth about the Gods of Mars.

The second in Burroughs' 11-volume Mars series, a blend of sci-fi and romantic adventure.

I love the ERB John Carter books, but after the Princess of Mars (produced by Books in Motion), this adaptation produced by Tantor and read by John Bolen is awful. Bolen's attempt at a southern accent is pitiful, but even worse is his upturned pitch at the end of each sentence. Pitching tones downward suitably concludes a sentence, but Bolen turns up to a high a note, successfully making it seem as if none of the sentences have periods to end them. His diction and articulation are also abysmal. I will suffer through the whole book, but this is one of the worst narrations I have ever heard.

One of Burroughs best

Burroughs writes one of his best 'sci fi' works in the Martian series in this follow-up to Princess of Mars, etc. At his most inventive and imaginative, full of surprises and action, it is great to read or listen to. I don't think John Bohlen is the best reader, but is adequate. His female voices are hard to understand. Otherwise, this would be 5 star! It's too bad someone doesn't make this series into movies!!

What can I say? The story is excellent, and, as has been stated by other reviewers, holds up well over time (I too read this book as a kid), and I believe that it's because of the qualities displayed by the characters. Qualities like: Loyalty, Bravery, Honor, Open-Mindedness and Love. Qualities that are seemingly on the decline in today's world. It's a story that will appeal to both men and women.

The only thing that detracted from my enjoyment of the story was the accent used by narrator John Bolen. This, I think was due more to the fact that when I "read" the first installment, "A Princess of Mars" (a very good story as well), was narrated by Dennis McKee. So the difference in narrators may have colored my impressions regarding Bolen as reader, because we tend to like the first person used for a story, and any subsequent readers (in the same story line) bother us because their style of reading is different.

Therefore, I recommend that if you want a good story that gets you involved and rooting for the hero, the 'Mars' series is a good place to start.

By the time I finished this second audiobook in the Carter series read by Bolen, I had become a true fan of both Carter and Bolen. I went on to listen to all the others in this series. Highly recommended! Bolen's "southern gentleman" voice is a bit hard to get used to at first but later seems perfect for the tales.

Great story to continue the first. Great reader. Definetly need to read or listen to the first book beifre this one.

OK book, but not as good as the first in the ser

For me, the storyline was too convoluted and the presentation was too theatrical. And if this was the first book in the series, I would not have continued on. However, I am a big fan of the John Carter character, so I will probably listen to more of the books in this series. Hopefully they will be better than this one.

The fantastical and heart breaking tale continues captivating readers with each page. Read this series and tell your friends about it.

Where does The Gods of Mars rank among all the audiobooks you’ve listened to so far?

I like this book some people complained about the southern accent but i thought it brought more to it love the action and the well developed characters.

An annoying triumph of form over substance

Burrough's Mars novels may be my favorite escapist literature of all time. I was not prepared for a reading where the reader adopts a broad southern accent, I guess because John Carter is from Virginia. I would have much preferred a simple straightforward reading. The affected accent is very annoying and detracts from the enjoyment of the story.

An annoying triumph of form over substance

Burrough's Mars novels may be my favorite escapist literature of all time. I was not prepared for a reading where the reader adopts a broad southern accent, I guess because John Carter is from Virginia. I would have much preferred a simple straightforward reading. The affected accent is very annoying and detracts from the enjoyment of the story.