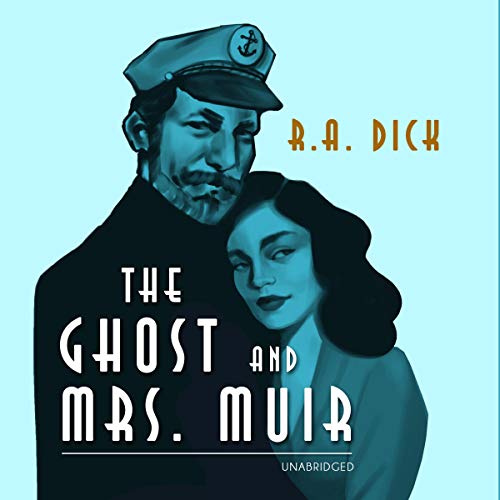 The Ghost and Mrs. Muir

Burdened by debt after her husband's death, Lucy Muir insists on moving into the very cheap Gull Cottage in the quaint seaside village of Whitecliff, despite multiple warnings that the house is haunted. Upon discovering the rumors to be true, the young widow ends up forming a special companionship with the ghost of handsome former sea captain Daniel Gregg. Through the struggles of supporting her children, seeking out romance from the wrong places, and working to publish the captain's story as a book, Blood and Swash, Lucy finds in her secret relationship with Captain Gregg a comfort and blossoming love she never could have predicted.

Originally published in 1945, made into a movie in 1947, and later adapted into a television sitcom in 1968, this romantic tale explores how love can develop without boundaries, both in this life and beyond.

When my father died when I was seven, The Ghost and Mrs. Muir became one of my mother's favorite and most watched movies. Capitan Gregg became one of my role models (along with Cary Grant, Professor Higgins, Atticus Finch, and Albert Einstein) . I have seen the movie many, many, times but only recently noticed it was based upon a novel.

The novel does not have any excitement, action, or even much story. It is basically a romance (with no romance) and only vignettes driving character development. One could successfully argue this is a very boring book, but not to me. I enjoyed the characters (and this narration) as well as the humor and social commentary.

I am often critical of female narrators doing male voices (few can do them well) but Jasicki does a great job on the Captain, as well as the other male characters, and does a perfect job on Mrs. Muir.

I’m a very slow, deliberative reader and listener, who never, ever speeds up a narration, but the difference between this narrator at normal speed and at 1.25 is night and day. The first is languid, almost drunken, and lends an unaccountably snide tone to everything said. The latter is brisk and chipper, so much livelier. Take my word on this one.

I love the movie of The Ghost and Mrs. Muir. I first saw it as a child. After repeated viewings, it never lost the sense of romance and magic I found on my first viewing. I was delighted to find the audiobook of the novel the movie was based on. The audiobook was as enjoyable as the movie although there are a few differences. The story follows Lucy a dutiful young woman of her age, late Victorian/Edwardian. Lucy was a good child, who married and was a good wife. She had two children and was a good mother. When her husband died, she found herself penniless because her husband had gambled with the stock market. Lucy, now a widow, is living with her husband's family who refers to her (to her face) as "poor. little Lucy). They make all her decisions including those for her children.

Lucy suffers a spell of rebelliousness and moves herself and her children to a house overlooking the sea near a village. The house she chooses is very inexpensive because no tenant stays more than 24 hours. The previous owner does not want new tenants. What follows is a lively story, at times full of joy and others heartbreaking but never, ever boring. Elizabeth Jasicki does a very nice job narrating.

Skip the Book, Watch the Movie

The movie is one of my favorites and I looked forward to reading the book, but I stopped half way through. Lucy is pathetically weak in the book and ready to give up her children for the love of another man. Only the ghost of Captain Greg has any sense. Don’t waste your time with the book, just watch the movie. It’s characterizations are much better and the movie is so romantic. I wish I’d never read any part of this book.

Loved it! Different than the movie--in a good way!

I had no idea what to expect. I'd seen the movie years ago, but hadn't read the book.

Although it was set in the forties (I believe), Lucy/Lucia was very modern.

The paranormal was perfect. Just enough to be interesting and almost believable.

Not often I shed a tear at the end of a novel but this beautiful story brought a tear. I listened in one sitting.
A beautiful young woman widowed early in life takes a House by the sea to get away from overbearing relatives and confronts the ghost who for his own reasons haunts the home. It’s a gentle fast moving story. So well written and beautifully read. I knew the story from the film of the sane name, but in listening I heard the original and discovered a fabulous narrator who will bring many other books to my ear.

A Fun Story For All Ages

I first read this story about 40 years ago, it was the first book that I read from cover to cover in one day.
I rediscovered this book recently and have enjoyed listening to it. I've enjoyed the old movie and the tv series.

I remember watching this on TV as a child, Love it then and love the book. I actually found the DVD of this also just so I could see it anytime I wanted. Ive listen to the audio book and will probably do so many times.

What can I say.

The book is much different than the first movie. I cried for a couple minutes and whether out of sadness or sad happiness, I know not.

Entertaining story, great performance. A true classic. There is one curse word spoken periodically by the captain. The D one. This didn't bother me but may bother some.

I've seen both the fim and a theatrical adaptation, enjoying the gentle humour of both. The lifetime of friendship between a widow and the ghost inhabiting her house is a warm one, and very much set in its time.

Lucy Muir has two young children when her husband dies. They must find an affordable new house, and Gull Cottage, mostly because of the supposed haunting by a previous occupant, proves the perfect place for them. Lucy immediately discovers that the haunting is very real, Captain Gregg is a salty, worldly old ghost, who 'allows' her to stay in his house if she promises to leave it to retired sailors in her will.

This is just the start of a lifelong relationship, one that shows affection, care and annoyance, almost a marriage! Lucy watches her children grow up and leave her, sometimes less than appreciatively, and in need of money, it is Captain Gregg who offers her the solution.

Mrs Muir is very much a woman of her time, embarrassed at the thought of using a pawn shop, concerned with appearances. Her son Cyril exemplifies old-fashioned values, daughter Anna pushing for a more modern outlook as Lucy herself ages and wants only their happiness. The oldest of them all, Gregg, sees their lives and wishes in the clearest light of all, with the perspective of a much-travelled and experienced sailor, shocked by nothing.

The unspoken affection (similar in some ways to 'The Remains of the Day') is understated but evident, as Lucy (or 'Lucia' as Gregg calls her) ages, he remains constant.

I didn't question the paranormal element at all, I just enjoyed the nostalgic feeling of the 1940s setting and outlook.

This made a very congenial listen, with a female voice conveying the upper class but slightly naive Lucy at the same time as the salty sea dog Gregg without sounding false. Lucy's voice even aged and matured as she did.

Lovely period piece, even if I could only picture Rex Harrison as Captain Gregg.

With thanks to Nudge Books for providing a sample Audible copy.

A lovely book, easy to listen to. A good narrator, I would highly recommend this book

Loved the film but the book is even better. A great little story of its time.

I adored the old style writing and it is a wonderful story. Thank you very much for this addition to my library

Nice story, crying out for a tv adaptation. A little dated in parts but all the better for it

I rather surprised myself enjoying this gentle story of friendship. An interesting insight also into the social history of the period it was written in.

A truly beautiful love story. Read with great feeling and understanding. Left me with a warm and gentle feeling.

I love this book, I've got a very tatty old copy of it, and I love the film so I jumped at the chance to listen to the audiobook version while doing the housework. But it is completely spoiled by the most awful, slow, drippy narration ever. I got halfway then had to give up. The narrator was doing a good job of making sure the captain wasn't the only ghost in this novel as she proceeded to kill the lot.

Great narrator. an old but good one! love the ending 🥰 Timeless Classic. Brilliant

I love this story. I have seen the film multiple times. A fab narrator really bought the characters to life. Well read and a pleasure you listen to