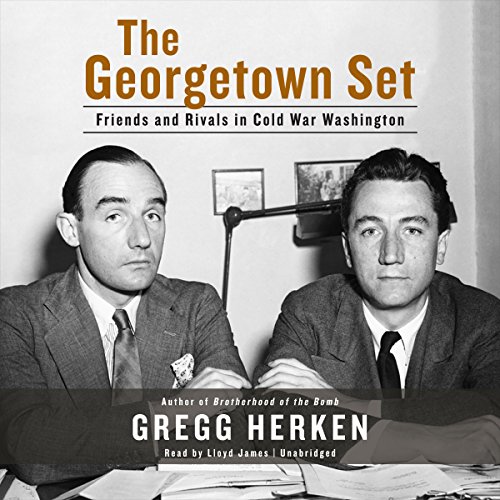 This fascinating, behind-the-scenes history of postwar Washington is a rich and colorful portrait of the close-knit group of journalists, spies, and government officials who waged the Cold War over cocktails and dinner.

In the years after World War II, Georgetown's leafy streets were home to an unlikely group of cold warriors: a coterie of affluent, well-educated, and well-connected civilians who helped steer American strategy from the Marshall Plan through McCarthyism, Vietnam, and the endgame of Watergate. This Georgetown set included Phil and Kay Graham, husband-and-wife publishers of the Washington Post; Joe and Stewart Also, odd-couple brothers who were among the country's premier political pundits; Frank Wisner, a driven, manic-depressive lawyer in charge of CIA covert operations; and a host of diplomats, spies, and scholars. It was a time when presidents made foreign policy in consultation with reporters and professors - often over martinis and hors d'oeuvres - and columnists like the Alsops promoted those policies in the next day's newspapers.

Gregg Herken illuminates the drama of these years and brings this remarkable roster of men and women and their world not only out into the open but vividly to life.

This is in fact a well written, well researched book about how a not very large group of people, who influenced each other, including sitting politicians, and the people who read their articles and essays in respected magazines, and newspapers such as the Washington Post and Newsweek. If people were not invited to the select Sunday suppers, large cocktail parties, then then they did not get the big "scoop", or the hint as to what the American voter is thinking.

It is a bit unsettling that some of these people such as Joe Alsop, who is really fascinating, and very articulate, helped to steer United States into some of the policies that we as a country are still dealing with today, such as Vietnam, and the middle east. Or at least he thought he did. He had the ear of both Kennedy and Johnson, so maybe so. His war reporting from Vietnam is almost funny. But at the time it was published, it was taken with great seriousness and influence.

Listening to the book it is difficult to tell at this time who was using whom, politicians or journalist. The Sunday dinners, cocktail parties, etc. where Big Ideas were discussed and to which only the select were invited is fascinating. Oddly enough Ben Bradley who became editor of the Washington Post is not described as having the best invitation of them all, frequent dinners at the Kennedy White House. His book about that is fascinating.

As combative as things are in Washington now, and as dangerous as the world is now, it is just as well these are not the people dealing with it. Except for Mrs. Graham, the publisher of the Washington Post during the Kennedy and Nixon Administrations. The lady may well be a national treasure.

This is a thoroughly enjoyable recounting of the stories of particularly influential people at pivotal moments in our nation's modern history.

The "underground" of DC

What made the experience of listening to The Georgetown Set the most enjoyable?

The story was interesting and its characters fascinating--it sounded almost fictional. You learn a lot about the closeness of politicians and journalists at a time when no one really seemed to care about objectivity.

Kay Graham's leadership during Watergate and its reporting.

Very much behind the scenes

A good listen for anyone who feels as though they've listened to or read most of the better known titles about the persons and/or events of the mid-20th century. Great development of the lesser known characters of the era. The narration is enjoyable. My only criticism is that early on it sometimes became difficult to follow who was who; a character map would help, but eventually you get a better sense of the biographies of the prominent figures.

Better if you are a WASP

A very enjoyable story about a group of people who did more than they got credit for. Well-written and well read.