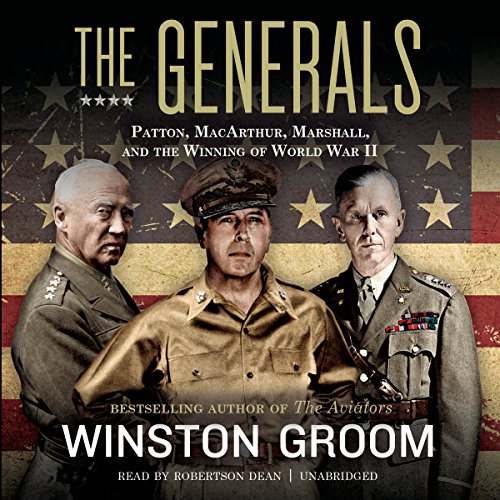 Celebrated historian Winston Groom tells the intertwined and uniquely American tales of George Patton, Douglas MacArthur, and George Marshall - from the World War I battle that shaped them to their greatest achievement: leading the allies to victory in World War II.

These three remarkable men-of-arms, who rose from the gruesome hell of the First World War to become the finest generals of their generation during World War II, redefined America's ideas of military leadership and brought forth a new generation of American soldier. Their efforts revealed to the world the grit and determination that would become synonymous with America in the postwar years.

Virginian George Marshall led his class at the Virginia Military Institute to become the principal planner of the Battle of the Meuse-Argonne, the greatest American operation, which ended the conflict. Afterward, he rose to become the army's chief of staff, where he balanced the volatility of generals such as Patton and MacArthur for the good of the country.

Like Marshall, George Patton, who is remembered as one of the most heroic and controversial generals in American history, overcame early academic difficulties to graduate at the top of his class at West Point. He would build and command the army's burgeoning tank division, lead the successful invasion of North Africa during World War II, and die under mysterious circumstances in 1945.

Douglas MacArthur also graduated at the top of his West Point class and became known as the "bravest man in the US Army" during the First World War, where he was commissioned as the youngest general in the armed forces. He commanded in the Pacific in World War II, where his strategy famously defeated the Empire of Japan.

The Generals contains pocket biographies of Douglas MacArthur, George Patton and George Marshall and traces their lives from their entry into the military through World War I, the inter-war years, World War II and the events after the end of the war. Since all were in the US Army during roughly the same period of time the book also details how their lives and careers became intertwined and how the acts of each affected the others. Since all of these officers were involved in both World War I and World War II, the book provides an overview of both, but with little detail beyond the necessary. Thus the sections on General MacArthur cover his fighting in France in World War I, his time in the Philippines before the start of World War II and his “island hopping” campaign in World War II, but nothing about the strategy involved in winning the war. The sections of General Patton and General Marshall similarly cover their war exploits during both wars, but little else. You will not find any real information about the Navy’s attempt to retake the Pacific islands other than General MacArthur’s distain for their high casualty rates as you will find little about the general strategy used to defeat the Germans, about the German defenses and nothing at all about the Eastern Front in Europe.

For those without any specific knowledge of the careers of these officers, this is a decent place to start. It assumes the reader knows nothing about their careers and describes their rise from Lieutenant to General and how each officer knew the others, their strengths and weaknesses. This book does not provide any information critical of the three and nothing about the internal allied conflicts concerning how to win the war. All three men are generally presented in a favorable light. For those who already know much of their careers and how they affected the victory in World War II there is nothing new here. In fact the author uses existing biographies of these men as attributed source material and, as such, a reader familiar with some of those books will find themselves listening to descriptions of events that they already know from the other books. For example, Mr Groom uses William Manchester’s American Caesar for much of the material on Douglas MacArthur and I, being familiar with that book, heard many passages quoted verbatim from it in describing events involving him.

This is not a heavy book in the sense of being dense with material. At 20 hours the book may seem long but, since it involves three biographies and descriptions of the war, that really breaks down to about 6 hours for each bio plus 2 hours for war and historic coverage. Seen like this it does not seem like a very detailed book. The book covers the main facts of the war clearly and mostly accurately although there are some factual errors - Eva Braun died by her own hand and was not killed by someone else and George Patton did not “spit” into the Rhine when he crossed, but was well known for, and photographed doing, something much more disrespectful toward Germany. Still, while the book was a disappointment for me since it provided no new information, I could recommend it for anyone interested as a decent starting point. As with me, for anyone already familiar with these generals and the war, this book holds nothing new and would probably also be a disappointment.

For those interested in more detailed information about these men I would recommend William Manchester’s American Caesar (Douglas MacArthur), Ladislas Farago’s Ordeal and Triumph (George Patton) and Debi and Irwin Unger’s George Marshall: A Biography. There are too many books about World War II for me to make any single recommendation.

The writing is quite good and the narration is well suited to the material. A four star book for those with no background on the subjects but a disappointment for those with detailed knowledge of the three great generals and their contributions to Allied victory in the war. Hence the three star rating.

Interesting and a great narrative

Winston Groom has written interwoven biographies of three great American Military leaders of the 20th Century. I have read a number of Groom’s books in the past; one of his books was nominated for the Pulitzer Prize. Many of his books were about leaders in the aviation field.

I have read extensively about all three of these famous generals, Patton and Marshall were two of my favorite generals. Surprisingly I found new information about all three generals, which alone make the book worth reading. The biographies of each general all touch the main highlights of each man’s career.

The three generals are all extremely interesting and have contrasting personalities so they are easy to follow. Patton the most flamboyant of the three developed the essentials of tank warfare in World War One then applied the knowledge with expertise in World War Two. Marshall is the only team player of the three men, he became type cast in World War One as a staff officer, and he was a brilliant strategic planner and also a genius at organizing logistics, personnel and supply. He was Chief of Staff in WWII and devised the Marshall Plan as Secretary of State and also served as Secretary of Defense. MacArthur was consider to be the greatest of our field generals but like Marshall his greatest achievements came after the War, in creating the groundwork for modern Japan. Groom follows each man from youth to end of career. Groom points out that each man was extremely knowledgeable in history, all were prolific readers and all wrote poetry with Patton being the most prolific poet. They grew up at a time when poetry was very popular and everyone wrote poetry.

The book is well written and meticulously researched. The author has the skills of a novelist in sense of timing and scene building. If you enjoy history this book is for you. Robertson Dean did an excellent job narrating the book. The book is fairly long at about 16 hours.

Wish it was longer

Wish it was longer! Will have to buy individual bios now of these three American legends!

Excellent in every way. I have read a good deal on Patton and to a lesser extent MacArthur, but found the material on Marshal to be all the more interesting. An honest and in some ways brutal telling of these great Generals. Their gifts as well as their flaws.

When writing a history of someone it's important to tell the good, the bad, and everything in between. This book accomplishes this while providing personal and professional details of these great Generals. Excellent read! Of course, there is no better narrator than Robertson Dean. This is my third audiobook he has read. He is excellent!
Very informative and enjoyable read. I recommend it to anyone interested in military history or history in general.

Would you consider the audio edition of The Generals to be better than the print version?

I cannot answer as I did not read the print version.

My favorite character would be General Patton. Probably because I have read more about him that of General MacArthur or General Marshall

What does Robertson Dean bring to the story that you wouldn’t experience if you just read the book?

Very moving when reading about the demise of each General.

Hard to put down, but have to work sometime.

nothing particularly original and not a very thorough explanation of the war but a good telling of 3 men's lives as they acted and acted with one another. I would love to have seen the same thing with Eisenhower Bradley and Nimitz's lives

Many factual errors but entertaining

Fine writing but the author glossed over many of the faults of his subjects, especially McArthur.

This is an outstanding book on U.S. history of the 20th century as it relates to foreign relations and warfare. it is in-deprh and entertaining.