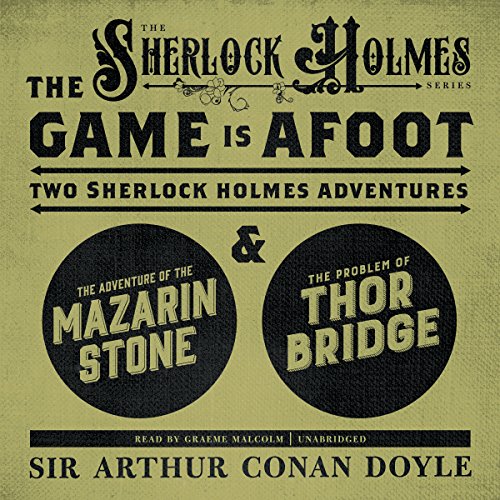 The Game Is Afoot

This collection featuring legendary consulting detective Sherlock Holmes includes the short stories "The Adventure of the Mazarin Stone" and "The Problem of Thor Bridge".

In "The Adventure of theMazarin Stone", Dr. Watson arrives at 221B Baker Street to find his old friend and colleague keen on a case. Holmes has taken it upon himself to find the missing Crown diamond, the Mazarin stone, which has been stolen by swarthy big-game hunter Count Negretto Sylvius. When the count pays Holmes a visit, the brilliant detective must rely on his cleverness to learn the jewel's location and wrap up the case.

In "The Problem of Thor Bridge", Neil Gibson, who has earned the nickname the Gold King for his status as the world's greatest gold-mining magnate, seeks Holmes' help in finding his wife's real killer. His governess, Miss Dunbar, has been convicted of the crime due to an abundance of evidence against her - including a gun in her wardrobe - but Gibson believes her innocent. A few enlightening revelations, including the unhappy state of the Gibsons' marriage, lead Holmes and Watson down the path toward the truth.