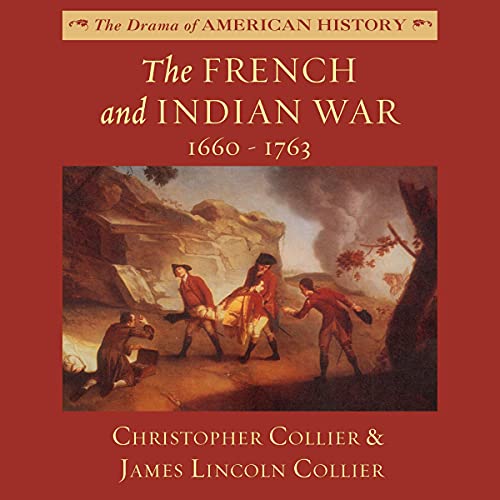 The French and Indian War: 1660-1763 covers much more than the few years during which the English and French fought over the division of the North American continent in one of the most neglected periods of American history. In this volume in the Drama of American History series, authors Christopher Collier and James Lincoln Collier trace how England’s other rivals for control of America were eliminated over this period until the only source of conflict left would be between the British and their own colonists. This volume offers a fairly unique approach to American history by focusing on core content rather than a blizzard of names and dates, giving listeners a good sense of not only what happened, but why, as England eliminated its competition.

History is dramatic - and the renowned, award-winning authors Christopher Collier and James Lincoln Collier demonstrate this in a compelling series aimed at young readers. Covering American history from the founding of Jamestown through present day, these volumes explore far beyond the dates and events of a historical chronicle to present a moving illumination of the ideas, opinions, attitudes and tribulations that led to the birth of this great nation.

Great overview of a less-known series of conflicts

This is the first in this history series I have listened to, but I'm impressed. My husband and I listened to this in the car with our 16 year old. We all really liked it and learned a lot. I believe it is aimed at high schoolers, but the adults enjoyed it just as well. It held all of our interest, and we all thought it was a good level of detail.

The subject is very interesting -- it can be argued that without these war(s), George Washington wouldn't have come to prominence, or the American colonies thought of seeking their independence from Britain.

The narrator was quite good and held our interest without stealing the show.

An Excellent Overview of the Time Period

A very informative presentation of the period from 1660 to 1763. After listening, I have a much better understanding of the domestic and foreign forces that led to our eventual independence from England. I look forward to listening to other books in this series.

Loved this little book. It hits the highlights in a speedy fashion that can't help but keep your interest. I intend to get more books by this author.

Absolutely superior teaching material especially in less than 2 hours, I've finally gained a comfortable feeling of understanding this essential period of events. Of all my other books and hours of inquisitive self-learning, until now, I've not acquired satisfactory understanding. This lesson sealed the deal for me. I can now proceed (again) through advanced readings of our historical beginnings with more pleasure.
I actually don't feel so dumb anymore, for I'm becoming convinced that the accurate material from historians covering this period (and many others for that matter) didn't really exist until recently. At least not as academic, bias free, comprehensive yet presentable in a short nugget all the big-picture essentials as the authors have done here, in such an agreeable, common sense like method.
Bottom line: Don't wait as long as I did before acquiring and devouring this truely exceptional material. Highly recommended - all the Collier 2-hr American History lessons are great.

Learned a great deal in less than 2 hours

Great lecture on the French and Indian war. I knew very little about it before I bought this course. Great job and thank you!!!

One hundred thousand foot view of the war

Lots of good general background info but spent less than 20 minutes talking about the actual war. The historian in me was very disappointed.