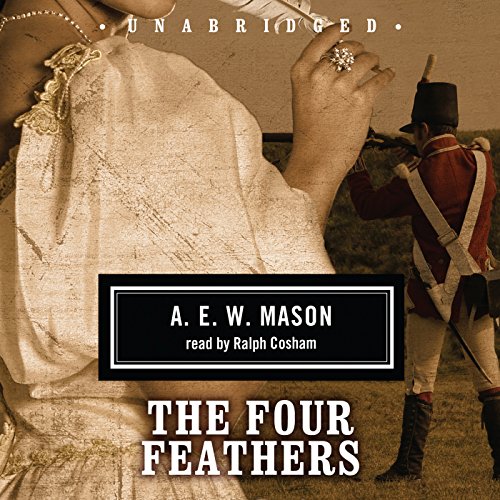 Just before his regiment sails off to war in the Sudan, British officer Harry Feversham quits the military. He is immediately given four white feathers as symbols of cowardice, one by each of his three best friends and one by his fiancée.

To disprove this grave dishonor, Harry dons an Arabian disguise and leaves for the Sudan, where he anonymously comes to the aid of his three friends, saving each of their lives. Having proven his bravery, Harry returns to England, hoping to regain the love and respect of his fiancée.

This suspenseful tale movingly depicts a distinctive code of honor that was deeply valued and strongly promoted by the British during the height of their imperial power.

This story is a Victorian Era classic and was published just a year after the passing of that monarch. The story is very realistic, very deep, and keeps you on the edge of suspense. The reader is perfect for the story, not only because of his British accent but his professional reading and differentiation of voices that make your forget that it is one man reading. The story will not disappoint you.

Beautiful novel - I had heard this was so much better than the movie, but it far exceeded my expectations. Elegant, but accessible literature. The characters are by far more of the focus than the war. Especially good as an audiobook, which is helped by the great reader.

I saw the movie about 1948-9, again in 1979 it was and remains one of my favortites. The book was a shock in that it bore absolutely no relationship to the movie except the characters had the same names and the plot in parts had a simiilar theme, notwithstanding; the use of the language is superb as is the narration.It will remain one of my favorite books

Great story, brillliant writing, read by one of the best narrators in the audio book world I give it my highest rating.

Okay the language is a little flowery for my liking. Ralph Cosham accent is interesting and adequate. The story could move faster, but I am glad it didn't as it is a book about feelings, ideas, the desert, atonement and honour. These things don't come in 'Boys Own Adventures' and action packed novels and definitely without time to fester. If you die-sect this book you might see the 'Heroes Journey' or basic success through determination but it is more than that. Much of the story is through conversations and the characters thoughts. Much of the story moves not around the central character, Harry but through his love interest and close friends.The book is so much better than any of the movies. Worth the listen to over a summer holiday in your favourite armchair.

To be perfectly honest I bought the book on sale because I liked the 1939 movie starring Ralph Richardson. It's a 1902 vintage serialized book written about the Mahdist Wars in the Sudan beginning in 1882 and covering the next 7 years, including the death of Gordon of Khartoum.

The plot is long and convoluted involving 5 primary male characters, 2 primary female characters and 3 secondary male characters, all of who have some participation in returning the titular 3 small and 1 large white feathers. The white feathers signify that the senders accuse the recipient of cowardice. The majority of the novel is what follows once the feathers are received. If you have seen any of the movies you may have a general idea of what follows, (except the 2002 version which was complete revisionist crap having no relationship to either actual history nor the spirit of the book).

The book's plots are much more involved and interesting than any of the movies. Still the characters are your standard British upper class stiff upper lip, but - with a touch of humanity. A classic example of popular literature 110 years ago, well done with excellent narration.

History changes as the facts remain the same.

This story remains strong although it's a older book. There have been numerous movies of it, which have taken completely different stances about what war is, accomplishes, does and cannot do. But it is still compelling and compellingly told.

if you love British period romances involving clubbable upper-class gentlemen; spirited yet fiercely-loyal most beautiful girls in town; gruff fathers and their sensitive and modest sons; gentlemen who cannot rest until their honor is restored, not just in the eyes of society, but in their own hearts; and so many more Britishy things that you'll actually learn a little niche war history if you're not careful; then you need to listen to this!

Plus, it's Ralph Cosham. He makes it, if possible, even more romantic and Britishy.

Cosham does a first rate job reading this old classic. Honor and bravery, love and loyalty are the themes. Scotland and the Sudan are the settings. Very good character study with beautifully descriptive narrative. Great use of vocabulary, like Thomas Hardy.

I read the story several years ago and then say the movie. Obviously I was disappointed with the movie. Recently saw the movie again and decided to read the book again. What a great book, I love the reader, have listened to him with other books, he is wonderful. I encourage ALL to read or listen to this book.

Highly recommended book. A lovely story of redemption, with the hero coming through for the good of the friends who spurned him. A classic adventure in similar vein to 'Beau Geste' that is excellently narrated.

a book that takes you back to a bygone era of chivalry and friendship and honour. after watching the film years ago I decided I needed to read the book and was not disappointed. take the opportunity and have a good read.