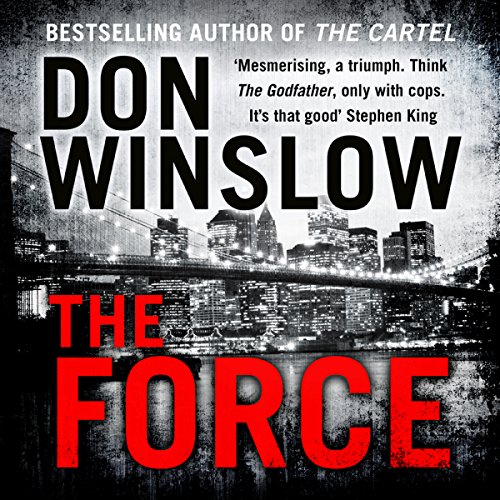 From the New York Times best-selling author of The Cartel - winner of the Ian Fleming Steel Dagger Award for Best Thriller of the Year - comes The Force, a cinematic epic as explosive, powerful, and unforgettable as The Wire.

Detective sergeant Denny Malone leads an elite unit to fight gangs, drugs and guns in New York. For 18 years he's been on the front lines, doing whatever it takes to survive in a city built by ambition and corruption, where no one is clean.

What only a few know is that Denny Malone himself is dirty: he and his partners have stolen millions of dollars in drugs and cash. Now he's caught in a trap and being squeezed by the Feds, and he must walk a thin line of betrayal, while the city teeters on the brink of a racial conflagration that could destroy them all.

Don Winslow's latest novel is a haunting story of greed and violence, inequality and race, and a searing portrait of a city on the edge of an abyss. Full of shocking twists, this is a morally complex and riveting dissection of the controversial issues confronting society today.

"Nobody understands the disaster of corruption better than Don Winslow. The Force exposes the dawning horror of how it eats into the best intentions." (Val McDermid, number one best-selling author of Out of Bounds)
"A stunner of a cop novel with dialogue, gritty New York setting and moral pincers all in the service of a devastating plot." ( The New York Times)
"Intensely human in its tragic details, positively Shakespearian in its epic sweep - probably the best cop novel ever written." (Lee Child)

Searing and savage, heartbreaking and shocking in equal measure. The opening chapters lure you in as forcefully as the smack so central to the story and the energy doesn't stop until the sad, final end. Superbly narrated with a cast of characters that reflect the complex mix of the great City, without becoming cliches. I thought nothing could top the tearful tragic love story of Mexico told through The Cartel, but this brilliant work is perhaps a greater masterpiece, a fine and fiery indictment of the world we live in. Best book I've read in ages.

I really liked the Gentlemen's Hour and Cool Breeze because of the fresh if caustic style and non-pc story lines and characters. Then I listened to and enjoyed the first and second of the Dog series, but couldn’t get more than an hour or so into The Border before boredom and impatience overcame my interest. The same scenes repeated over and over and the relationships subplots that are just irritating and lame. All men violent and cruel but abiding by some frankly inconceivable code of honor and all the women either whores or stunningly hot and self important paragons of virtue. I guess DW got onto a good thing and is now just repeating the formula like everyone else. The Force is just more of the same and the last DW download for me. Too bad. At least the first two books were great and recommended but avoid addiction.

Our main character is an egotistical dirty cop whose long and arduous slide into hell is documented in true Winslow detail. He is only able to escape by climbing over the backs of others sliding faster than him into the abyss. The suspense is all there as well as the violence and graphic language. None of the characters are very admirable especially for me who happens to have respect for the NYPD, but like Art Keller (The Cartel) there is a very believable grain of truth that runs through them. Recommended listen for those who like there grit served with a large portion of raw realism.

Denny Malone is a badass...

... but I expected this book to be much better having read the rave reviews. The Force chronicles the rise and fall of New York elite cop Denny Malone, tackling themes like corruption and the urban drug trade, but it does so without breaking any new ground. It's decent entertainment all the way through, but I must admit I was thoroughly underwhelmed.

The narrator does a good job of all the different accents and voices, but only really enforces the cliches and stereotypes (though only the author is really to blame for this).

Don Winslow is hailed as a master in the genre, but if that is indeed the case, his lesser collegues must write some awful books. I give it three stars only because it kept me interested enough to keep me listening to the end.

Not as goods as the Cartel

Not the most exciting book I've "red". But it is well narrated. Well, I listene to end of the book.

Simply amazing book. One listen is not enough. The narrator is awesome. Brilliant storytelling 😎

Relentless corruption. Where are the good guys?

Where does The Force rank among all the audiobooks you’ve listened to so far?

I was gripped for most of the book. I'd say it was the fastest I have ever listened to an audio book . You feel like you've heard it all before though, tough cops, loyal crew led by a Cop Superman.

He didn't seem to know how to end it and it rambled through many unbelievable alley ways.

I got tired of the excitable relentless, breathy, tough guy talk.
That said, it's a very good yarn and he kept my attention

This is a very good book but........I'd only spoil it if I elaborate further.
Worth a listen and I'll look out for more of his books. I'd already bought the Power of the Dog and Cartel in paperback as they are highly recommended and are not yet available on Audio.

Good story, great narrator. But all the "said" takes away from the flow. The ending was not for me.

After reading great reviews, I had high hopes. I found the story to be a blend of the wire, the shield and the Sopranos rolled into one. The story was predictable and you knew how it was going to end after a few chapters.
The narration was okay, the only thing that was slightly irritating was the fake boston accent, condidering he was meant to be from New York. It came across as a put on Mark Walbergh impression.

Very well narrated, this excellent story kept me interested throughout, with a well structured tempo. Sometimes the story goes where you'd expect, but not often.

Best book and narrator I've listened to yet. A rollercoaster that doesn't disappoint. Highly recommended

this one has zero storyline zero plot. the narrator reads at 100mph like he cant wait to finish it and get his pay. dreadful waste of money.

I loved the narrator style and how the story was told, was quite captivating.

13 hours and 26 minutes of my life I'll never get back. Only joking.

It's been a few years since I read anything by Don Winslow, despite seeming to accumulate his latest books whenever they get released. Far too long really and a mistake I won't make again going forward.

The Force is pretty special ........ New York cops, an elite team let by a man with a massive ego and balls that he probably carts around in a wheelbarrow - Denny Malone. Malone and his crew are tough and charged with keeping the streets safe and they're dirty.

Complex, layered, and one which left this reader conflicted.

Not a lot of black and white, loads of grey on display, with plenty of compromises and accommodations and ambiguity. Malone is interesting as a character, but he's not particularly likable. He gets bad guys off the streets, but he fills his pockets at the same time. He inspires loyalty and his guys would run through brick walls for him. He's the alpha male in the pack with an ego to boot. He treats his wife appallingly, but professes to love her. He has enemies within and outside of the force and when his nuts are caught in a vice. He has a choice.... hobson's choice maybe.

One to read again in print at some point in the future. This audible version had a fantastic narration by Dion Graham. There's a real intensity and passion to his narration that puts you in the head of Malone and which drives the book forward.

As well as an examination of one man's choices and conflicts and weaknesses. There's also a wider look at how a police force operates within a community, how it serves those people and sometimes fails them. How there's a real us and them mentality within the force and that the badge and motto to protect and serve, only goes so far and can be subverted to self interest - protect the force and close ranks. Similarly the City Hall powers operate in a bubble, concerned with appearances and presentation. Image more important than justice, fairness or truth.

I'm in slight disagreement with Lee Child and Linwood Barclay over whether this is the best cop novel ever. I think I'd go with Ellroy's LA Confidential ahead of this one. It's close though.