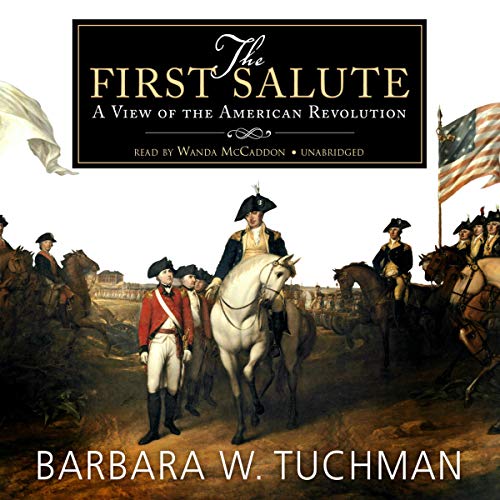 Two-time winner of the Pulitzer Prize and best-selling author Barbara W. Tuchman analyzes the American Revolution in a brilliantly original way, placing the war in the historical context of the centuries-long conflicts between England and both France and Holland.

This compellingly written history presents a fresh, new view of the events that led from the first foreign salute to American nationhood in 1776 to the last campaign of the Revolution five years later. It paints a magnificent portrait of General George Washington and recounts in riveting detail the events responsible for the birth of our nation.

"Blackstone's inspired pairing of narrator Nadia May with the work of Barbara Tuchman introduces a new generation to...one of the twentieth century's most popular and esteemed historians." (AudioFile)

Before I start my review I have to say that I have loved the works of Tuchman since Highschool and owned this same work by the same narrator (on audio tape) for years. It seems that no sooner than I go out and buy a converter to convert my tapes into MP3 than Audible comes out with this ;-).

This is Tuchman's history of the American revolution focusing on the naval aspects. It is an excellent and interesting take on the revolution from an interesting perspective. Tuchman is attracted to the Irrational in Human Affairs and finds much fodder for her interest in the actions of the British during the revolution. This leads her to indulge in sweeping statements of human nature and political philosophy which get a little tedious. She also indulges her tendency to tangential anecdote including a complete history of the Dutch war of independence from Spain and an in depth review of the careers of many actors going back decades before the events at the center of her book. However, this is forgivable as her analysis is interesting, clear, and generally logical. Also, the writing style is brilliant and engaging.

The narration by Nadia May is exceptional (that said, some people do not like her voice -a love it or hate it sort of thing so try the sample). She is clear and easy to understand with very good inflection.

While this is not the best of Tuchman, it is brilliant and interesting and well worth the listening. I can recommend it to anyone with an interest in Naval History, The American Revolution, or European History. The book is good for most reading levels from seniors in high-school on up.

This is a wonderful read if you are interested in excruciating details about the events leading up to the American Revolution and the Revolution itself. I have never read a book on the AR that captures the European background and the Revolution's progress through the battles and events, for some time, after the Yorktown surrender. If you like European and U.S. history I highly recommend this book

Sometime the other view is what we need.

I really enjoyed this book and decided to write the review only after reading the criticisms. If you judge the book by the 1st negative review you will be missing a bright and insightful view of history. To most of the world our revolution was a little thing to be viewed with curiosity more then intrigue, I think one reason is that no one expected us to win. This is a good book worth of your time.

Good, but not her best

I first read Ms. Tuchman in "The Guns of August." I was impressed with her ability to tell a story and to keep me on a tether by showing how one important fact or event inevitably led to the next. In "The Guns of August" she clearly showed the line of reasoning from Edward VII's efforts to improve relations with France to that policy causing jealousy on the part of Kaiser Wilhelm. From there it was easy to see how a slighted Kaiser moved inexorably toward war with its promise of reasserting German diplomatic supremacy on the continent. "The First Salute" tells a wonderful story of how the United States was first recognized as an independent nation by the firing of a signal gun in the port of Dutch-owned St. Eustatious and the ramifications of that action on English-Dutch relations. The first few chapters tell the story of the governor of the island, his decision to recognize an American ship that sailed into his harbor, the history of the island, etc. But then the rest of the book broke off into separate stories of the War of Independence, biographies of some of the major players (like Rodney, Cornwallis, etc), how the French were convinced to come in on the Americans' side, pushing the decision at Yorktown, etc. All in all, very convoluted if not superfluous or confusing.


The title led me to believe that the book would be more about the new nation's path to recognition in the world, rather than its struggle for independence. It isn't a bad book, but it could have been better. The chapters about the Dutch and the First Salute should have been bolstered by further stories of how America found recognition around the world as a new country, or they should have formed a section of a larger work on the history of the Revolution. Ms. Tuchman's skills are great but the book could have been better organized or the title changed to reflect the real main plot. Buy it anyway. It's a great story and Ms. Tuchman's perspective on the British officers is refreshing.

I'm sure this is a fine book for someone across the pond that speaks the "Queens English". But for an American that is a little older and has less than perfect hearing it was very hard to follow. I found myself concentrating on understanding each word and that caused me unable to grasp the narrative. I've listened to probably ~50 books and have never had this issue. I use Audible while driving. The only times I could understand the narrative is if I wasn't using the air conditioning on more than halfway or had the window open. Due to the fact the the British put strong emphasis on every couple words and then drop down every other couple words, the volume would either be too high or too low. Their was not a middle level that worked for me. I did listen to the preview before I downloaded, but that did not indicate to me that I would have an issue. I would not recommend downloading this book unless, at the very least, you plan to use ear buds. Didn't finish the book and will be seeking to get my credit back.

Not one of Tuchman's best.

I enjoyed the history of the Netherlands in the Revolutionary War. I don't think that story has been told before.
I think the story dragged on for a long ways not seeming to get anywhere. When would the war start? etc.

The view of Europe on the British predicament was the best. What would Washington do was not that interesting.

Did Nadia May do a good job differentiating all the characters? How?

She has a voice like Audrey Hepburn so if that matches your view of how George Washington talked than yes she did fine.

Did The First Salute inspire you to do anything?

Read more about the early years of our nation.

Deep in History, Not American history

I am an avid reader of history and truly enjoy most of everything written about the American Revolution. This book however was a horrid waste of time if looking for another perspective of the Revolutionary War.
A more apt title would have been "A Brief Naval History of the Dutch and English 1640-1790". Most likely, this WAS the title at some point, but it was changed in order to cash in on the newfound interest in the Revolutionary War created by recent publications on the topic.
This book contained very few and far between references to the War of Independence, concentrating mostly on the Dutch and English Naval exploits taking place before, during and after. In doing so, the story was fragmented and jumped back and forth in time. I must admit that it has a few intersting and little known facts of how the Dutch influenced the war, yet that was not what I thought I was buying.
I enjoy Eurpean History, but not when I have been sold American History by the synopsis of a book.

This Review Needs a Title...So, I

Cushman was a wonderful writer. Most of her books are well researched, well written, and a delight. The First Salute is no exception. This audio version is wonderfully done. It is thoroughly enjoyable and an excellent version.

What you never knew about the Revolution

This excellent book contains hundreds of details and insights into the backstory of the American Revolution that I've never encountered in one volume. If you think the major battles were only those on American shores, you'll think differently after this book. It is heavily focused on the international political and military story that brought England to war with her colonies and how the European and Caribbean theaters influenced the ultimate outcome. Bringing so much desperate history into focus is no easy task but our writer does so deftly. Occasionally the book bogs into detail but not for long and it never over indulges in one specific area for too long. The narrator is excellent and obviously well acquainted with the rhythms of the author. Both highly rated.