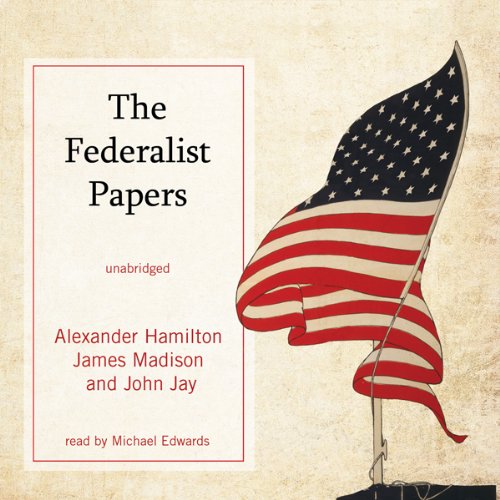 The US Constitution was approved by the Constitutional Convention on September 17, 1787. It was to become law only if it was ratified by nine of the 13 states. New York was a key state, but it contained strong forces opposing the Constitution. A series of eighty-five letters appeared in New York City newspapers between October 1787 and August 1788 urging support for the Constitution. These letters remain the first and most authoritative commentary on the American concept of federal government.

Later known as The Federalist Papers, they were published under the pseudonym ‘Publius,’ although written by Alexander Hamilton, James Madison, and John Jay.

If your interested in this one, get this one when Audible has their two for one sale. It's definitely worth a half a credit for its line by line dissection of the American Constitution, good Age of Enlightenment arguments, and this makes for a much better listen than a read since there is a lot of redundancy between some of the essays and easier to tune out and focus on my bicycle riding during the redundant parts. It's hard not to like a book in which the authors assume the reader knows their Greek, Roman and 17th century European history inside and out.

The writing from 1788 sounds as if could have been written today with surprisingly few archaic words or stilted phrasing. Good argumentation never goes out of style.

The text is well worth listening to to understand what the issues were regarding adoption of the US Constitution and as a guide to what the founding fathers were wrestling with. The biggest surprise to me was that we're still wrestling with many of the same issues today. There are several places in the text where 10 or 20 seconds of text are repeated - editing errors that detract slightly, and the narration is a bit dry, but this is still a worthwhile listen.

Pretty good for a political document

This book was on some list of recommended books I had in high school, and has been on my list of books to read most of the time ever since. I think for a while I decided it would be impossible to find and/or too boring to read, or else it just got lost in some update of the written list. But eventually I decided I had to put it back.

Mercifully, it wasn’t as boring as all that. I am not that fond of politics in general, so it only gets 4 stars. But this audiobook was well done, so that helped a lot. Except that there were numerous cases – like a lot – where a sentence was repeated twice in a row. Not that big a problem; If I had been reading it in a print version, I would probably have had to read every sentence twice and some of them more than that just to understand them. But if the extra sentences had all been deleted, probably the length of the whole performance could have been cut by half an hour or more. I assume this was an editing thing.

Anyway, The Federalist Papers is a series of essays which originally appeared as newspaper articles around the country during the time when the states were deciding whether to ratify the new Constitution. Though they were all signed ‘Publius’ in an attempt to effect anonymity, the individual essays were written by Alexander Hamilton, John Jay, or James Madison, and contain all the reasons why the Constitution should be ratified. Some of the objections they are trying to answer seem silly today. Some of their considerations are now out of date, having been remedied by subsequent amendments, particularly the Bill of Rights, which was added later. Some have been rendered moot by the ways life and/or society has changed since the 1780’s. But on the whole, the Constitution they were boosting seems to have held up pretty well, especially considering some of the things it has been put through.

A perfect snap shot of the contrasting mindsets of Madison and Hamilton making the case for federalism.

Well written. More commercial and secular than I expected.

On a technical note, this audio version is poor. There was about 20 instances where the reader read the same sentence twice.

As to the substance, it was shockingly good. The legal analysis was persuasive. The founders were very clearheaded about future leaders need to bend the language of the Constitution to address some crisis, and they drafted the language anticipating the most tempting misconstructions. The geopolitical analysis was also impressive.

I was expecting a lot more contentless rhetoric and appeals to divine authority. The document was mostly secular. I was also surprised by the priority placed on commercial interests in the early papers.

I admit it got boring. And Hamilton got a little testy toward the end. But I hope reading good legal writing improves my writing. This was worth the investment of time.

How to equate the Federalist paper's to today, is important, and the only reason I'm slogging through an extremely boring rendition by the narrator.

A Must Read to Understand the US Constitution

The reading style is clear, and conducive to listening with attention.

Not worth the time. Unless you are an avid historian, reading this will be easier than listening

Powerful document from brilliant founders. Many points of repetition in the recording. Please fix for future listeners.

The information contained is obvious. The reading is abysmal. At times, it sounds like the person reading is speaking through a thick cloth and is at all times the most boring narrator I've ever heard.