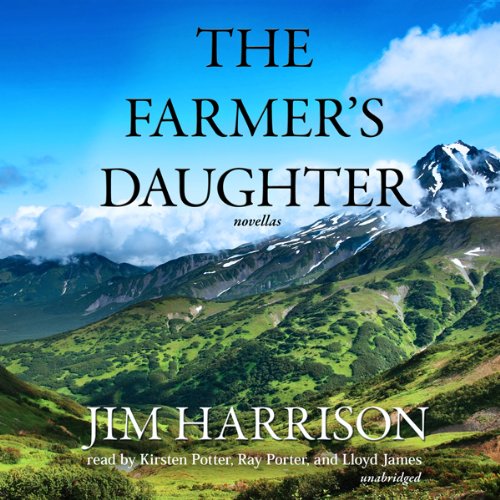 The collection’s title novella, "The Farmer’s Daughter,” opens in the unforgettable voice of a 15-year-old girl living a life of solitude in rural Montana, where she has recently moved. Home-schooled by parents who don’t fully understand her, she finds escape in the rapture of playing piano and exploring the gorgeous countryside on her horse. Several important mentors teach her that there’s more to life than her fundamentalist mother wants her to know—and then her mother runs off with another man, leaving the girl to deal mostly alone with an unexpected assault that tests her mettle just as she was supposed to begin a normal teenage life.

In the next novella, Harrison picks up the thread of beloved recurring character Brown Dog, who when we last saw him was in Toronto to save his developmentally disabled adopted daughter, Berry, from being locked in an institution. But Toronto has run out of welcome, and Brown Dog and an unexpected benefactor hatch a crazy plan to sneak Berry back into the States on the tour bus of an Indian rock band called Thunderskins.

Harrison’s final tale, "Games of Night," is the memoir of a retired lycanthrope in contemporary times. Misdiagnosed with a rare blood disorder brought on by the bite of a Mexican hummingbird, the protagonist attempts to lead a normal life, one that is nevertheless punctuated by hazy, feverish episodes of epic lust, physical appetite, athletic exertions, and outbursts of violence under the full moon.

©2010 Jim Harrison (P)2010 Blackstone Audio, Inc.
Antologie e racconti brevi
Mostra di più Mostra meno
The Farmer’s Daughter is a memorable portrait of three decidedly unconventional American lives. With wit, poignancy, and an unbounded love for his characters, Jim Harrison has again reminded us why he is one of the most cherished and important authors at work today.
“Harrison (Legends of the Fall) shows he is still at the top of his game with these compressed gems. Taken together, they present another fine accomplishment in a storied career.” ( Publishers Weekly)

I find these stories disturbing because it seems the author is a latent pedophile. I find it hard to believe he got four star reviews.

I really liked this collection. Good stories and good narration.
Stories were diverse and interesting. Loved the title story best.