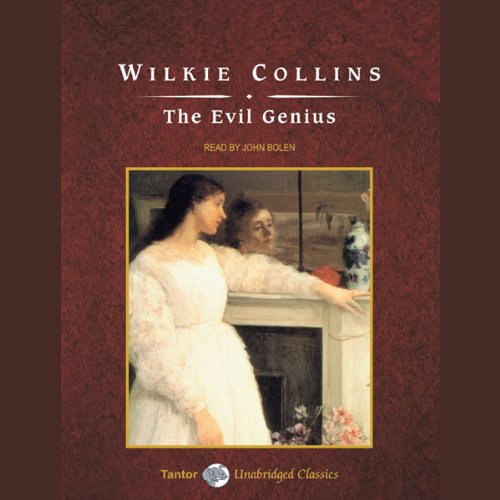 Wilkie Collins' most financially successful novel, The Evil Genius, opens with a jury determining the fate of a sea captain whose ship allegedly facilitated a diamond theft. The story develops into a powerful novel of Victorian private life, including deception, adultery, and divorce.

An 'evil genius' is threatening to rip apart the fabric of the Linley home. Who is it and why? Is it the orphaned young governess for whom the father lusts; the brother-in-law who appears to help everyone, but often succeeds in making things worse; the meddling mother-in-law whose good-intentioned interferences lead to greater heartache; the disloyal father, or perhaps the unassuming daughter?

Story is fine, but not a mystery.

I think the description is misleading. The novel begins as if it will be a mystery (like The Moonstone or The Woman in White)but the "mystery" only introduces the main character and is never explored after that. Enjoyable nevertheless, except for the narrator whose women's voices made me cringe.

Lest any reader be deceived by the title of this book, the "evil genius" refers to a general evil spirit or bad influence among the characters, rather than one malevolent person. This is a fairly well-written Victorian melodrama. Interest in the storyline is impeded by narration which is so ridiculously inept, so comically bad, as to induce amazed laughter. Personally, if it were my job to choose a narrator for a novel set in Victorian England and Scotland, I would not choose an American reader with a speech impediment. The Scottish characters sound like an amalgamation of a Swedish Chef, Charlie Chan and the Lucky Charms Leprecaun. The female characters are voiced in breathy falsetto. Every word ending in "ing" is mispronounced. "Singing while walking in the evening" sounds like "Singeen while walkeen in the eveneen." Amazingly, the story was interesting enough for me to accept and overlook these annoyances.
Far better novels available from Audible with similar themes and plotlines comprise The Forsyte Saga, by (Nobel Prize winner) John Galsworthy. The narration of these novels is far better as well.

liked the story. The reader was strange though. First of all, I would have preferred it be read by an English man instead of an American one. The reader changed his voice for the characters in a way that was distracting and sometimes ridiculous. He pronounced Edinburgh wrong and it's that kind of simple thing that makes you lose confidence in the reader. His intonation was often off, too. So, though I enjoyed this simple tale, I would have much preferred it to be read by Simon Vance or Martin Jarvis.

I really enjoy Wilkie Collins' Vistorian potboilers; they're full of sly humor and mysterious doings, and his characterizations are great. Too bad I couldn't get past the reading on this one. As said by previous reviewer, women's voices are cringeworthy. So are the rest. Weird accents and a delivery that makes me suspect that reader was seeing the book for the first time. Had to give up.

This novel is quite a surprise. It's stars with the trial and conviction of a sea captain. But the novel is not about that sea captain at all. His fate is quickly dealt with and the novel deals with his daughter, Sydney Westerfield and how her life is affected by what happens in the aftermath of her father's conviction, death in prison, her mother's remarriage and how she abandons her own daughter when she decides to start a new life in America. So contrarily to what I was expecting from Wilkie Collins, this novel is neither a crime story nor a thriller. It's in fact a victorian melodrama about marriage, temptation, infidelity and divorce. But I was not disappointed as to the quality of the writing and the flow of the story. The characters are well drawn and are truly 3 dimensional. What makes them so real is the fact that they all are simply human, no one being truly evil or entirely good. The best chararcter is the mother-in-law, Mrs Prestly, with her acid tongue and her feeling of always knowing better. The author depicts a difficult situation: Herbert Linley .mainly for compassionate reasons, brings home a young and beautiful governess (Sydney Westerfield) for his young daughter Kitty. As soon as this new arrival joins the Linley household, emotions run high. Sydney feels incredibly grateful to Mr. and Mrs. Linley for the opportunity they haven given her and she quickly develops a strong bond of affection with Kitty. The mother-in-law thinks that her daughter is taking a foolish risk by letting a young and beautiful woman live in her house and that she represents a threat to the Linley marriage. Mrs Linley is torn between the confidence she has in her husband and the frienship she feels for Sydney and the constant forebodings of her mother. I'll let you discover the rest. Wilkie Collins has a surprisingly modern view of the situation and looks at each character with compassion and without passing harsh judgments on their actions. The evil genius of the title is about discovering who is the person who truly contributes to destroy the Linley family. All in all, this story is a great treat.

But the narration is sadly lacking. The novel deserves so much better. i agree with other reviewers that the narrator has an incongruous American accent for most of the book. His interpretation of a Scottish accent is so outlandish, it's almost comical at times. And the womens' voices are quite atrocious - too high pitched and in a annoying falsetto. But in spite of the bad narration, I still enjoyed the book and would recommend it. Read it or wait for a better audio version. Simon Vance and Juliet Stevenson, just to name two examples, would do such a fantastic job at making this novel shine

This is a fun little story and would make a great movie: the characters are well developed, interesting and multi-faceted, the story has twists and turns and it all ends happily ever after. It’s funny too. Maybe I’ll try my hand at screenplay-writing…. “and the Oscar for best adaptation of a novel goes to….”

The insight into late 19th century life. I liked the reader least

Not good by 21st century mores.

Who would you have cast as narrator instead of John Bolen?

Almost anyone, but certainly British

Did The Evil Genius inspire you to do anything?

Be glad I live in the 21st century

I have made a note never to listen to anything read by John Bolen.

This book is read in an excellent campy style that perfectly fits the weird Victorian campiness of the tale. It's a good story and of historical interest in its treatment of divorce and custody issues.

I am a fan of Wilkie Collins and looked forward to this book. I'm afraid I found it dreadful and would not have given a star rating at all. It is not simply that the narrator is American but that he does not have the reading skills necessary to make the text 'live'. His attempts at an English accent - several different characters required - and female voices would be comic if they weren't so irritating. I've listened to Americans reading English novels before - including other Wilkie Collins' - and have not found that hindrance to enjoyment. This particular reading, however, is impossible to finish. Such a disappointment.

I love Wilkie Collins novels but this was good story totally ruined by the narration - Dreadful accents - laughable really - a total waste of time and money. A rare dislike of an Audible book.

I so agree with the other reviews. I love Wilkie Collins but this version was truly dire. The reader's American voice was bad enough when reading the narration but any attempt at characterisation or accents - male or female was grim.

why on earth is the narrator american? totally spoils a wonderful british novel!

Not Wilkie Collins' finest hour but of interest to anyone who likes literature from that era. However the narrator, John Bolen, is possibly the worst person I have ever heard reading a novel and this ruined the book for me. His pronunciation of many English place names was laughable and likewise the various accents he attempted. Also, his female and children's voices were simply weird and greatly distracted from the text. I definitely won't listen to any more books which he narrates.

This has got to be a joke! The narration is awfull

I am a huge fan of Wilkie Collins and have read several other works by him but this has to be a joke!!! The American accent could be excused if it was easy on the ear but this is awful. I have listened to 2 chapters and can go no farther. Have to get this off my iPod now!

The narrators voice and reading skills are very poor - like primary school level poor! His accent is very hard to listen too considering this is a Victorian English novel, set in England with English characters. His attempts at English characterisation are amateur to say the least and are actually turning this novel into a comedy.

What character would you cut from The Evil Genius?

The narrator - without a doubt!

This is the second Wilkie Collins novel that has been ruined for me by poor narration. Aramadale was the other, and I persevered with it blaming my iPod, but this is unreal!!!