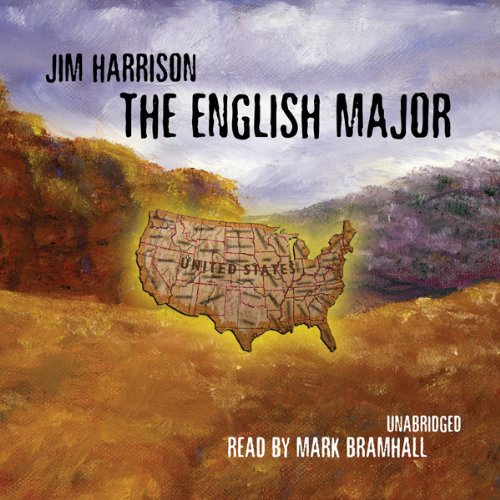 "It used to be Cliff and Vivian and now it isn't."

With these words, Jim Harrison begins a riotous, moving novel that sends a 60-something man on a quest of self-rediscovery.

Newly divorced and robbed of his farm by his real-estate shark of an ex-wife, Cliff is off on a road trip across America, on a mission to rename all the states and state birds and redeem them from the banal names men have given them.

Cliff's adventures take him through a whirlwind affair with a former student from his high-school teaching days 20-some years before, to a snake farm in Arizona owned by an old classmate, and into the high-octane existence of his son, a big-time movie producer. A map of a man's journey into - and out of - himself, The English Major is vintage Harrison: reflective, big-picture American, and replete with wicked wit.

©2008 Jim Harrison (P)2008 Blackstone Audio, Inc.
"Harrison is consistently witty and engaging as he drives home his timeless theme: that change can be beneficial at any point in life." ( Publishers Weekly)

A picaresque novel for baby boomers

Mark Bramhall sets just the right tone for the first person narration of Cliff, a former English major, high school teacher and farmer. 60-year-old Cliff is in the dumps because his wife has left him, his beloved dog has died, and his farm has been sold out from under him. So he takes off on a cross country road trip. This is a novel of ideas more than action, and the context of a road trip allows Cliff to muse on the nature of love and marriage, fidelity, loss, career choices, fishing, natural beauty and changes of fortune. The narrator captures the tension between the ennui Cliff feels at his losses, and the growing excitement of new landscapes and unplanned days. Harrison's prose is pleasantly conversational, yet elegant in its simplicity and lack of artifice.

I was laughing out loud at several parts in this story. Just the phrasing used by the main character to show his views on the world was sometimes hilarious, though dilivered quite dry. The narration seemed dead-on to me, meaning the voice and inflection seemed just right to me for an ex-farmer from Michigan... but then, who knows? just a perception. I just know he made me laugh.

On the down side, i felt that the character didn't really "get" anywhere. This is not the kind of book i often get (usually get detective stories), so not sure what i expected. Maybe that he'd grow a little more? I guess what i'm saying is that the ending left me disappointed, but in all, i enjoyed the trip.

I liked Harrison's writing style when I read "True North" and "The Summer He Didn't Die" and I found The English Major very amusing, in a dry, ironic way -- appealing to other men the age of the main character. I am not surprised that readers less than 50 years old find the character and the writing style abrasive or, maybe, offensive. I laughed out loud at many scenes and at the way the narrator expressed the words. I love the characters from the UPM (Upper Pennisula of Michigan). This is a great "On the Road" novel! Recently divorced but more sad about the death of his dog, cheated out of his share of the farm he ran, and on the road to see his gay son in California, the english major (BA in English) needs all his wit to survive.

I have never read or listened to any work by Jim Harrison before but this work is excellent. It is not only a road trip but a journey into what matters to the main character Cliff. An important point is that there is no psychobabble Cliff's view of his country the USA is wonderfully curmudgeonly, awake to the problems and possibilities. all the characters are wondefully off centre especially AD. The reader,s voice (Mark Bramhall)was very much in the tone of the text. Great audio.

Just get ready to laugh

I'm not sure if it was the writer's dry wit or the narrator excellence in delivering it, but this story just made me laugh. Its sad at points and your heart goes out for the main character at times, but his unique way at looking at life is refreshing and funny. I almost gave it 4 stars because the ending didn't quite live up to the rest of the book, but after thinking about the fact that I listened to it twice (something I rarely do) I went ahead and gave it 5 stars.

Curmudgeonly Tale of the Road

I enjoyed this book so much. I think the magic is the sum of the parts: the narration is spot-on; the story of the open road is descriptive and interesting without being laborious; the literary allusions of the title are non-pretentious and often heart-aching; and the main character: priceless. I almost didn't get this book because of the other reviews, but trust me, for those of a certain sensibility, this is a journey you will enjoy.

Fantastic listen. I truly did not want this book to end. I could have gone on endlessly stalking Cliff's adventures and train of thought. I love Harrison's witty writing style and the narration was so superb I felt like I personally knew the characters. He also added depth and humor to them by his spot-on inflections. I'm looking forward to more by this author teamed with this narrator.

Once again a story, a saga that once enlivened remains so and forever will. This is a journey of a soul seeking compassion and affirmation of the joyous authenticity of life.

An English teacher turned farmer ruminates on his life on his quest to visit each state. The reason for his journey unfolds as he thinks about his wife and son, the latter of whom he is on his way to visit.
Even though his life has just been turned upside down, Cliff is a thoughtful guy who blames no one but himself for his situation. He has reasons to wallow in self-pity, but he remains remarkably cool. However, very little changes from beginning to end, and even though he has great sex with a younger woman, he finds little joy except in fishing and renaming the states.
The book rates three stars for his lucid observations about life, but needs a little more oomph.

I suspect the author planned to offer some grand insights into life and change, but the insights aren't grand, the characters aren't really very likeable, and in the end, one is left wondering why it took so long to make the authors pretty inane point.

It's true the writing style is colorful, and it might have even worked as an essay or short story, but eventually one has to actually say something, not just put words on the page.

Wouldn't recommend at all.