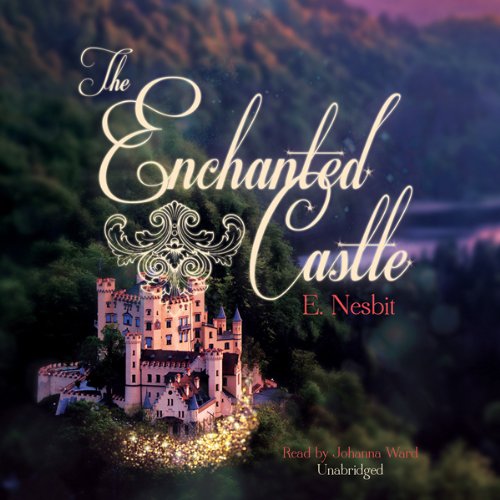 "I'm going to believe in magic as hard as I can," said Gerald firmly when they found the beautiful garden with its lake, its yew hedges, and its roses. After which it seemed only natural to find a princess lying asleep in this enchanted place, and for Jimmy to wake her with a kiss (Gerald having declined that honor with some disgust).

"I haven't had anything to eat for a hundred years," said the Princess, whose name was Mabel, and she invited them into her castle to share her repast, though strangely enough the only food she could offer was bread and cheese and water! Next she led them to her treasure chamber and showed them all her jewels, removing their last lingering doubts of the magic by putting on a ring of invisibility - and promptly disappearing!

What made the experience of listening to The Enchanted Castle the most enjoyable?

Just loved this book and the narration is wonderful. My 5 and 7 year old children enjoyed this book.

performance is exceptional! the characters come alive with Johanna ward's excellent narration. worth every penny

EE Nesbit's turn of the century novel revolves about 4 kids who have stumbled onto a powerful talisman. The ring is understood to grant wishes to the bearer. Hijinks surround all of the characters at one time or other and always add to entertainment value.
The four children and the French governess have their characters developed the most. Kind of reminded me of old Steven King's Stand By Me movie.

If you want a book to help you escape for a time, this is it.

What a great story and what creativity she had! We wonder if JRR Tolkien got some of his ideas about the ring from the story. The narrator did a fantastic job with all the different accents and voices!

The performance is amazing. I really like how detailed the story is. I give this story 15⭐️ this story is amazing and awesome and great and Breathtaking

struggled to finsh this one. normally I do my best to finsh a series or a single novel before casting a judgement. I just couldn't stay intrested in this one.

Great book, with not so great narration

I thought this book was rushed through by the narrator, and it stopped me from fully enjoying it. Wouldn't recommend the listen - buy the book instead.