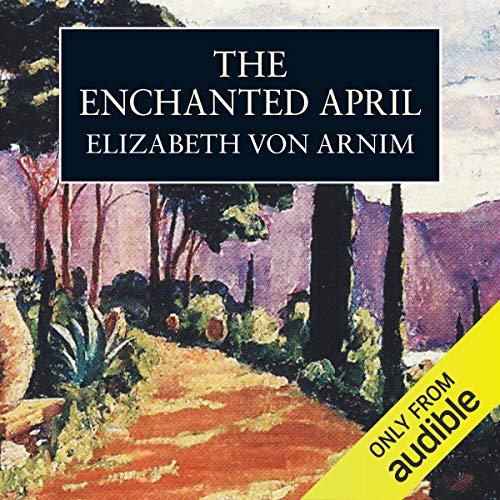 It began in a women's club in London on a February afternoon. A discreet advertisement in The Times, addressed to "Those who Appreciate Wistaria and Sunshine..." lures four very different women away from the dismal British weather to San Salvatore, a castle high above a bay on the sunny Italian Riviera. There, the Mediterranean spirit stirs the souls of Mrs Arbuthnot, Mrs Wilkins, Lady Caroline Dester, and Mrs Fisher, and remarkable changes occur.

Perfect antidote to the doldrums

Where does The Enchanted April rank among all the audiobooks you’ve listened to so far?

Chronic insomniacs, this is guaranteed to offer delight; top level

What was one of the most memorable moments of The Enchanted April?

The arrival in San Salvatore; the quadrille in the rose garden

Low, resonant voice; definition of all characters, mastery of dialects

If you could rename The Enchanted April, what would you call it?

The Awakening, or Examining Life through the Eyes of Love

Oh, Gosh! What a Delightful Surprise!

Would you listen to The Enchanted April again? Why?

I purchased this audiobook because it came cheap. I had low expectations. So imagine my surprise when I found fleshed-out characters, a not so easy journey for them, and twists in the plot. Even though I absolutely knew how it'd turn out in the end, it was so good (and so well narrated) I zipped through, chapter after chapter. And I look forward to doing that again someday because really: what a delight!

All the characters have complicated natures, complicated desires, and unexpected challenges to growth. Mrs. Wilkins, Lottie, however, is a natural favorite as she's the catalyst for change, the one who leaves her subservient self behind, and looks to the future with hope while enjoying every second of the present.

This book really makes you look at the beauty around you, and it inspires you to fling off your shackles with joy. I particularly was impressed by how many little obstacles were thrown in the way of the characters. What should have been a predictable journey to growth was instead written with challenges for them. This had me biting my nails now and again.

I found nothing wrong with Eleanor Bron's performance but was instead really quite taken with it. There are different versions of this book, but I suggest this version as Bron has a knack for delivering the different tones of the characters' natures, their emotions. She doesn't make the annoying mistake of trying to warp her voice into different characters but uses subtle variations to distinguish them. She really captures their longings, their fears, their hopes.

Make no mistake, this is light reading/listening. If you're looking for deep plot dynamics, save this for later. But by all means, come back later if you'd like some refreshment. It's a little gem that I had no idea was out there.

I love this book. I have been aquainted with this story for over thirty years. I have watched the movie. Read the book even watched a play, my favorite easy is audible and Eleanor Bron as the narrator. Ever year the characters unfold and they are richer more filled out and real. I will probably go on loving and revisiting this story for many more springs, being transported for a winter cure to Italy in April.

A perfect read for any season

If you've longed for an Italian holiday in a quiet old villa with charming friends, this is your ticket. It will be even better if you adore flowers and good, if short, conversations. A likening for the British will positively seal the deal. Can't get away right now? Read The Enchanted April.

This is a charming novel-- witty, thoroughly entertaining, with just enough depth and insight to make it memorable and touching. The dialogue sparkles, and every character has her "moment." Small wonder it's been adapted so many times for screen and stage. Eleanor Bron's performance is flawless. She delineates each character in a subtle and specific way and puts across both the inherent comedy and the characters' longings. It was a wonderful book to listen to while driving this summer.

Best Narrated version out there.

Best Narrated version out there. I could listen to this over and over. I imagine she read it just as the author intended.

I first found this book in Librivox free audio book app, then finally bought it. Great story, love each character. I've lost count of how many times I've re-listened to it.

A sweet gem of a book. Like a warm cup of tea on a cold morning, providing comfort to the soul. I am so thrilled I stumbled upon this treasure. Perfectly narrated, charming and uplifting.

Listening to this audiobook is like visiting a villa in Italy in April and experiencing the same magic that bewitched the women and their men friends. It was so perfect for a good moment in which I listened to it. The narration was a real treat.

This is a lovely and amusing book about the interactions of four different women, initially strangers, on holiday together in Italy. I thoroughly enjoyed the misconceptions of the women about each other and their growing together as friends.

This is a real feel-good story. Eleanor Bron is an excellent reader who brings out the full humour of the dialogue, as well as doing full justice to the descriptions of Italy. Hearing it read aloud, as opposed to reading it from the page, totally enhances this classic book, and I would thoroughly recommend it to anyone who wants a mental escape to a perfect destination.

Not as good as 'Love' by the same author


The 'Love' I am referring to is another lesser known book by Elizabeth von Arnim and which is to my mind a far more interesting story. The Enchanted April is a pleasant enough book and it does have some biting wit, but on the whole it is all rather safe and lovely, like a cosy but slightly stifling Sunday afternoon BBC drama. This follows the story of 4 gentile but rather different ladies taking a holiday in Italy together. As is predictable, their rather frosty exteriors begin to melt in the glorious Italian sunshine and the causes of their various miseries are magically resolved. I must admit I found the deference paid to the Lady Caroline character extremely irritating and made the whole thing seem very bourgeois and dated, but then I suppose that's what this book is, and I shouldn't be too surprised. Once again Eleanor Bron does an excellent job but without any really dramatic scenes I don't think she really had to try too hard with this one.

What did you like most about The Enchanted April?

Most interesting content: characters of different women of the time and insights into their lives. Beauty of Italy; different sorts of marriages.

Eleanor Bron reads superbly. She is one of my go to narrators.

Well worth a listen if you like character and relationship based fiction that doesn't move too fast.

A delightful read, describing times we have perhaps forgotten, when women were not free to make their own choices. Written nearly 100 years ago, this book will delight, appall and enrage you until the magic of Italy pulls you in and enchants you.

A Glimpse into a Bygone Age

What did you like most about The Enchanted April?

I loved the uniqueness of the characters and their interaction with each other; how they developed and matured during the story

The depiction of Italy, its gardens, its food, its people and the contrast between the stiff Anglo Saxons and the passionate and volatile Italians

What does Eleanor Bron bring to the story that you wouldn’t experience if you had only read the book?

She made the characters come alive - such a fabulous voice - so well-read.

Loved getting to know the four very different women as they go to got to know each other and how they bloomed one April. Very lovely escape from the day to day.

Well worth a listen.

A real feel good story, put it on when it was raining and miserable, and cheered me up no end.

I loved this book so much. I really felt I was there and Eleanor Bron was the perfect narrator.

Not much happens in the story but there are some good descriptions of the characters and their surroundings. Easy to listen to after a busy day!