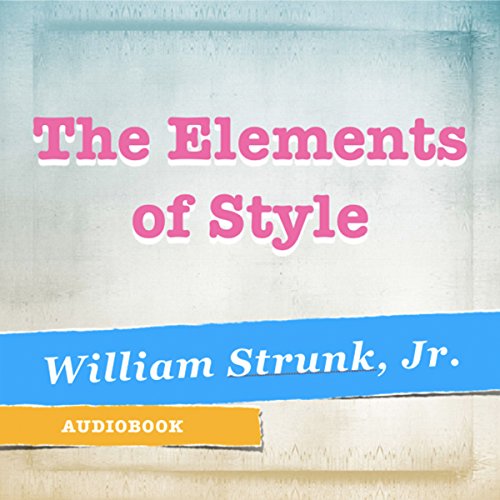 The Elements of Style

The Elements of Style by William Strunk, Jr. is an American English writing style guide. It is one of the best-known and most influential prescriptive treatments of English grammar and usage, and often is required reading in US high school and university composition classes. The original 1918 edition of The Elements of Style detailed eight elementary rules of usage, 10 elementary principles of composition, a few matters of form, and a list of commonly "misused" words and expressions. This book, printed as a private edition in 1918 for the use of his students, became a classic on the local campus, known as "the little book", and its successive editions have since sold over 10 million copies. This version is based on the public-domain text from 1918, which was originally uploaded to Wikibooks and wikified by Wikibooks: User: Lord Emsworth in 2003.

Poor reading of an excellent book

The Elements of Style remains an excellent guidebook and a reliable resource. However, this reading was marked by incorrect pronunciations and misplaced emphases. This is the worst Audible Book I have listened to.
This reading should be withdrawn and replaced by a reading worthy of the material.

Ok performance of a bad audiobook

This book is not suitable for the audio format; it is reference material with lot's of comparisons.
Not what I expected

The text is dry, but contains quite a few useful tips on punctuation and other grammar. BUT... even at this low price this audiobook is to be avoided. The pronunciation, emphasis and tone are non-native or at least not natural. And the editing... at some point the narrator stops mid-sentence to correct himself and a few seconds later again! I always finish audiobooks once I started, but this one I just couldn’t handle. Sorry, but this a very, very badly done.

Everyone who writes in English should be familiar with the 1959 version of this book, known as Strunk & White, that New Yorker writer E. B. White edited and expanded.

This is Strunk's 1918 version, now no longer under copyright.

The narrator takes a basic instruction text and butchers it. It is apparent within the first few minutes that he is an amateur completely unpracticed in reading text in a smooth and listenable manner and that he is unfamiliar with the correct pronunciation of "rhetoric" and other essential terms. The narration completely undermines the value and purpose of the text.

In fairness, it is probably better to read this book than to listen to it, given the nuances of punctuation and emphasis that are usually easier read than heard. However, I wouldn't know because I couldn't make it past about 10 minutes into this performance. To me a good performance blends seamlessly with the subject matter, but I found myself so distracted by the narrator's reading that I couldn't even take in what the author was trying to say. Avoid this one and read it instead.

An amazing version of a great book

I just love this book, and this version is just amazing. It’s the first audio version I listened to, and I enjoyed it very much!

This version, narrated by Matt Montanez, is read in an awful robotic style, as though the narrator is trying to imitate a speech bot. Many words are mis pronounced, the narrator seems to not understand the sense of the words he is reading. Do not use this version, it is impregnable.