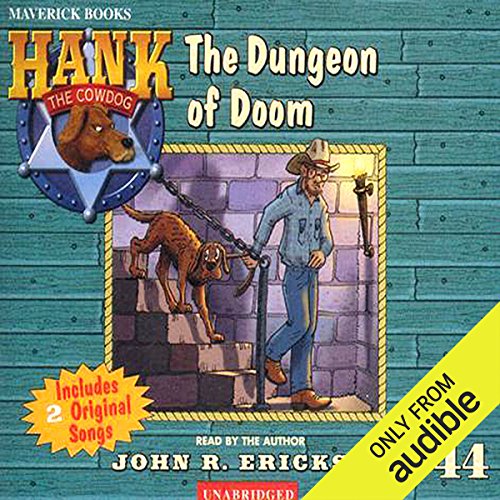 The Dungeon of Doom

Cruel and unusual punishment! As Head of Ranch Security, Hank knows that it's his job to clear the ranch of all intruders - and that includes gophers. But when Hank's efforts to rid the yard of one such critter causes a stampede in the middle of the cattle round-up, Loper decides that he just can't take it any more. He wants Hank to learn some manners, so he's sending him to - gulp! - obedience school.

To Hank, this sounds like torture, complete with dank dungeons, torches burning on the walls, and menacing instructors who wield etiquette like weapons. How will he ever survive?

Hank wonders "Where Were We?" and Slim sings "Hank's Going to School".

Hank the cowdog is one of my favorite book series ever. He has just the right qualities: weird humor, seriousness, and somehow is able to negotiate with Drover. I may only be 10, but I have been listening to this since I was SUPER little. This is my 3rd favorite book in the series, and that is saying a lot. If you want a couple of laughs, this is where to come.

Sucks to tell me about the week of the jk ujdjrhprjdhmeijl.ereqofnxndLjb. Us d d d dsjfnljjgdjjdjj

This is an awesome story written and narrated by John R. Erickson. Thank you Audible!!

Not the quality of earlier audible books purchased

The recording quality was very poor. As well, the character voices were not the same quality as earlier audible books purchased. Will not be listening to it again in the future. I would return the book for an earlier book, but do not seem to find that option.

The audio on this particular audio book sounded very echo-y, but otherwise the same great storytelling as always.

It is just so active and fun