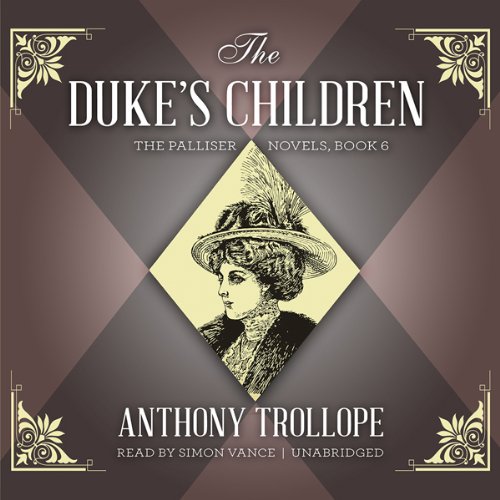 The brilliant conclusion to the Palliser novels, this touching story follows the elderly Duke of Omnium, the former prime minister of England, as he struggles to overcome his grief at the loss of his beloved wife, Lady Glencora. To complicate matters, he must also deal with the willfulness of his three adult children as he tries to guide and support them - his plans for them are quite different from their own.

While his two sons, sent down from university in disgrace, rack up gambling debts, the duke’s only daughter yearns to marry the poor son of a country squire. Though the duke’s noble plans for his children are ultimately thwarted, he comes to realize that parents can learn from their children as well.

This final Palliser novel is a tale of love, family relationships, loyalty, and principles, as well as a compelling exploration of wealth, pride, and the strength of love.

Anthony Trollope (1815–1882), the author of 47 novels, was one of the most prolific and respected English novelists of the Victorian era. He is best known for his series of books set in the English countryside as well as those set in the political life, works that show great psychological penetration.

Public Domain (P)2012 Blackstone Audio, Inc.
Classici Teatro e spettacoli Letteratura mondiale Europea
Mostra di più Mostra meno
" The Duke’s Children remains a comedy, beginning with a death and ending with marriages. For all its sobriety, it is among the most optimistic of Trollope’s novels. The Duke is thwarted, but he is also educated, and his story reflects Trollope’s faith that parents can and should learn from their inheritors." (Dinah Birch, professor of English literature, University of Liverpool)
"The only duke whom all of us know." ( Westminster Review)
"[This] dramatic essay, if we may so term it, upon the aristocratic principle, in its relation to politics, society, and morality, possesses an interest which few or none besides Mr. Trollope could have imparted to it." ( Spectator (London), 1880)

Simon Vance narrates the final novel in the Palliser series with his usual grace and precision. The story itself is not a complex one: two couples are in love but mismatched socially (a common Trollope device); obstacles arise and then by one means or another they fade away.

It's in Trollope's characters that the chief pleasure lies — that, and his insistence on addressing his readers directly, an entertaining approach that used to drive my old Victorian novel teacher batty. And it's in Trollope's characters that Vance's skill at narration manifests itself. I'm particularly fond of his characterization of Plantagenet Palliser, the Duke of the title; and of Isabel Boncassen, a young American woman who possesses great wealth and no social standing. Trollope'a women are often highly intelligent and are aware of the constraints they're forced to live under in a male-dominated society.

Trollope's world, stretching across dozens of novels, is not one where nothing bad ever happens. People die in all sorts of ways — apoplexy, alcoholism, suicide by poison, blowing one's brains out (the sight of which leaves another man broken for the rest of his days). Love is not always requited: people are sometimes forced to live out their lives in lonely solitude. People are disgraced, people lose all their money, people go mad.

But somehow the tone remains always genial, compassionate, and touched with humor. And Simon Vance'a narration is a perfect fit. This is a strong and satisfying conclusion to the Palliser series.

I will miss this series. it has kept me sane

In this horrible era I have been luxuriating in Trollope's humor and wisdom. His women are #metoo women: smart, majestic, courageous. His political world is lame, fruitless, diminished. It's familiar, but wrapped up in Victorian mores, so palatable.

Two stories of romance that truly satisfy the heart and challenge prejudices display Trollope’s great character development. Interpersonal family relationships are examined with a reality and tenderness that rings true.

The reader's American accent made me crazy

As with the other books of this series, the main characters' never ending angst does get a bit tiring not over all I enjoyed this greatly. EXCEPT for the reader's attempt at an American accent. That was pretty bad.