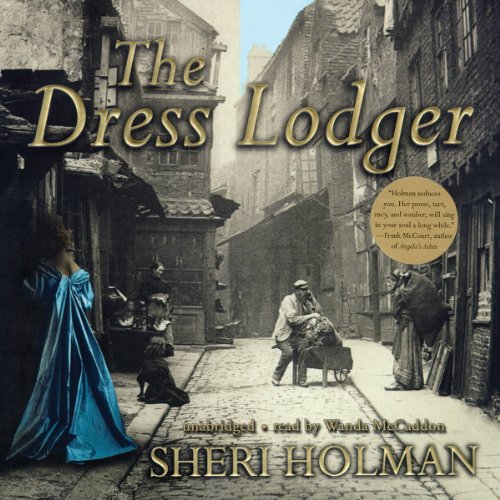 Fifteen-year-old Gustine is a "dress lodger", a young prostitute who rents a beautiful blue dress from her landlord to attract a higher class of clientele. To make sure she earns her fees and to keep her from running off with his fantastical gown, her pimp has set a malevolent old woman, known only as "the Eye", to follow her through the back alleys of Sunderland. By day a potter's assistant, by night a courtesan of the streets, Gustine works to support her fragile only child, born with a remarkable anatomical defect.

Surgeon Henry Chiver is a prisoner of his own past. Implicated in the Burke and Hare killings in Edinburgh, in which beggars were murdered so the corpses could be sold to medical schools, he has come to Sunderland to start a new life. He has a loving fiance, an influential uncle, and an anatomy school that is chronically short of teaching cadavers.

Doctor and dress lodger come together in the filthy, overgrown East End of Sunderland. Here, during the worst epidemic since the bubonic plague, Gustine secures bodies for the doctor's school, until Henry's greed and his growing obsession with her child challenge her loyalty to him. With cholera bearing down on the city, Gustine must turn to her mortal enemy, the Eye, in her battle for the life and afterlife of her child.

"Narrator Nadia May is at her best as she narrates this bizarre story with appropriate irony and even humor....A stunning experience." (AudioFile)
"With remarkable breadth and depth, the narrative vividly portrays the human suffering spawned by the early Industrial Revolution....This dazzlingly researched epic is an uncommon read." (Publishers Weekly)
"Holman's vivid writing, rife with historical social commentary, renders Sunderland's residents and their sometimes macabre interactions disturbingly real." (Booklist)

The book started out pretty awful. I almost stopped listening, but I wasn't home to erase it and start a new book, so I kept listening. I am mostly glad that I kept listening, though I can't say that this is a "good" story. I only gave it three stars because I didn't DISlike it, either. I couldn't find it in myself to like any of the characters, nor did I find myself feeling sorry for Gustine, though I felt that maybe I should. I don't feel that this was a well-written book. The characters I felt a good book should make you like or at least feel some connection or sympathy for: Pink, Gustine, Baby, Henry, Audrey, and The Eye. I really disliked Henry and Pink, the end was too predictable for Baby and not enough was told about him for me to feel anything at all for him, and Audrey and Gustine were too... something. Shallow, maybe? I felt that by the time the story of The Eye was revealed it was too late to redeem her character. Despite my dislike or antipathy for the characters, the story was interesting enough to keep me involved to the end and the plot was an interesting enough idea.

I thought the narration was excellent.

At the beginning, this book was not very easy to stay with, but I’m glad I did. It is not a nice story, It’s not a “they lived happily ever after” story. It is dark and bleak but I understood that from the beginning. The details are not pretty, and many times the descriptions were more than I wanted to hear, but I was drawn into the sights, sounds and smells of the streets by the authors words. I was taken back to a different time. I was hooked.

I empathized with the character of Gustine and her baby, and hoped for a better life for them, even though I knew it was not to be.

The end of the book disappointed me, not because of what happened to the characters, but because I don’t think the end of the book was well written. It seemed like the author “ran out of steam”. After all the extensive graphic detail that was put into the rest of the book, the end seemed to be rushed.

This is not what it seems

If you like stories about rats, cholera and bodysnatching in the 19th century this is for you. Otherwise, it would be a good idea to choose something else.

Would you ever listen to anything by Sheri Holman again?

If you could play editor, what scene or scenes would you have cut from The Dress Lodger?

It is a dreadful book, I wouldn't have published it at all.

This book was not what I expected after reading the reviews and publishers summary, but in the end I found I was caught up in the story as it played out. Discovering different layers of the characters and feeling sympathy for even the most unlikable of them. The description of the world in that era is not candy coated and very unpleasant at times. However; it is that description that adds to the story and makes the listener believe the actions of the characters as they go about their daily struggle to survive in a very cruel world. The reader did a wonderful job and characters were recognizable as they interacted with one another. This is a audible book I will recommend to other and have already started listening to it again to pick up details I may have missed. If you are looking for a light read with a fairy tail ending, this is not it. If you are; nevertheless, looking for an audible book that will get you thinking of this world we live in, how individuals interact with one another, and how we take for granted the comforts of our modern society this is the book for you.

Not what I was looking for

I don't like the format of this read. I did not like this book. Author should take a lesson from Ken Follet who can weave history with fascinating fiction. Not happy.

Evocative, cleverly written, wonderfully enjoyable and sometimes too much to take. Nevertheless I would not have missed the chance to listen to it. I recommend it wholeheartedly!

Dickensian in style. About the cholera epidemic UK

The chilling similarities between public fear and disinformation regarding cholera, and the current pandemic, made this a different read than when I first read this 15 years ago or so.

The complicity of the plot is actually made simple by the directness of the style.

I found this novel quite enjoyable from beginning to end. The audible version has a fantastic narrator who brings the story even more to life.

I read this book ,and now I've listened to it and it was so amazing to hear ,the the Narrator is brilliant and totally brought the book to life , genius.One of my absolute favorites !

Sorry, a disappointing novel for me...


The book begins promisingly, cleverly engaging the listener as the characters as introduced, but, as we get to know them, these individuals become increasingly wooden and predictable.

(I confess, however, that I abandoned the book during Chapter 10, so I'm only commenting on Part 1 and just-into Part 2 of this audiobook!)

The story is set in the early 1830s, but the language can't seem to make it's mind up where it belongs in historical terms, fluctuating between an attempt at low-life Georgian vernacular and modern-day slang...

And, although we find ourselves in Sunderland, the vocabulary is irritatingly all-American: "blocks" on the street, "diapers" instead of nappies, "pants" instead of trousers etc. (I can't quite understand how such "mistakes" survive the editing process..?)

The narrator, Nadia May, is clearly a capable actor, but she seems to have trouble deciding whether the heroine, Gustine, is an experienced "woman of the world" whose voice is dark and full of contempt and suspicion, or an innocent young teenager who trills and giggles... I didn't like these inconsistencies.

As the novel opens, Ms Holman acknowledges a plethora of advisers and historical sources. Sadly, I fear that she was shockingly ill-advised on a number of issues since there are so many historical detours in the narrative, not to mention blatant historical errors! This might not detract from the fictional story for many readers, but, for me, this author simply isn't able to revisit and re-enliven history as can Peter Ackroyd...

If you want to read Ms Holman on her "home territory", try "Witches on the Road Tonight" instead. There may, of course, be historical inaccuracies in that book too, but it's a compelling story based in a contemporary US, with flashbacks to a magical, pre-war, rural America. It was certainly a better listen than "The Dress Lodger"!