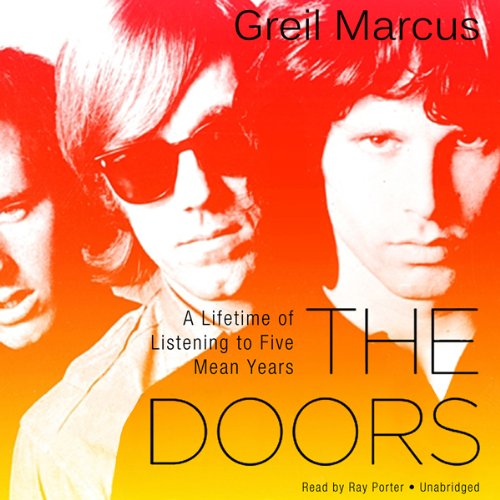 The best critic of popular culture in America considers the attraction of the Doors, which has endured despite the band’s short life, sampling the lasting songs and legendary performances that made Jim Morrison and his band rock ’n’ roll legends.

A fan from the moment the Doors’ first album took over KMPX, the revolutionary FM rock ’n’ roll station in San Francisco, Greil Marcus saw the band many times at the legendary Fillmore Auditorium and the Avalon Ballroom in 1967. Five years later it was all over. Forty years after singer Jim Morrison was found dead in Paris and the group disbanded, one could drive from here to there, changing from one FM pop station to another, and be all but guaranteed to hear two, three, four of the Doors’ songs in an hour - every hour. Whatever the demands in the music, they remained unsatisfied, in the largest sense unfinished, and absolutely alive. There have been many books on the Doors. This is the first to bypass their myth, their mystique, and the death cult of both Jim Morrison - and the era he was made to personify - and focus solely on the music. All these years later, it is a new story.

Griel Marcus is the author of Bob Dylan by Greil Marcus, When That Rough God Goes Riding, The Shape of Things to Come, Mystery Train, Dead Elvis, In the Fascist Bathroom, Double Trouble, Like a Rolling Stone, and The Old, Weird America. With Werner Sollors he is the editor of A New Literary History of America. Since 2000 he has taught at Princeton and Berkeley, in Minnesota, and at the New School in New York. His column Real Life Rock Top 10 appears regularly in the Believer. He has lectured at University of California, Berkeley, the Whitney Museum of Art, and Princeton University. He lives in Berkeley.

“Nobody reads a song like Greil Marcus, whose prose is as passionate and omnivorous as the music he loves. Here he travels by way of Thomas Pynchon, pop art, and Charles Manson to bring the chaotic, majestic, death-haunted Doors back to doomed and haunting life.” (Salman Rushdie)

this read was a real bummer, and it's just full of negativity. It was obvious to me that the author is not a doors fan!

The worst book ever written

If you buy this book hoping to learn anything about the doors then don't bother. There is no factual information about the doors, no real research whatsoever. A total waste of time I'm afraid.

What was most disappointing about Greil Marcus’s story?

This book is the self indulgent ramblings of the author with no clear or relevant information to impart to the listener.