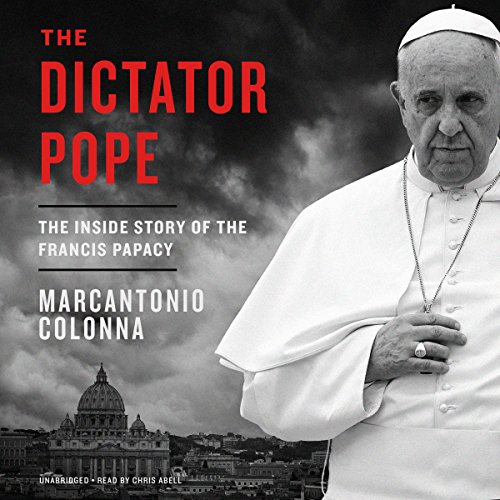 The Dictator Pope: The Inside Story of the Francis Papacy

Marcantonio Colonna's The Dictator Pope has rocked Rome and the entire Catholic Church with its portrait of an authoritarian, manipulative, and politically partisan pontiff.

Occupying a privileged perch in Rome during the tumultuous first years of Francis' pontificate, Colonna was privy to the shock, dismay, and even panic that the reckless new pope engendered in the Church's most loyal and judicious leaders.

The Dictator Pope discloses that Father Mario Bergoglio (the future Pope Francis) was so unsuited for ecclesiastical leadership that the head of his own Jesuit order tried to prevent his appointment as a bishop in Argentina. Behind the benign smile of the "People's Pope" Colonna reveals a ruthless autocrat aggressively asserting the powers of the papacy in pursuit of a radical agenda.

Cosa pensano gli ascoltatori di The Dictator Pope: The Inside Story of the Francis Papacy

At first I was worried that this would be scandalous or sensational, but it was not. I am a Catholic and found it to be insightful and a perspective I am not able to get otherwise. It does not surprise me that the position of pope is one that is steeped in politics. The writing is clear and concise, as is the narration.

Sad, but it makes the pieces fit together

The premise of this book --- that Pope Francis is, behind the scenes, a petty, South American-style dictator --- seems implausible, maybe even ridiculous, at first blush. Pope Francis? The jolly, smiling, waving, baby-kissing, poor-loving, man-of-the-people, media darling? It can't be! And yet, the evidence it presents, from inside the Vatican, is overwhelming. So many observers of this pontificate (several with impeccable credentials, even "insider" Catholic ones) have tried to stitch together a grand "theme" that animates it, or him, so they can then critique it, and him, as such. Sadly, there really isn't any such grand "theme." The only coherent, internally consistent "theme" to it is plain political pursuit, and retention, of power (and by "political" there, I mean primarily of the personal sort, the temptation to which is ever-present in the Church hierarchy, but also of the mundane governmental sort as well).

As an audiobook, it is excellent, and highly recommend for those interested. As a commentary on the state of the modern Catholic Church? Depressing. But for me, it at least "solves" the puzzle that the Francis pontificate has been.

This book is extremely well written, well presented, and I will listen to it again as it is written with no extra words and contains an incredible amount of information.

The Demonic Pope might have been a more suitable title

This is not a balanced analysis of Pope Francis’ pontificate but a one-sided diatribe. In the saga, everyone who supports the Pope is corrupt and duplicitous, whereas everyone on the other side of the fence is well-meaning and honest. There are very few instances of hard evidence in his accusations, most of which appear in the form of hearsay, it is thought, rumours, etc. Worst of all, little effort is put on explaining the ‘evil’ motivation for their actions as expressed by their would be perpetrators themselves. The final picture is black and white, and I’m old enough to know that such simplicity rarely occurs in the workings of the church. The author, obviously a conservative traditionalist, detests Francis. His narrative is thus imbued with this hatred from beginning to end. Whereas he constantly makes reference to core Catholic values (such as the sacredness of marriage, the perversion of homosexuality or the tabu on contraception), he himself majes little use of a much higher virtue: compassion.

"free-plate" instead of the standard American "yell-it" and it set my teeth on edge each time so I bailed about 40 minutes in. It's just me, I know. :( I'll return this and read a hard copy instead.

Sad Day for the Catholic Church

Through trickery and plotting, Jorge Mario Bergoglio became Pope Francis. This was not divine intervention, but rather human. This pope will cause the church to split again, and I think this is where we're heading. Please resign, Pope Francis. You are not an example of a good Catholic, let alone a good person. I could do a better job and I have zero experience.

In a book about Roman Catholic hierarchy, correct pronunciation of the word “prelate” would seem required. Sadly, it is mispronounced throughout.

I think that the book has great information. I believe that the interpretation that Francis is the master pulling the strings is inconsistent with the skill-set Francis has demonstrated. It is Pietro Parolin, who is more likely to be playing things, he is far more cunning. I also don't buy the Hillary Clinton election thing - a 1.2 billion campaign didn't need the help of the the Vatican. I wonder if the information was actually planted by someone trying to tie Francis-skepticism to right-wing American politics. you can't trust all informants. Of course, I have the benefit of more events than the author had at the time, but Parolin's supremacy is demonstrated in how, he, and not Angelo Becciu survived the past year.

A must-read for any serious Catholic. Can not recommend it enough. Cut through the spin and find the truth with Dictator Pope!

This book is mainly angry at the liberal/progressive shift, and in particular gays and abortion.

This book is masquerading as a scholarly text, when in fact it is an ugly and relentless attack on Pope Francis. Author Marcantonio Colonna (Henry Sire) is an opponent of Vatican II, ordinary mass and a supporter of the most extreme reactionary wings of the a Catholic Church.

Well researched and supported exposé of the Pope's background and how it is influencing his papacy.

Well worth the read/listen

Explains a lot on what makes Pope Francis tick.
The narration was very good.

What’s to say apart from just plain corrupt. The quicker this one goes the better. Should have been sacked a long time ago.

As a catholic born and raised, I have looked upon Pope Francis appointment with doubt, scepticism and ultimately dissapointment. A political appointee who is seemingly out of his dept and also corrupt. The author makes use of facts and insider information to point out the many flaws of this papacy and further more, the downward spiral which continues under Francis.