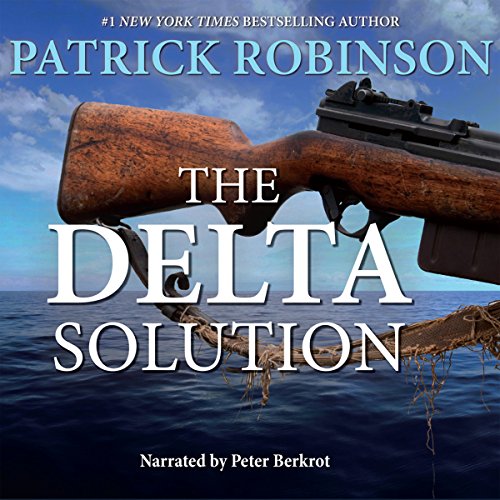 The Delta Solution is an action-packed novel pitting Navy SEAL Mack Bedford (from Diamondhead and Intercept) against the Somali pirates operating off the southerly reaches of the lawless East African republic on the Indian Ocean. For the past three years, these heavily armed tribal brigands have been capturing and holding for ransom massive cargo ships, and violently demanding millions of dollars for their return. When the "Somali Marines" make a big mistake, seizing at gunpoint two United States ships and demanding a $15 million ransom for their return, hero Mack Bedford is deployed to obliterate them in the middle of the Indian Ocean, at all costs, once and for all.

Patrick Robinson loves the US Navy seals. I don’t remember one of his books where they are not in some way the star of the novel. In Delta Solution, pirates from Somalia are nabbing boats like fishing in a stocked pond – catch, ransom and release. The US Navy is impotent to do anything about until the Delta Solution headed by Mack Bedford rolls onto the scene.

The narration is done by Peter Berkot who does an acceptably average job on with inflections and accepts. Here is the rub with this book, it’s at least two ship seizures too long and drags in the middle causing the “enough already” response. At one point, I wound up listening at 2X speed just to get the story moving. I am a strong Robinson fan but he has lost his voice since the Arnold Morgan series which ended badly – the terrorists ultimately getting what they wanted there too. I am going to the read the fourth book, but if he doesn’t turn the corner, I think it's the end of the line for Patrick Robinson.

I will never get that time back again

I would hazard that Mr. Robinson has some ghost writers. If this was the first of his books I ever read, I would never listen to another one. However his early stuff is brilliant. This was US ra ra rubbish. Mack Bedford and his bullet proof SEAL's are over blown to the max, I mean really give me a break. Since when do Muslim pirates eat ham sandwiches. As far as Peter Berkrot's reading went it was over played and really annoying. Somebody should edit these narrators and give them the proper pronunciation of some fairly basic seagoing terms like how to pronounce bow as in bow of a ship not a bow and arrow you putz. don't waste your money on this one.

I agree with other reviewers in their disappointment with this book. I have read just about every seal book available and am usually riveted. The author seemed to need to tell me how impressed I should be, again and again. There was very little story or action. Lots of unnecessary verbiage and honking of seal horns. Our special forces are so exceptional that you don't need to tell me how exceptional they are. Just tell the story, the awe is in understating their feats. Thanks to our military at every level. You can all spend your credit on most anything, it would be better than this thing. 3 stars because of the tiny insight into piracy.

This book is more or less just propaganda.

What would have made The Delta Solution better?

It seems to me be a book just praising the US armed forces and especially SEAL's.
I got the impression after a few minutes that the book was produced as propaganda for the US, and scrapped it.

What could Patrick Robinson have done to make this a more enjoyable book for you?

Not write it at all.

Which character – as performed by Peter Berkrot – was your favorite?

I only listened a few minutes before giving up.

If you could play editor, what scene or scenes would you have cut from The Delta Solution?

At least the first chapter

Great Patrick Robison story as usual but the audiobook would be dramatically improved if read by George Guidall!

This book reads like it was written by a 12-year-old boy who has stayed late too many nights watching old Charlie Sheen movies on Cinemax and reading Dick Marcinko books. I'm not too proud to read unsophisticated adventure excitement stories, but this one was below average for even that genre.

Several scenes were essentially duplicated to the point where the dialogue seemed to come from a computer. The descriptions of interactions between military people were as inaccurate as the descriptions of weapons, which were comically exaggerated. Character development was entirely left out, so at least I didn't care too much which ones lived or died.

Redeeming qualities are pretty much limited to a lack of gratuitous violence and gore descriptions and/or non-sequitur sex scenes.

It's a little more Merica than necessary but what would you expect from a Navy Seal book? Good story though!

another great Patrick Robinson seal story. It will get you from the start and won't let go to the finish.

What made the experience of listening to The Delta Solution the most enjoyable?

This book is excellent. The author really gets into the minds of pirates, their sponsors and their villages. Gives a great understanding of what might motivate these thieves on the high seas. Also, the activities on two continents merge nicely.

I couldn't put this book down. I knew from the beginning how it would end at a high level (common with most books), but this one unfolded differently from what I had imagined. This book kept me up @ night listening and accompanied me on several long walks as it kept my attention. Not once did I think that the author was filling a word quota or writing just to amuse himself. Every description and every incident fed into the plot.

Extremely boring, expected a book about Navy Seals to be action packed, from beginning to end. No such luck, took me at least 6 weeks to finish the book. Just didn't want to pick it up & be bored to death.

But in the past I have overlooked his faults in the cause of a good plot and a decent tale and I have either listened or read them all.

However this latest shabby offering is so cheesy all that is required to make it complete is a glass of port and some biscuits. The books failings are made even worse by the “American blockbuster” style delivery by the narrator.

Towards the end of the story it was so appalling I just got angry It gives a wholly inaccurate portrayal of the manner in which what we are supposed to believe are professional special forces people senior admirals and a retired admiral conduct themselves, the language they are likely to use and the manner in which they use it! Is a complete joke.

This is quite simply the single worst audio book I have ever listened to and the last Patrick Robinson I shall waste any of my money or credits upon.

Not a bad story but could of been so much better with a good narrator. The accents were pretty bad and didn’t seem to change much. Bit like a Hollywood blockbuster acted by over eager Unknown’s. Sorry.

I have read Patrick Robinson books from the start and enjoyed them all ,but I think he must had an off-day when he wrote this . I have listened to nearly half of this and just got so fed up with it I would welcome being boarding with pirates. I have consigned this to the big mistake bin .