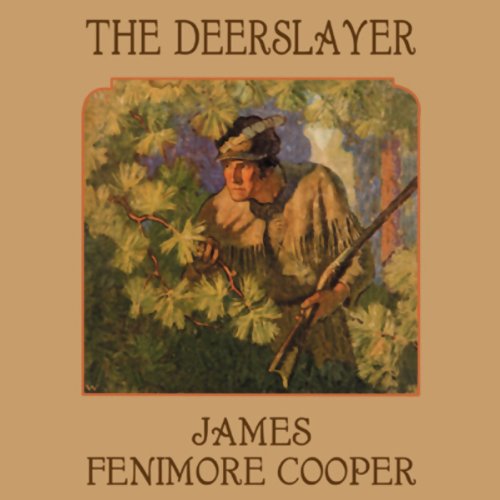 The Deerslayer is the first of the Leatherstocking Tales of James Fenimore Cooper. Here we meet Natty Bumppo as a young man living in upstate New York in the early 1740s. The action begins as Bumppo, called "Deerslayer", and his friend Hurry Harry approach Lake Glimmerglass, or Oswego, where the trapper Thomas Hutter lives with his daughters, the beautiful Judith and the feeble-minded Hetty. Hutter's floating log fort is attacked by Iroquois Indians, and the two frontiersmen join in the fight.
(P)2001 Blackstone Audiobooks

Not for the faint of heart (or vocabulary), but rewarding

The Deerslayer is an excellent adventure story, wrapped in a somewhat daunting package.

Cooper, like many authors of his time, is a fan of purple prose. He will never use a simple sentence when he can use a compound of three or more parts, and he'll use "retiring luminary" in place of "setting sun" nine times out of ten. However, if you can get past the first chapter or so of description, you're through the worst. Cooper likes to set the scene at the beginning, so he doesn't have to pause in the action later on.

Think of this like a medieval romance, with knights in leather stockings, rather than steel plate. Everyone talks in a high-faulting, verbose way that calls to mind ballads more than natural speech, and the characters are embodiments of nobility or vice... Though what is considered "noble" varies between cultures, and Cooper was one of the first to acknowledge this.

As for the reader, his voice is clear and pleasant, even if he occasionally puts the emphasis on the wrong word in a sentence, like someone who doesn't have a complete grasp of the vocabulary. He does a (mostly) good job of differentiating between the characters vocally, and he renders the dialects and native names quite well.

All in all, it's tough, but worth it, like so many things in life.

things were slower them

The pacing on this will make you anxious if you are used to fast paced run and shoot stories. The recording is not bad, and the reader does a good job on his characterizations. However, things were slower back then, a lot slower, a lot slower. Nattie's ruminations on his na'ter and his preachification on just about everything gets you to the point where you may skip a few tracks. But all in all, it is a pretty rousing story, very good scenic imagery and background. I hit a deer while listening to this book in my car so......

These titles all take a measure of dedication to get through but the effort is worth it. I have a regret not reading this years ago in my youth while I was a student at SUNY Delhi and Oneonta in Delaware and Otsego counties respectively. Having said that this audio version may have been easier as the syntax and dialect of the day would have been difficult even for this child of the 1970's.

It may take you an hour or two to tune your ear to the cadence of the text but the narrator does an excellent job in presenting different voices and tones of emotion to help the listener differentiate time and place. Though LotM gets all the press this fine tale should not be overlooked for both historic and academic reasons.

If you miss something don't be afraid of employing your back button which will help to maximize your experience.

30 years in the making

I started reading this book back in April of 1990 while I was on the deployment with the U.S. Navy on the USS Eisenhower. Life got in the way and I picked it up and put it down a few times over the years. It wasn’t until about a month ago that I picked it back up, only this time through Audible to finally get it read. It was a long journey but in the end it was worth waiting for. So glad I finally finished reading this book. Now off to the next adventure hopefully not another 30 years in the making!

If you could sum up The Deerslayer in three words, what would they be?

What other book might you compare The Deerslayer to and why?

Last of the Mohicans

Have you listened to any of Raymond Todd’s other performances before? How does this one compare?

Have and he was good

The first of the Leatherstocking tales, it captures the attention and imagination. Although the reader has a god voice, he seemed not to understand what he was reading many times and so puts the emphasis on the wrong words. This makes understanding and following the story difficult sometimes. The language is often archaic and even anachronistic; sometimes it seemed like bigger words were used when shorter ones would have done at least as well.
But in all, I thought it well worthwhile and it had many exciting episodes.

Cooper didn't mean to write a funny book, but he succeeded in the task nonetheless. If you should read it and not catch the humor, I suggest you read Mark Twain's short work on "The Literary Offenses of James Fennimore Cooper".

If you like adventure, history and the English language you cannot help but enjoy this story. Cooper wrote this in the late 1840's, and as anyone can tell you the English language was quiet different, something I greatly enjoyed. This gives a correctness to his story that cannot be obtained by an modern author. As in his other works he had extensive knowledge of the area he was writing about, and the American tribes that inhabited those regions. As such he was able to paint a picture that was easy to see.

This is a slow book to start, but well worth reading if you enjoy adventure stories from the early years of the American Continent.

a book well worth listening to.

I really enjoyed this book, and the reader was easily understood. it was a book worth pondering.

Although I thought the narrator brought The Deerslayer to life, I felt the story dragged on way too long. Parts were awesome but 20 hours was way too long to listen through this whole story when 7 to 10 would have been much better. Nothing can be done about the story since it was the original but I wish I would have looked for the condensed version.