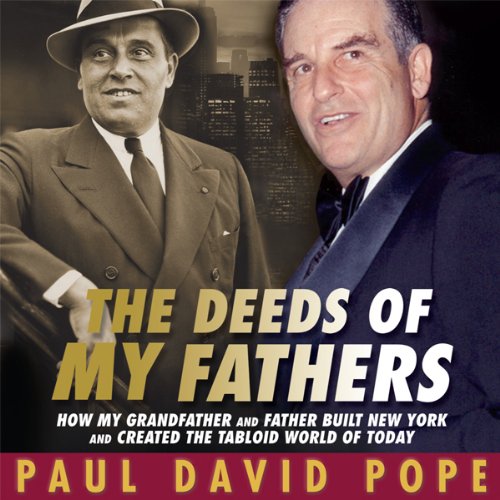 The Deeds of My Fathers

A story that reads like The Godfather has been crossed with Citizen Kane. The Deeds of My Fathers is the riveting true story of two men, a father and a son, who each started with nothing and built an empire.

Generoso Pope, Sr., an Italian immigrant, arrived in New York in 1906 with only pennies in his pocket. He got a job shoveling sand, but through his intelligence, natural leadership, ruthlessness, and ability to woo powerful politicians such as Jimmy Walker and Franklin Roosevelt, he worked his way up to become the biggest provider of cement, just as it was becoming the key building material for New York, vital to landmarks such as Rockefeller Center and Radio City Music Hall.

Gene Pope, Jr. was his father’s choice to inherit and run the business, but Gene’s mother and two brothers forced him out, and he found himself penniless and on his own. With a loan from his godfather, mobster Frank Costello, Gene bought the New York Enquirer. He renamed it the National Enquirer and focused on the paranormal, celebrities, and the hopes and fears of Americans. Gene forced the tabloid into the supermarkets and became a powerful media force, peaking with the seven million copies sold of the blockbuster exposé on the death of Elvis.

Paul David Pope, businessman, philanthropist, and now author, is a third-generation Italian American who launched an investigation into the controversial lives of his father and grandfather almost ten years ago. His team of reporters and researchers generated more than 50,000 pages of material, conducted 450 interviews, amassed thousands of photographs, and scoured presidential papers as well as FBI and CIA files.

“A richly detailed tale…Readable and revealing, and the vividly re-created scenes cry out for film treatment.” ( Kirkus Reviews)
“A true story that keeps you glued to the pages.” (Dominick Dunne, author of Too Much Money)
“The Deeds of My Fathers has it all.” (Peter Quinn, author of The Man Who Never Returned)

Cosa pensano gli ascoltatori di The Deeds of My Fathers

Great book great narration. I can't wait for this book to turned into a movie or a HBO series.