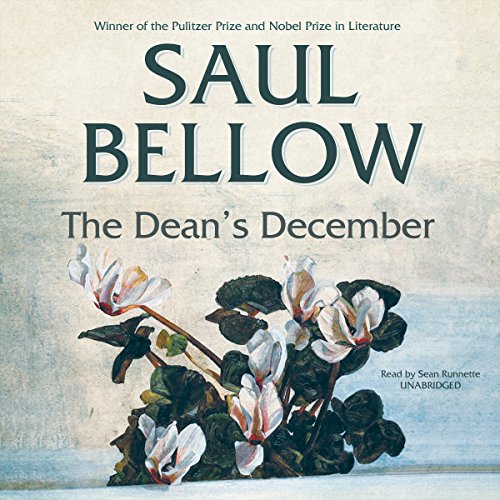 Albert Corde is a professor of journalism and dean of students at a Chicago university. He and his wife, Minna, travel to Bucharest, Romania, where Minna's mother has suffered a stroke and is lying semiconscious in the local state hospital. As Corde tries to adapt to life in his mother-in-law's small apartment and cope with her relations and friends, news filters through to him of problems he left behind in Chicago: one of his students has been murdered, and a series of articles he is writing offends powerful and influential Chicagoans he had thought of as friends. Gradually it becomes clear that Corde's trip abroad is more than a brief interlude in a calm and orderly life, and that nothing will ever be the same again. Witty and erudite, The Dean's December will be a delight to fans of Saul Bellow.

Great Story, The Narrator Does a Fine Job

Another great story by Mr. Bellows. I’m always fascinated by writers who take a simple situation and creatively reveal the many ways we humans complicate matters. I appreciate his character development and sense of humor.
The narrator did a fine job, a review said he wasn’t annunciating the last syllable of every word. I had no trouble hearing every syllable. If I knew that reviewer personally I’d tell him that’s a first sign of hearing loss. I work in the health industry and come across this in my work. Nevertheless I like that the narrator sounds the way I imagine the main character would.

What did you love best about The Dean's December?

Perfect combination of story and narrator.

What other book might you compare The Dean's December to and why?

The Dean's December is similar to Bellow's More Die of Heartbreak and Ravelstein -- late bellow seems overlooked compared to his "big" novels. If you like Richard Ford and Walker Percy, you'll like the Dean's December.

The narrator captured Bellow's meditative style; the book is read nice and slow and Mr Runnette has a rich deep voice. Bellow can pack more thoughts, ideas, and descriptions in one page than just about any writer. No wonder Bellow's new book is titled "There Is Simply Too Much To Think About."

I would have loved too if I could!

Slow, but enjoyable (once)

Slow, but enjoyable (once)

This is not my favorite of Bellow. The writing is, as always, very good, but the story is quite slow and characters just plod along. There is little action. It is like a sequence of fuzzy reflections upon modern life from various perspectives without explicit analysis.

For me this was a bit like watching the paint dry on a beautiful landscape. The writing is beautiful, and there is much to notice and think about, and there is plenty of time to consider the details. Nevertheless, it is a slow processes. I may have chuckled a few times, but was never otherwise emotional, thoughtful, but not emotional. Overall I did enjoy the experience, but I am unlikely to read this novel again.

I found the narration very well reflected the author's intent.

Another novel ruined by a poor narration.

The writing style of Saul Bellow is excellent. The story moved sloooowly. But the worst part was the narration style of S. Runnette. The guy either is trying to hide a speech impediment or learned a narration style where you reduce volume on the last syllable of words - like trying to avoid "popping your P's". But Runnette does it on just about every word.So you often don't hear the last syllable of the word he's saying. It's really annoying. I sometimes had to go back 30 secs in the recording to understand what he was saying.

Would you be willing to try another book from Saul Bellow? Why or why not?

But the worst part was the narration style of S. Runnette. The guy either has a speech impediment or learned a narration style where you reduce volume on the last syllable of words - like trying to avoid "popping your P's". But Runnette does it on just about every word.So you often don't hear the last syllable of the word he's saying. It's really annoying. I sometimes had to go back 30 secs in the recording to understand what he was saying.

Was The Dean's December worth the listening time?

Several Saul Bellow books have wound up in my "Recommended List" based on my other selections - so I'll give another book a try.