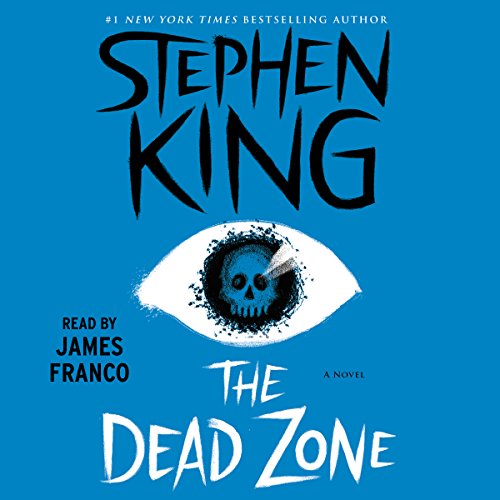 Never before on audio! A number-one national best seller about a man who wakes up from a five-year coma able to see people's futures and the terrible fate awaiting mankind in The Dead Zone - a "compulsive page-turner" (The Atlanta Journal-Constitution).

Johnny Smith awakens from a five-year coma after his car accident and discovers that he can see people's futures and pasts when he touches them. Many consider his talent a gift; Johnny feels cursed. His fiancée married another man during his coma, and people clamor for him to solve their problems.

When Johnny has a disturbing vision after he shakes the hand of an ambitious and amoral politician, he must decide if he should take drastic action to change the future. The Dead Zone is a "faultlessly paced...continuously engrossing" (Los Angeles Times) novel of second sight.

©1979 Stephen King (P)2016 Simon & Schuster
Suspense Supernatural Horror Ispirato a film, TV e videogiochi
Mostra di più Mostra meno
"Originally published in 1979, this title is finally available for the first time as an audiobook, with actor James Franco narrating... Franco's impressive acting talent is on full display. As the troubled Johnny, he narrates with restraint and melancholy. As Stillson - an amoral businessman who cons his way towards the presidency - Franco oozes menace." ( AudioFile)

Through the years I have read everything by Stephen King and now I am re-reading everything, but audibly. The Dead Zone was almost totally forgotten (since I'd read it so long ago) until I listened to it. Couldn't stop listening! King has the ability to make the characters into my dear friends, or just people I know. Incredible ability.

My favorite audible book EVER has always been Frank Muller's reading of The Green Mile, but the Dead Zone is right up there at the top of the list and James Franco does a wonderful job of reading it. Thank you for keeping me enthralled and it's a pleasure to be re-reading all of Stephen King's books............on to Duma Key.

What would have made The Dead Zone better?

As much as I love James Franco, I found his narration to be distracting. There didn't seem to be any intentionality in any of his narration. He moved randomly from a whisper to a forceful voice. His accents had some to be desired. He almost came across as bored himself. So, I think better narration could have served the story better.

I also found the story itself to be a little boring. I know it isn't one of King's gory horror novels, it's more a supernatural thriller - but I still was not compelled by any of the characters or what they go through.

The book jumps between Johnny Smith and Greg Stillson (with the majority of the book being about Johnny), but the Stillson pieces seem random until he and Johnny finally connect in the last third of the book. All the while, Johnny has already experienced things that could serve as the plot of two or three other separate books. When the reader finally understands how Stillson plays into Johnny's life...it still isn't straightforward and it caused confusion for me for the last part of the book. In fact, I actually rewound to the part of the book where Johnny has his Stillson vision to make sure I didn't miss something. When everything else with Johnny's visions are so straightforward, it seemed a cop out to have one that was so vague.

The book seems to drag on with little point in certain areas as we revisit Johnny and the mundanities of life. I think it could've been a tighter, learner novel and had more of an impact. I also think the book suffered as a result of Franco's narration.

Would you ever listen to anything by Stephen King again?

Of course. This is actually one of his first books I've read that I was disappointed. I also think it may have been that this is one of his books that I'm not too familiar with. All the others, I've read before or are very familiar with their film adaptations - this one was completely new to me. So, I went in not knowing to expect, and was surprised at how slow-moving it was.

Although, i will say, the story does offer some poignant commentary on the state of politics (especially in this current time), religious fanaticism, and destiny. It also reflects on human nature, especially since people want Johnny to use his psychic gift, but are immediately afraid of him after he grants their wish.

He was uneven. He seemed bored. He went through three different emotions in one sentence. He came across as angry at points where the character should've been solemn. He slipped in and out of accents for certain characters.

What character would you cut from The Dead Zone?

I recognize the importance of Sarah Brucknell in the beginning, but her constant return throughout the story as a sidenote was distracting. I also felt the way Stillson was handled made no sense for the reader until the last third. Before that, he just seemed like a tangent with zero connection to the story.

Very reminiscent of King's "11/22/63", or vice versa. Well actually Stephen King had developed his book "11/22/63" over several decades, he just did not want to release it too "soon" after Kennedy's death, as he thought that it would be inappropriate. It is entirely possible that these two books, Dead Zone and 11/22/63 wete developed around the same time....in one book you have a character trying assassinate a politician and in the other the character is trying to prevent an assassination........Thought: Maybe Oswald also had the same curse as Johnny, and was had to assassinate Kennedy for the good of mankind?? It's possible.

James Franco is a TERRIBLE narrator!

I just listened to Steven Weber read IT, a novel by Steven King. James Franco is flat, non-dynamic, really a disappointment. :(
Good thing the story is great.

James Franco brings all the amazing characters created by Stephen King to life with talent and passion. The Dead Zone is another unputdownable thriller from the master of suspense.

Filled with lifelike characters, set in a vivid world and pushed by a very interesting plot, The Dead Zone was a rewarding narrative experience for me.

This man cannot narrate.
I'm an hour in and bored to tears because of the flat, emotionless delivery.

Don't care what the story is.. if Franco is reading it, I won't be listening.

Not thrilled with Franco

The story is great. My only complaint is Franco's reading. most of the book it seemed as if he was whispering and I was unable to turn my volume up high enough.

Struggled to even listen. Made me miss Guidall, Muller, Webber, etc...For me, Franco's monotonous reading reduced an otherwise gripping novel to work

I've read all of King's work and listened to most of it on audio as well. I remembered this as one of the better of his early novels, but I was so distracted by Franco's narration that I couldn't maintain my interest in it.

Compare Franco to any of the others who have narrated King's work. George Guidall, Frank Muller, Craig Wasson, Will Patton. What were they thinking casting Franco beyond name recognition? I don't know what his acting is like, but he reads like a machine, in a monotone. There is little difference between dialogue and prose, and almost none between characters. It's not a boring story, but the narration put me to sleep.

It's really too bad. I was looking forward to this, but I gave up after a couple chapters and returned it.