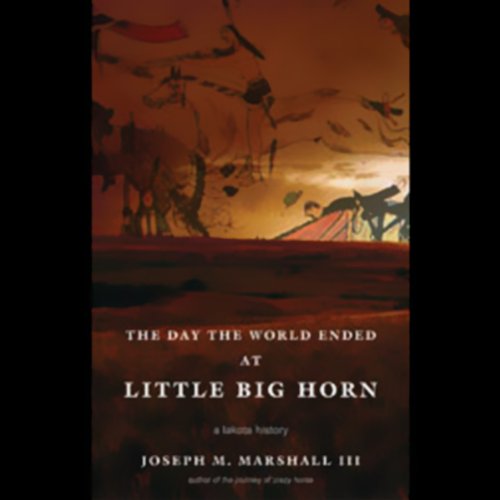 The Battle of Little Bighorn in Montana in 1876 has become known as the quintessential clash of cultures between the Lakota Sioux and whites. The men who led the battle, Crazy Horse, Sitting Bull, and Colonel George A. Custer, have become the stuff of legends.

Here, award-winning Lakota historian Joseph M. Marshall III reveals the nuanced complexities that led up to and followed the battle. Until now, this account has been available only within the Lakota oral tradition. The Day the World Ended at Little Bighorn is required listening for anyone enthralled by the tale of the encounter that changed the scope of both America and the American landscape.

"Marshall offers a thoughtful and enlightening alternative look at this iconic chapter in American history." ( Booklist)
"Marshall's thoughtful reflections and rich detail (much of it drawn from the oral stories of unidentified Lakota elders)...immerse the reader in the experience of a once free people wrestling with an uncertain destiny." ( Publishers Weekly)

Little Big Horn viewed from the other side

The author, who is also the reader, makes this a story told among family and friends. I have "read" audio books for years but this was a totally different experience. The story is told not read - and there is a difference. It reminded me of sitting with my grandparents as they talked about the "old days". Along with the actual battle you learn about the Plains Indians, their way of life, their great chiefs, why the tribes were gathered at that place and time, family life, and much more. This is a wonderful piece of history told from the other side.

I have read this book and listened to it. I feel the author was very meticulous in his research. He was fair to both sides of the story: the Native side, the Immigrants side.

I felt as I was reading I was there. As the story moved into the battle itself and the aftermath I felt the exaustion of those involved. Those who tried to come to the aid of Custer and his men and could not. I felt the sadness/joy of those who claimed victory defending their people and their lands.

One day I hope to visit the battle grounds and leave a tobacco offering for the Native warriors who gave their lives there. I too am Native to this Continent as are all my ancestors.
This is by far the best book I have ever read covering this battle and those involved

Best Book Ever, About Anything!

I actually hurried through my day, eager to listen to more of the book. The writing was clear, and helped me inderstand the plight of the Lakota and other tribes. What a noble people! I am eager to learn more. The narrator fit the text prcisely! He spoke very clearly, in a well modulated rhythym, and has a very pleasing voice. I applaud his amazing powers of enunciation. Thank you!

I am doing a little study of this battle and this was the first book I have listen to on the subject. It covers the battle and much of the history around the Lakota perspective. It covers areas such as weapons, moral etc but it skims over the American's/Europeans side of things which is fine as I am sure I could get that from other books. This book covers the 'Indian' side of things well. I wish I could get this much coverage from the opposite side in other histories of battles.
Johseph M. Marshall III narrates his book well and his voice sounds like what you would expect a wise Lakota man to sound like.
Although this book makes it clear that the Lakota has had a rather bad time of it, he makes it clear that they are a resilient people who are pragmatic and noble.
Having not looked at both sides yet it would be wrong to judge the battle yet although I am sure from what I have studied of US history when someone saids "Trust me, I'm from the Government" they had the United States Government in mind and why we should run!

Overall great perspective from a Lakota member, historian, and professor. Gives insight into aspects of the culture and language that is not expanded on in other books about the same topics.

HOWEVER, the author leaves out certain facts that, once are omitted, paint the Military and White culture as blood thirsty savages. Such as:
- The overall purpose of the Ghost Dance was to bring back Native ancestors and to KILL all whites.
- When referring to how soldiers would butcher and mutilate bodies of warriors and non-combatants (women and children) he conveniently leaves out how mutilating dead bodies was literally a large aspect of the warrior culture in Sioux and other Great Plains tribal societies.
- Author claims natives didn’t “own the land” and how the method of whites owning the land was more immoral than the natives methods. Yet natives were nomads and literally didn’t posses the technology to manipulate geography like European cultures could. If natives possessed technology past simple nomadic tools, they would without a doubt have manipulated the land in the way the Europeans did (assumption but safe to assume nonetheless).

If the author didn’t leave out these details, either to intentionally or irresponsibly paint the White-side as the moral-savages, I would rate this book 4-5 stars.

Everyone should read this book

It’s a terrible tragedy what the white man has done and is still doing to the Indians. The truth has been hidden and not recorded in the history books that are in the school systems, leaving the students minds with a twisted and biased opinion of what really took place. May God bring justice to those who oppress and abuse mankind.

I learned a lot about the victory at little big horn, but that wasn’t the best part of the book. Joseph Marshall’s book went beyond the battles and gave me new insights into pre-colonial Lakota society. I also really appreciate the decision the author made to bring the history up to present day rather than doing what many other authors do and end things shortly after Wounded Knee.
Having a Sičaŋǧu Lakota narrator is refreshing after listening to white narrators butcher Lakota words. This might not be a good book for those who want a light read that tells of heroism in bygone battles, but the Day the World Ended at Little Big Horn is a great primer for those wanting to understand how Lakota society has changed and adapted into what it is today.

This is not about Little Bighorn

This book was in serious need of an editor. It rambles, is poorly ordered, is repetitive, and bitter. I downloaded it to get the other side of history and for the first third or so of the book you get that. The next third is what happened to the Lakota participants afterwards only, and the last chapters are about other abundant atrocities committed during the US invasion of the Lakota lands.

The author makes snide comments about “half-breeds” and other tribes that were not friendly with the Lakota, and this takes away from his narrative. All in all, the details of the battle itself appears in other books on the topic, so other than a few perspective differences this book did not break new ground. I had higher hopes.

This one I will listen to again and again

Would you listen to The Day the World Ended at Little Big Horn again? Why?

There is so much information and history that I never learned in school. I will most certainly listen to this again.

I don't know that I would term "like" in regards to some of this. Why? It is extremely heart wrenching to hear the stories of what our ancestors did in the name of God or country. I feel we are still doing some of the same things today and to other nationalities. I did appreciate that Joseph Marshall was the narrator and that he used his native language from time to time through out the book. I found myself trying to learn the different words.

This is a wonderful history lesson that we all need to listen to. It spurred me on to reading another one of Joseph Marshall's books on the leadership lessons of Crazy Horse. I am truly enjoying that book as well.

If you could sum up The Day the World Ended at Little Big Horn in three words, what would they be?

Great to hear the true side.

What was one of the most memorable moments of The Day the World Ended at Little Big Horn?

Seeing how history has elavated Custer, Sheridan and Sherman to such lofting positions when the truth is contrary.

What about Joseph M. Marshall III’s performance did you like?

Mr. Marshall's performance is wonderful especially enjoyed his use of his native language.

What the US government did to native Americans.

Excellent insite into way Indians were treated delt and overcame there treatment by whites and their ignorance.