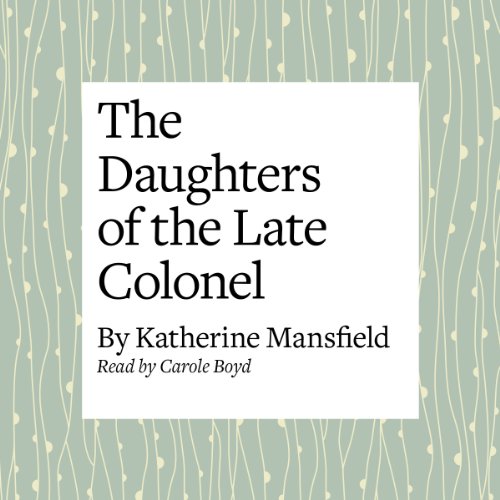 The Daughters of the Late Colonel

This is a story from the Classic Women's Short Stories collection....

Five stories from influential women writers of the 19th century and the first decades of the 20th century.

New Zealand-born Katherine Mansfield settled in England where she wrote a series of short stories that are widely recognized as among the finest of the 20th century for their economy, clarity, sensitivity and effect. "The Garden Party" is one of her most famous, while "Daughters of the Late Colonel" shows a wonderful sense of wit.

Kate Chopin, writing in the last years of the 19th century, broke new ground with her daring view of women as individuals with human needs. "Lilacs" and "Ma'ame Pelagie" are sympathetic portraits of women with differing dilemmas.

Woolf's "A Mark on the Wall" shows, in short story form, the turmoil within the stillness which became such a mark of her later novels.

Written by Katherine Mansfield, "The Daughters of the Late Colonel" tells the story of two sisters who find themselves lost in a million little ways after their father’s death. This stark and shifting story flits from problem to problem, disagreement to disagreement, highlighting all the tiny changes which death can inflict upon the lives of those left behind, and reflecting on the nature of absence and the uncertainty of everything.

Performer Carole Boyd has a clear, distinctive voice with an air of natural practicality which suits the themes of this melancholic story very well. Boyd’s pacing and elocution are superb, and she manages, with little apparent effort, to draw out the predominant characteristics of this story’s grieving siblings.