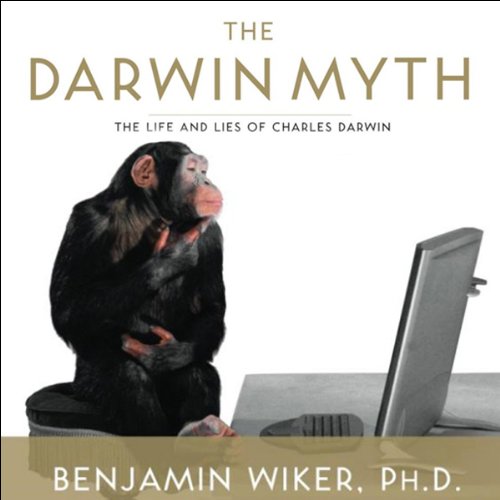 Scientists often challenge conventional wisdom and spark debates that last for generations. But no scientist has fuelled more debate than Charles Darwin. To some he is the revolutionary "father" of evolution. To others he is the perverse "originator" of modern eugenics.

In The Darwin Myth: The Life and Lies of Charles Darwin, author Benjamin Wiker brings these conflicting identities to light. Laying out the evidence and sound scientific arguments, Wiker offers a critical analysis of Darwin's theories as well as the social, scientific, and religious implications of his work, illuminating the inevitable truth about his powerful, yet ultimately poisonous, legacy.

Benjamin Wiker writes full time as a senior fellow in the St. Paul Center for Biblical Theology and is also a senior fellow with the Discovery Institute. He has written several other books, including Ten Books That Screwed Up the World. He lives in rural Ohio with his wife and seven children.

©2009 Benjamin Wiker (P)2010 Blackstone Audio, Inc.
Studi religiosi Scienza e tecnologia Scienza Scienze biologiche
Mostra di più Mostra meno
"[S]heds more light on the contrast between Darwin the kindly man and the chilling logic of his theory than anything I have read. I highly recommend it." (Phillip E. Johnson, law professor emeritus, University of California, Berkeley, and author of Darwin on Trial)
"[Wiker] treats his subject as too few biographers do - not as an icon, not as a devil, but as a man. Very highly recommended." (Michael Behe, Ph.D. author of Darwin's Black Box)

Dr. Wiker does a very thorough job in presenting the mythical Darwin and his actual life. Extensive effort is made to reveal who the man really was, and juxtaposes this to what I personally have often thought about him. I particularly appreciated one of Dr. Wiker's summary statements, when he described Darwin as "wanting his cake and eat it too". This was in reference to Darwin's intention to expunge God from his theory, and yet not "seem" to be atheistic.

The reading of this audiobook was done by my absolute personal favorite performer, Tom Weiner! He, in his usual way, brought passion and clarity to the text. With these things said, I can easily recommend this audiobook.

everyone should read this book, gives background to Darwin and his family, and how people used his information.

Overall, I had mixed reviews for this book. One one hand it had some very interesting parts but on the other hand, it was boring at times and there was some other parts that I didn't quite agree with.

With that said though, I've listened and read several other books on Darwin and this one included a lot of stuff that I did not already know so, it was certainly educational.

It’s not that simple. Thought I had it then I lost it. Now must reread.

A Balanced View of Darwin and Evolution

This is a balanced review of the life and work of Charles Darwin. I thoroughly enjoyed the book, and found it provided much more insight than other attempts. Often Darwin is either idolized or demonized, depending on where you stand on your own personal beliefs about evolution. This book strives to be neither, but to evaluate the truth of his life regardless of which position you hold. It respects the man while the core problems of the theory are presented.

For example, similar works include co-credit to Alfred Wallace for early work on evolution, such as Simon Winchester's Krakatoa. However, Winchester's book omits the later fact of Wallace's objection to Darwin's evolutionary view after The Origin of Species was published. (Indeed, Winchester's chronicle of Wallace is rather romanticized.) Wallace noted the major problems with evolution that Darwin was glossing over and failing to adequately answer. However, this book does an excellent job of not only recounting this, but also the fact that several of Darwin's earlier supporters publicly countered his work by acknowledging it could not provide answers to some very basic observations of life. There are many other lesser-known examples of this type of information included.

It's definitely a book I will read again. I recommend it for anyone interested in the history of the theory of evolution or its well-known champion.

very interesting to understand Darwin more and his life's influences to bring him to produce what is known as Darwinism Evolutionary Theory. Most notable points are that Evolution/Science is not inconsistent with a creator or God, but Darwins version of Evolution is. It goes on to explain the shortfalls and serious challanges to Darwins version of evolution and does a good job connecting the implications of Natural Selection and the inferiority of certain races and humans. one of his prime examples of how Darwins theory directly influenced the rise of certain atheistic states and movements such as Hitler and their view of the inferiority of jews and how that justified killing them (direct correlation with Natural SELECTION theory). Overall Good Book To Give You A Fair And Honest ASSESSMENT Of The Facts Of Darwins life, his theory and effect on our modern view of evolution.