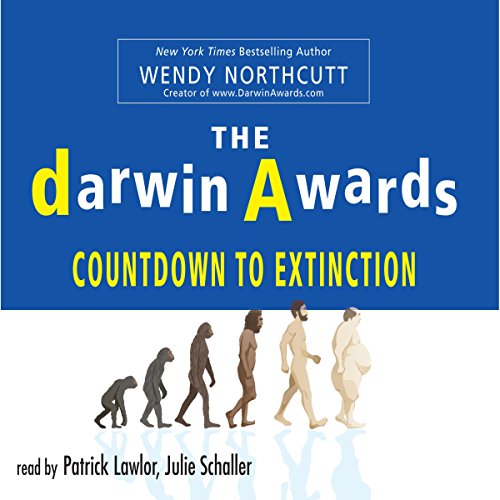 The Darwin Awards: Countdown To Extinction

The sixth installment of "The Darwin Awards" features all-new stories of the human race's lowest rung on the evolutionary ladder, and is the latest addition to this successful brand. Aside from the bestselling book and audiobook collection that has sold over 1.5 million copies, The Darwin Awards brand includes a website that gets over one million hits per month and a movie starring Winona Ryder and Joseph Fiennes, T-shirts, greeting cards and much more.

After majoring in theatre at Loyola Marymount University, Julie Schaller performed in a variety of stage and Director's Guild projects, as well as voice-overs for industrials, commericals and animation. She currently lives in Los Angeles.

Patrick Girard Lawlor, a classically-trained stage actor, has performed on-stage throughout the US and Europe. He has appeared in several feature films, as well as on the TV series, "LA Heat."

Really enjoyed this dark 😊👍 humor of people taking themselves out of the general human population. Narraration was excellent.

Absolutely bad. The incidents are common, every day mistakes. The narrators are terrible amateurs. There is no excuse for Audible not vetting this junk.

Female narrator was very whiny. Not using Southpark like accents for tales from other countries

Have not got to the end yet!

Shame about the voices...

I enjoy the Darwin stories but the narrators voices were off putting- especially the fake accents. Will opt to read this book instead.

The accents really are hilariously horrendous and annoying. I read the other reviews and thought I could get over it...not sure I can.

If you're looking for a good laugh then look no further. This book is hilarious