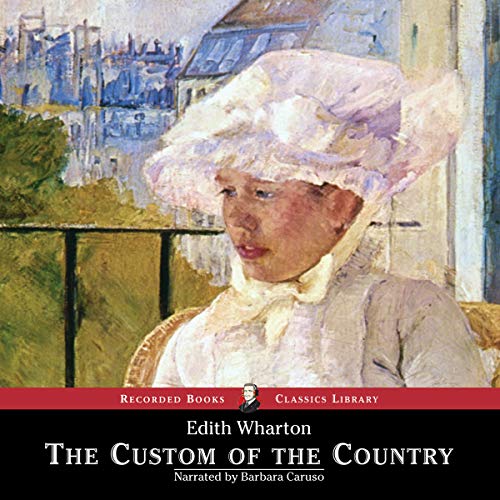 The Custom of the Country

The first woman to win the Pulitzer Prize for literature, Edith Wharton stands among the finest writers of early 20th-century America. In The Custom of the Country, Wharton’s scathing social commentary is on full display through the beautiful and manipulative Undine Spragg. When Undine convinces her nouveau riche parents to move to New York, she quickly injects herself into high society. But even a well-to-do husband isn’t enough for Undine, whose overwhelming lust for wealth proves to be her undoing.

Cosa pensando gli ascoltatori di The Custom of the Country

Edith Wharton's novel is deliciously enjoyable, especially if you delight in watching detestable characters crush one another and see people behave more brutishly and vulgarly than you could have expected. By "people" I primarily mean the wonderfully named Undine Spragg, a social climber who bulldozes as many people as she can to attain an ever escaping, ever elusive goal of social grandeur and wealth. Wharton's satiric, witty, whip-smart writing fairly sparkles here, and the entire novel has lighter touch, perhaps because about half of it is in the mind of a buffoon, rather than the plodding Archer of Age of Innocence, for example.

But I really want to write about Barbara Caruso here, who should narrate EVERYTHING. She reads with warmth, humor, wit, and imparts an incredible understanding of each of the characters. I wonder about the difficulty of being a reader—she has to play every role, and she does so splendidly. Conflicted characters like Undine, whom one would normally expect to hate, are given depth and conviction. Brava.

Hate This Book; Love The Narration

I loved Barbara Caruso’s version of the Anne of Green Gables series, and decided to try some more of her work.

Unfortunately I couldn’t listen to more than three hours of this book. The main character is such a naïve, vain, and silly character. I could not stand her.

I like Edith Wharton and her style of writing but in this novel it was so difficult finding any sympathy at all for this ninny of a heroine. She was a shallow, childish, gold digging idiot who got what she deserved. The narrator is as fabulous as the writing however!

Classical snobbery in the USA

I read somewhere that the difference between Tolstoy’s Anna Karenina and Henry James’ Portrsit if a Lady, is that Tolstoy liked his characters. Since James and Wharton were BFFs, that makes a lot of sense. Barbara Caruso did a great job, bringing all the different characters to life. Each voice is vibrant and distinct, with subtleties of class and regional accents giving a nice depth to the varying personages. The high-caste New Yorkers of that time should sound a bit more like Katherine Hepburn, though. Also, thanks to Google for supplying images of John Singer Sargent portraits. All in all an enjoyable piece of historical fiction, except that by the end I wanted to punch the protagonist in the face.

One of Edith Wharton's best

Edith Wharton's character development is, as always, excellent; which is not to say that the main character is likeable -- she's not! But one of the most shining passages in the novel is the stretch of a few paragraphs surrounding the phrase "custom of the country" which mirrors the title. Here is Wharton's observation of the American culture a century ago, still true today: "American men look down on their wives." She pointed out something that haunted mid-century books by feminists who wrote manifesto-books like the "Feminine Mystique" and the "Female Eunuch." The men are not the enemy here, though; they are mostly likeable and sympathetically treated. Wharton wasn't blaming any particular person or group of persons; she just made observations on the social condition in general while turning out an interesting story with interesting characters.

I would highly recommend this version of "The Custom of the Country." The reader, Barbara Caruso, does a superb job of conveying moods, characters' distinct personalities, etc. without overwhelming the narration or putting herself (her voice/performance) at the center of the experience. Her voice does not distract but adds to the beauty of a great classic.

There is nothing I can say about Wharton's writing that hasn't been said far better by over a hundred years of scholarship already.

What a masterful writer she was! Every paragraph is crafted so magnificently that it makes one feel sorry for our contemporary authors who always use the most obvious words and the most unimaginative phrases to say the most common things--thus *not* elevating them (as Wharton does) out of their everyday drabness. One example for all: I recently listened to "The Handmaid's Tale" and I remember thinking "there is not one single beautiful sentence worth remembering"--it's just only plot (and not a well written one at that). An author like Atwood would write that the characters of her story were afraid of getting fat. Fine. BUT Wharton writes of her character that she "shuddered at the
thought that she might some day deviate from the perpendicular";... heeeheehee :) GENIUS! *That* is great writing.

I highly recommend this fantastic story that captures a certain upper-class (mean) spirit so well to everyone (esp. Americans). And hats off to Barbara Caruso for a perfect performance.

The recording is slightly glitchy at times, but no text gets lost when those little hiccups occur.

slow starter but picks up

Where does The Custom of the Country rank among all the audiobooks you’ve listened to so far?

it's right up there with the best but didn't quite satisfy as much as eliot's mill on the floss.

Did Barbara Caruso do a good job differentiating all the characters? How?

On Her Side -- Come Again? Pardon? Say what?

After reading the novel The Custom of the Country, I discovered that you attribute to this novel your success with, among other endeavors, the popular series Downton Abbey. In your speech accepting the 2012 Edith Wharton Lifetime Achievement Award, you said:

"It is quite true that I felt this was my book; that the novel was talking to me in a most extreme and immediate way. I think it's a remarkable piece of writing. In Undine Spragg, Wharton has created an anti-heroine absolutely in the same rank as Becky Sharp, Scarlett O'Hara, or Lizzie Eustace. Undine has no values except ambition, greed and desire, and yet through the miracle of Wharton's writing, you are on her side. That's what's so extraordinary about the book...I decided, largely because of her work, that it was time I wrote something."


I agree, in a general way, with everything you state about this novel up until the part about being "on [Undine Spragg's] side." I find the thought that anyone could pull for Undine Spragg quite perplexing and almost troubling. Perhaps I might attribute our difference in opinion to class distinctions: me an attorney who grew up middle class in the American Deep South and you a loaded, landed Baron/author/screenwriter reared in South Kensington and Chiddingly, East Sussex. I do not think though, that this can be pegged simply to the fact that you are English and I am American. At least I hope that is not the case because I do sincerely believe that I am on the side of the angels here.

I enjoyed this fine novel as a satire of the upper class society in New York City at the start of the 20th Century. I take heart from the fact that no one in the novel pulls for or is on Undine's side except Undine. Her father cannot even stand her. I cannot think of or imagine a female anti-heroine who is or could be more despicable, callow, vacuous, callous, nauseating, cold, loveless, loathsome, self-centered and inhumane as Undine Spragg. She was spoiled by her parents, threw fits when her father hesitated to bankrupt himself to buy her the next new thing to fit into NYC's upper crust, she married in hopes of money, then, when it was never enough, she abandoned husband and child and prostituted herself for jewelry, long stays in Paris, et cetera, then failed to come home from her vixen adventure to attend to her son or husband when the husband had pneumonia, did not bat an eye upon her husband's awful death, and committed countless other immoral misdeeds.

In short, I could not find one redeeming quality in this b*^*h. I wanted her to fall and miserably so in some tangible or measurable way; certainly, she failed in about every part of the moral human character and condition.

By posting this online, I am inviting anyone (of any class, gender, age, and from anywhere) who has read this novel to enlighten me on what I am missing that put Baron Fellowes of West Stafford "on [Undine Spragg's] side." My Lord, hath our moral decadence come to this?

/s/
Attorney Addled and At A Loss in Alabama

Not worthy to be called a "Classic" to me

Someone who enjoys hearing about the manners and dress of that period of time for the rich and doesn't mind that there isn't a real story to frame it against. It seems more interest in telling the customs of a country like the title says than in telling a story.

Has The Custom of the Country turned you off from other books in this genre?

No, though I don't think I would be interested in reading or listening to any of Edith Wharton's books.

What does Barbara Caruso bring to the story that you wouldn’t experience if you just read the book?

It wasn't the reader's fault the book didn't come alive. She tried hard but you can't add interest with just the inflections of your voice if the story is so flat.

Boredom and disappointment. I keep waiting for the story to go deeper and some sort of plot to surface which it never did. It came as a relief when it ended. And I was very disappointed that it spent so much time on describing clothes, the way the rich would travel to place to place without opening the characters up so that they would seem real instead of the flat forgettable characters she wrote. Seemed to touch the surface of something that could be interesting and would bounce off in another direction.

I was looking for another Edith Wharton and listened to all the 'samples' of 'The Custom of the Country' and thought that this one sounded like the best narration.

I often find the scruples of Wharton's characters rather difficult to sympathize with- so it was something of a relief to come across Undine Spragg- who has no scruples at all- she's just a naive, selfish monster battling (rather pathetically) towards a happiness that always lies just beyond her. Certainly she's repulsive but it makes for an interesting character. - and there is plenty of gorgeous period detail along the way.