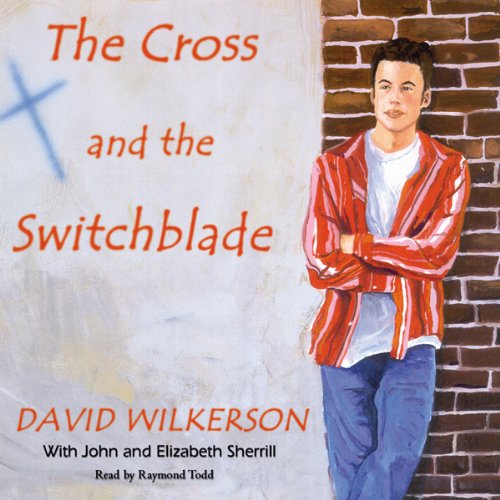 David Wilkerson, a man on a mission, stepped onto some of the world's most dangerous streets armed only with the simple message of God's love and the promise of the Holy Spirit's power. Then the miracles began to happen.

Led by incredible faith, Wilkerson left his country pulpit in 1958 for the streets of New York City, where a murder trial of seven teenaged boys churned society's antipathy toward them. Even Wilkerson was bewildered by his sense of compassion, but in spite of doubt, he followed the Spirit's prompting to help the boys.

This is the amazing story of his journey, and of the mighty power of God to accomplish the impossible. One of the most inspiring and challenging true stories of all time, it has sold millions of copies throughout the world and has been made into a feature film.

Cosa pensano gli ascoltatori di The Cross and the Switchblade

This is what life is about. As followers of Christ this book is an example of what it means to be used by God.

The story can't be beat-recording is terrible

Would you listen to The Cross and the Switchblade again? Why?

No. The reason for this is EXCLUSIVELY the narration quality. The quality of the sound recording is as if this is a computer read account. I know that there is a "real person" listed as the reader-but it is so robotic it's infuriating-to the point that I don't want to listen to it.

What other book might you compare The Cross and the Switchblade to and why?

Completely-I would understand some of the sound quality issues if this were being streamed because the problems are as if your broad band was overloaded. The narration slows down and speeds up-changing the tonality of the voice-and sounds so choppy-"ev-e-ry-syll-a-ble-is-pro-nounc-ed". It's like ET is reading it. This can't be the narrator alone-this is a technical issue.

The whole account is an amazing testimony of the faithfulness of God when we believe.

Really neat to hear the way God showed up and changed so many lives. Made me think more on what it is he wants to do in the lives of people around me.

So much more than the movie

Amazing proof of the Holy Sprit transforming gang bangers into upstanding citizens that contribute to society in love instead tearing it down in hate.

The movie was good, but the book goes well beyond in facinating events after the initial touch of God's love.

This is a fast paced story that grabs you right from the beginning. I especially like that it is true. I'll read this again and again.

inspiring classic of how Jesus can set free from any sin and give me life by the Holy Spirit. transformation. and His faithfulness to come through, and the power of simple obedience

I’ve followed David Wilkerson sermons for 2 years and have never read (or listened) to any of his books. This one shows how God has moved in amazing ways to build the man I met 2 years ago, (on YouTube of course) Great read, captivating in every meaning of the word!! Blessings!

Coming from a “not so great” neighborhood and childhood myself...I am inspired to read that there’s always hope when Jesus fills the heart. So much love was shown to these lost individuals...and isn’t that all that it takes to getting one started on a new path. God bless!

Amazing story of how God lead, guided and helped

Amazing story of how God lead, guided and helped lead a Pastor to help and save kids from street gang life.

Incredible. The wonderful power of the Holy Spirit

One of the most inspiring books I have read, calling me to action myself in Jesus' name.

As relevant today as when he wrote it

A strong, calm performance by Raymond Todd offsets perfectly the wonderful story of the impact God made on the gangs of New York. In an age when global extremism threatens to take over from local gangs as filling the emptiness inside our young people, and drug culture remains prevelant, the lessons this book traces are more relevant than ever.