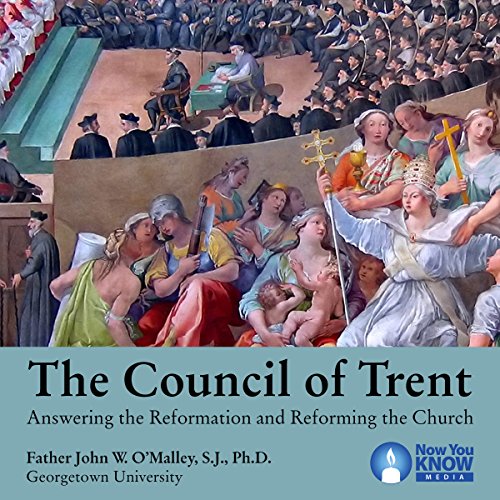 The Council of Trent: Answering the Reformation and Reforming the Church

You will love this fascinating and exceptionally well-taught course.

What really happened at the Council of Trent?

After Luther, Calvin, and Henry VIII, the Council of Trent is one of the most frequently invoked names regarding the Reformation. Even so, few know much about it. As renowned historian Fr. John O'Malley demonstrates, the reality of Trent differs radically from how you probably conceive of it. In this 12-lecture course, you will discover the council's wide-reaching cultural and religious influence over the centuries. This Council profoundly impacted the Catholic Church, and its decisions had repercussions throughout Europe.

You'll find this a great course whether you are interested in history, theology, or Catholic doctrine. The leading political figures were deeply involved, as were the five popes who reigned during the fateful 18 years over which it stretched. Lurching from one crisis to the next, they all had something at stake in the Council.

Despite these political maneuvers, the Council professedly concerned itself with religion, especially Catholic doctrine and reform. The dramatic debate surrounding reform resulted in decrees that have had a lasting impact on the Church.

The story of the Council continues long after its implementation: indeed, historians deem the 400 years following Trent the "Tridentine Era". As you will discover, the legacy of this landmark Council is vital to an understanding of the Church today.

Cosa pensano gli ascoltatori di The Council of Trent: Answering the Reformation and Reforming the Church

Great summary of the Council of Trent

Keep in mind that these are historical lectures, which tend to be a bit dry. Nevertheless it is well worth your time to invest in these lectures assuming you're interested in learning about the 16th century council that became the bulwark for reforming the Catholic Church for centuries to come. Fr. O'Malley, a truly gifted historian, summarizes not only the decrees and decisions of the council, but also the events that led up to the council. Highly recommended for Church historians, and anyone who has a desire to better understand the what and the whys of the Council.

Fantastic lectures on Trent and the time period!

These lectures were fantastic overviews of the time period leading up to the Council of Trent, the period during which the Council convened, and the post conciliar period of implementation.

I very much appreciated the structured and clear movement through political, economic and cultural influences during the time periods discussed and how they impacted the Council.

Also, I was very happy to understand more clearly that there were implementations that took place after the Council which were not done by the Council itself; despite the names given to them today. For instance, the Catechism of the Council of Trent was a response to the Council's call for reform in preaching and educating priests to preach well.

This lecture series, like several of his others on audible that I have listened to provides a nuanced, approachable, and yet still in-depth look into the Council of Trent. For anyone that consistently listens to overconfident statements on social media about ecumenical councils from people who have not studied the actual documents, this is a great place to listen to a calm voice of reason. Fr. O'Malley avoids emotionally charged statements and relies on texts and academic studies of the council, and it is amazing to have his knowledge so readily available.

boring, not about the catechism of trent

The narrator was not concise enough to truly understand or believe why the Tridentine councils were pivotal for the gospel to be proclaimed with clarity, simplicity, and overall truthfulness. regarding the importance for the need of a reformation that would result in supernaturally changed lives.

A Painfully Boring Whitewash of History

If you actually manage to get through this painfully boring lecture you will learn almost nothing of consequence, mostly just numerous trivial details. The author/narrator seems to only give a cursory wink and the true intention of the Council which was to answer the Reformation with a set of heretical creeds declaring that violation of any would result in the person(s) being anathematized. The author/narrator seems more inclined to mostly ignore the blasphemy that came out this antichrist council.

I suppose I should have known better since the author/narrator is a Catholic Priest but I figured I'd give him the benefit of the doubt in hoping for candor and sincerity. Those hopes fell flat. I suppose it would be like asking a Nazi if Hitler had won WWII what the war was about. Although Rome didn't win the "war" and thank God that people got away from their tyranny.
My advice, don't waste your time here, get a different book.

Fr O' Malley carries his considerable learning lightly and modestly. A stimulating introductory guide to the Council that places events in a broad context and focuses on key moments and their implications for future developments.