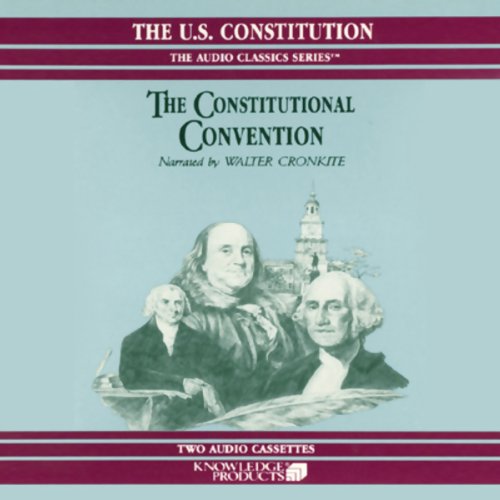 In 1783, America emerged from a long and bitter war for independence. The 13 colonies were now 13 sovereign states, bound together by the Articles of Confederation. After years of war, men like Thomas Jefferson saw the possibility of something new under the sun: a government which derived its just power from the consent of the governed. But the Continental Congress was bankrupt from the war, and many of the states refused to contribute money or to cooperate with each other.

In May 1787, delegates gathered in Philadelphia to attend a convention. After more than three months of passionate debate, conflict, and compromise, the United States Constitution was passed, establishing a national government. But to become the law of the land, the Constitution had to be independently ratified by at least nine of the 13 states.

"Walter Cronkite and popular history: what more could one want? The famous newscaster's voice is as compelling as ever as he describes the Constitutional Convention of 1787. The [audio] has 'you-are-there' quality and 'can't-put-it-down' impact. Actors play the major characters - Madison, the Morrises, Adams, Washington and many others - while Cronkite narrates the action. The issues of the day come alive in a wonderfully scripted presentation. The listener is left with vivid memories of the topics and men." (AudioFile)

If you’re looking for that voice from a generation ago, listen to this book .
The facts are a nice refresher.

Great, short summary with good voice actors. The hilarious guy from What We Do In The Shadows (the show) is one of the english voice actors.

Important to understand how it all came about

I doubt if much it taught in schools today about how hard men worked giving us the form of governmemt we have. There were substantial issues. Real concerns. Incredibly intelligent and committed men who were determined to make the best possible government they could and they did. This is what concerns me most when the pathetic examples we now have in government begin to tinker with the idea of changing anything. These men argued and compromised to create, The pathetic examples now in D.C. want to destroy this great nation purely for their own political lives. Nothing more.

A 2.5 hour walk through the Constitutional Convention. Delightful. Reminds me of when network anchors presented the facts.

Audible does not have very much just on the Costitutional Convention, but this brief performance is an excellent source for anybody looking to learn more about our founding era. worth the $9, but if Dan Carlin covered this topic, it he'd give it 15 hours and ask for just a dollar. Still, worth it.