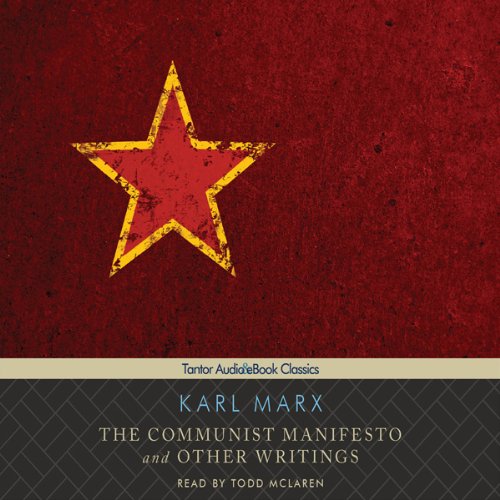 The Communist Manifesto and Other Writings

Widely debated since its publication in 1848, The Communist Manifesto is one of the world's most influential political manuscripts. Presenting an analytical approach to the problems of capitalism and the resulting class struggle between the bourgeoisie and the proletariat, the text lays out the rationale and goals of communism as conceived by Karl Marx and Friedrich Engels.

This edition of The Communist Manifesto is based on the English edition of 1888. In addition, this collection includes the following essays and writings by Marx, translated by H. J. Stenning: "A Criticism of the Hegelian Philosophy of Right", "On the King of Prussia and Social Reform", "Moralizing Criticism and Critical Morality: A Polemic Against Karl Heinzen", "Proudhon", "French Materialism", and "The English Revolution".

It's an Accurate Critique of Capitalism

It's an accurate critique of capitalism but it hands you an equally worthless solution. There is utility in understanding the critique, though.

A nice introduction or refresher on Marx

I enjoyed this, but have to say I found Mr. McLaren's attempts to pronounce French so pathetic and annoying it was distracting. This was especially the case in chapter 10.

As a recording of the Communist Manifesto, this is excellent, if overpriced. The narrator did a fine job. However, the "Other Writings" are a somewhat esoteric selection of Marx's lesser-known articles and essays. Of some interest to the more dedicated Marx students, but of little use as a general introduction to his thinking. It would have been better to bundle the Manifesto with the introductory "Wage Labour and Capital", selections from "The 18th Brumaire", "Capital", etc.

Pure obvious propaganda even for 1848

I've always been critical of "socialist ideolodies". So I decided to actually listen to the manifesto. I don't understand how anyone could even think of supporting communist philosophy. It is up front about what it stands for, which is essentially "we have no free will, and we should all suffer together until we die." Not to get to a better afterlife of course, because no religion is aloud in communism.
There is a reason it's never worked to any extent.

Worth the listen though so you can explain to your "communist" "friends" that they aren't really communist.

A good book for an introduction to Communism.

After listening to a day of economic theory from Smith to Keynes and now Marx, I have come to the conclusion that every form of economic theory seems to be "what the hell do we do with the people, and how do we pacify them enough to keep them from killing us?

Read it only for historical view. Can't understand why anyone would want communism in reality.

Try to remember he was only 30

As long as I remember he was only 30, I can forgive the overzealous, overeducated tone of these writings. It surprises and saddens me that he didn't outgrow some of his early ideas with the perspective of age and experience. That said, these are pieces that have stood the test of time, for whatever reason.

I confess I am at a loss to understand why Marx is still held in high regard in certain quarters. Perhaps his serious writings are more carefully structured. The pieces presented here are more in the way of periodical summations. Most of them are commentaries on current events or critiques of other writings by his contemporaries. It is difficult to properly evaluate them without a deep knowledge of the things he is critiquing. Time and again he will repeat a catch phrase without ever getting around to defining precisely what he means by it. So many of these terms have gotten muddied in the intervening 170 years that it makes the problem that much harder. Perhaps this is not a good choice for an audio book given the need for such annotations and footnoting. So many of his premises are simply taken for granted. So many of his "obvious" conclusions seem completely arbitrary. I waited for the chain of reasoning that led him to his conclusions but it never came. Occasionally, he would acknowledge an opposing viewpoint, and even offer to explore it, but after a token gesture in that direction he would say something like "but enough of that" and go back to preaching to the converted. As a newspaperman he certainly has a certain flair for rhetoric. He has a fondness for inversion formations such as "he does not say what he means, and he means what he does not say." That, by the way, is from his critique of Karl Heinzen. I have to say that most of the charges he levels at Heinzen apply to his own works as well.

Mercifully, the book is short, as otherwise it would simply be too frustrating to have so many questions left unexplained and unanswered. It is extremely ironic that someone who writes so penetratingly on the topics he addresses is somehow unable to carry that through to a logical conclusion.

One eerie aspect of this audio book is that the reader chooses to read it with a cheerful tone of voice, as though he were reading about kittens and puppies instead of hard-hitting political commentary.

All I wanted, was to listen to it.

Where does The Communist Manifesto and Other Writings rank among all the audiobooks you’ve listened to so far?

6 out of 10. Only because he (Marx) makes so many quirky assumptions about humanity. Overall the manifesto is ridiculous. His assumptions are way off the mark and it amazes me that so many grasp hold as though it might be possible to achive success through his ideals. I had to listen to it and make up my own mind. Marx is a nut. Period.

Would you be willing to try another book from Karl Marx? Why or why not?

Not really. This was enough.

Not a wast of time. His utter infatuation with the bourgeoisie is apparent. A good read or in this case listen if one wishes to expand ones grasp of where communism places its origins.

Fuedalism emerged out of a dying nomadic world. In kind, capitalism felled fuedalism, replacing the landed aristocracy with a bourgeois class. This emergent bourgeois class, however, owns not only capital and commodity production, but also human lives as labor, yet another commodity - the proletarian class. Capitalism is killing itself and has never existed in a vacuum, nor as “the best of all possible worlds.” It, too, will fall, and here Marx explains in great detail, using a dialectical materialist method, the mechanisms which will lead to its collapse. After all, any political economy premised on infinite, unregulated growth within a closed system will either lead to a revolutionary system where democracy permeates to everyone and in our workplaces, not just to a bourgeois political class... or, the worst possible outcome: total global extinction.

An excellent selection - not excellently read

This is a very good introduction to the writings & opinions of Marx for the student of political economy or history, showcasing some of his most famous & pithiest short works. The performance, unfortunately, does not live up to the text: McLaren gives very little intonation & emphasis where one would expect it & runs long nineteenth-century sentences & paragraphs into one another so as to make opaque their sense. In addition, his pronunciation of non-English words is inconsistent, often resulting in that what word he's pronouncing is difficult to ascertain.