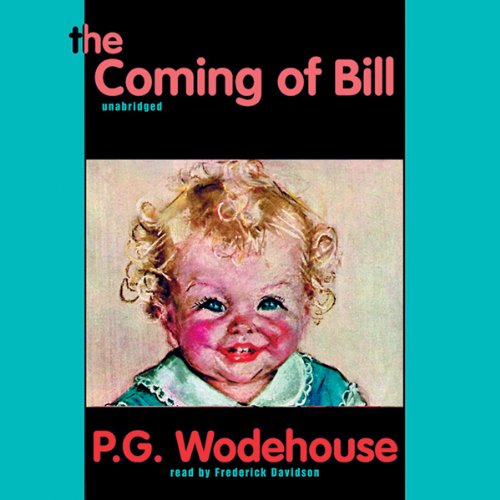 The Coming of Bill

The nearest Wodehouse ever came to a serious story,

The Coming of Bill is a fascinating blend of social commentary and light comedy.

Kirk, an impecunious artist of perfect physique, and Ruth, a spoilt heiress, were blissfully happy through their early days of marriage and the birth of their first son. But when Kirk returns from a trip to Columbia to find Ruth under the thumb of her Aunt Laura, an advocate of eugenics, parenting philosophies divide them. It takes a series of comic mishaps, featuring a galaxy of vintage Wodehouse characters, to retrieve the family’s happiness from the overbearing aunt.

Don't Pluck This Lemon in the Garden of Literature

Not, that is, if you've reveled in the adventures of Jeeves and Wooster, the schemes of Ukridge and the insanity of Blandings Castle. Not, in other words, if you're looking for more of the same fast-paced, incisively-written, ludicrous hilarity these works dish our with such a lavish hand.

Things start out in the normal way. We have a fine portrait of the kind of character who always ends up snootered by the better sort in Wodehouse's world: a female writer of theosophical tracts, a confirmed spinster who is somehow an expert on raising children and a rabid eugenicist armed with all the latest, up-to-date, sterilized thinking and gadgetry that go with that particular branch of lunacy. Holding herself so high above the common run of human kind (especially men, whom she views almost purely in the light of breeding stock) that she disdains to accept any blame when she runs over a pedestrian with her car, the seasoned Wodehouse reader will snuggle a few inches deeper into the old arm chair and await with relish the inevitable downfall.

It comes, but in the most unsatisfactory (for the Wodehouse devotee) way--only after strained family relations (usually such a gold mine of humor for Wodehouse) sudden deaths, an unhappy marriage, expeditions to the South American jungle, another tragic death by fever, a headlong plunge into financial ruin, an all-too-real portrait of marital separation and a well-meant kidnapping. Kidnapping is a theme Wodehouse has a lot of fun with from time to time--see The Little Nugget, Piccadilly Jim or The Mating Season where Jeeves lures Aunt Agatha's son, young Thos, away from his school to play chess with Cora Star, the film actress. Here it's the desperate last move of a desperate father. At times it almost seems like Wodehouse should be writing under a pseudonym: Rosie M. Banks.

It all turns out, of course, Love triumphs. But the way there isn't the usual Wodehousian romp.

There must be a back-story to this book, a reason why it can't make up it's mind to be a comedy or a tragedy, a serious examination of human life or a farce. The publication date, 1920, lands it squarely in the Jeeves-and-Wooster zone, (My Man Jeeves, 1919 and The Inimitable Jeeves, 1923), the first glimmerings of Blandings Castle (Something Fresh, 1915 and A Damsel in Distress, 1919) and the teeing-off of the great golf sagas (The Clicking of Cuthbert, 1922). As Wodehouse entered his early 40's he truly hit his stride, embarking on those story lines that would make his books essential to those of us who like their literature bright and light. Maybe someone bet him he couldn't write something serious. Maybe he had the sudden urge to be taken seriously (when Cary Grant was seized with this misguided urge he made films like Penny Serenade and An Affair to Remember). Perhaps Wodehouse was simply still looking for his groove.

"I believe there are two ways of writing novels" Wodehouse once said. "One is mine, making a sort of musical comedy without music and ignoring real life altogether; the other is going right deep down into life and not caring a damn …" Fortunately for all of us, more often than not P. G. Wodehouse cared a damn.

I love almost everything by Wodehouse I'v ever read, and Frederick Davidson is the perfect narrator for his comic romps, especially those set in the US. Davidson effortlessly switches between a posh Brit accent and a Bowery judder. Really beautiful.