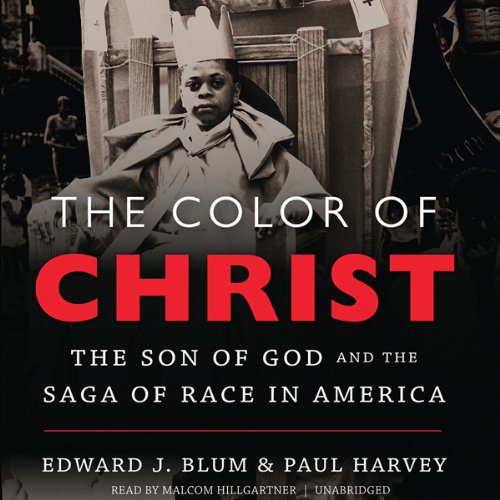 How is it that in America the image of Jesus Christ has been used both to justify the atrocities of white supremacy and to inspire the righteousness of civil rights crusades? In The Color of Christ, Edward J. Blum and Paul Harvey weave a tapestry of American dreams and visions - from witch hunts to web pages, Harlem to Hollywood, slave cabins to South Park, Mormon revelations to Indian reservations - to show how Americans visually remade the Son of God time and again into a sacred symbol of their greatest aspirations, deepest terrors, and mightiest strivings for racial power and justice.

The Color of Christ uncovers how, in a country founded by Puritans who destroyed depictions of Jesus, Americans came to believe in the whiteness of Christ. Some envisioned a white Christ who would sanctify the exploitation of Native Americans and African Americans and bless imperial expansion. Many others pictured a messiah, not necessarily white, who was willing and able to confront white supremacy. The color of Christ still symbolizes America’s most combustible divisions, revealing the power and malleability of race and religion from colonial times to the presidency of Barack Obama.

©2012 the University of North Carolina Press (P)2012 Blackstone Audio, Inc.
“In this powerful and groundbreaking book, historians Blum and Harvey examine how images of Jesus reflect the intersection of race and religion in America. Blending historical analysis, lucid prose, and captivating primary sources, Blum and Harvey trace the remaking of Jesus from Puritan America to antebellum slave cabins, from Joseph Smith’s revelations to Obama’s presidency. The authors compellingly argue that Christ’s body matters, that it signifies power, reflects national fears and evolving conceptions of whiteness, and perpetuates racial hierarchies by continuously reifying the idea that whiteness is sacred…They masterfully probe how a sacred icon can be a tool at once of racial oppression and liberation. A must-read for those interested in American religious history, this book will forever change the way you look at images of Jesus." ( Publisher's Weekly)

History of the portrayal of Jesus in the US

Summary: History of the visual and descriptions of Jesus throughout the history of the United States.
I have been interested in The Color of Christ for a while, but I had not picked it up until Audible.com included it as part of the Audible Plus Catalogue. This new benefit allows members to listen to a couple thousand (mostly older) audiobooks for free.


The Color of Christ is a history of how Jesus has been portrayed and discussed throughout the history of the United States. My main takeaway is that while many have thought of Jesus as white, the actual images of Jesus as white, are relatively recent. Puritans had a strong iconoclast orientation as well as an understanding of the second commandment as including all representations of Jesus. While other Christian communities in the US were more likely to allow for pictures of Jesus, those groups were less culturally influential. It was not until around the 1820s that increased Catholic immigration and other forces started to weaken the cultural prohibitions to representing Christ.


Similar to what was illustrated in Jesus and John Wayne, the way that many argued against the Puritan opposition to representing Jesus Christ was as a means of Christian education. About that time, changes in printing technology allowed for low-cost pamphlets and books to include images. There is an interesting tidbit about the development of Mormon theology. Initially, Joseph Smith spoke about Jesus speaking to him through a bright light. But in later revisions of the story (in the 1820s), it was the tangible physical Jesus, who he described as White with blue eyes. That White Jesus became essential to the development of Mormon theology.


There are so many historical details that were new to me in this book. Part of what was new was Native American pastors that spoke out against white supremacy, slavery, and the lack of Christian ethics. Samson Occom wrote one of the first hymnals in the US and helped found, and fundraise for a school that was originally supposed to be for Native Americans but became Dartmouth. William Apess was a Native American pastor in the early 19th century. He passed away at only 41 but had written several books, including an autobiography and spoke out against the mistreatment of Native Americans and Black slaves and for the importance of being both a Christian and a Pequot.


Another detail I had never heard about was the (fake) Letter of Lentulus. This letter (probably from the 15th century) claimed to be from a Roman official contemporary with Jesus. It was first translated into English in 1680. The portion describing Jesus includes this passage:

"He is a man of medium size (statura procerus, mediocris et spectabilis); he has a venerable aspect, and his beholders can both fear and love him. His hair is of the colour of the ripe hazel-nut, straight down to the ears, but below the ears wavy and curled, with a bluish and bright reflection, flowing over his shoulders. It is parted in two on the top of the head, after the pattern of the Nazarenes. His brow is smooth and very cheerful with a face without wrinkle or spot, embellished by a slightly reddish complexion. His nose and mouth are faultless. His beard is abundant, of the colour of his hair, not long, but divided at the chin."

This description widely impacted how Jesus was portrayed even though it was known to be a fake relatively early. Even early cinema portrayals of Jesus referenced the letter for 'historical accuracy'.


There is a good discussion about Sallman's Head of Christ, the most well known and commercially reproduce an image of Christ. Again, much of the push to reproduce the image was evangelistic and related, part of an opposition to the spread of communism. It is estimated that more than a billion copies of the image have been printed.


The strength of the book is that it talks about not just the art, but the culture around the art. There is a very good discussion about liberation theology and the development of Black and other representational images of Christ as well as the earlier backlashes against an overtly White Jesus. The book ends with recent tv and movies like The Passion, Dogma and South Park.

Not worth the read

Non-white male chiming in here!
11 Chapters in...I finally had to stop. To say that this book is redundant is a major understatement. The crux of the book is as follows::

In all fairness Blum and Harvey take a few jabs at Native Americans for doing the same, but otherwise the major culprits here are white people.

As a non-white, I clearly understand, and have been affected, by the dangers of positing God as a white man. The danger of taking Blum, and Harvey's position however, is that they relegate religion to a social phenomenon, and Jesus Christ to an extension of one races grab for power. If this is all Christianity and Christ is, the real miracle is that Christianity still exists. Consider how many genuinely race-centric religions of the past no longer even exist.

Blum and Harvey make little and next to NO mention of the many people who through religion and faith in Jesus Christ do worlds of good.

I recommend reading the following article before reading this book.

A lot of information to go research and it's a real eye opener, good read.

This book caught my attention from the minute I started listening, right to the very end. It confirms what I have always know about the Christian religion and whiteness and that is that Jesus is usually used in every aspect of religious life and culture to legitimize any Ideology and give it credence in the eyes of the purveyors of such ideology!! I have always been astounded by antebellum African American’s religious faith in the face of danger! While Uncle Tom revel in obedience to Jesus and his slave masters, almost maniacally, there were slaves who did not believe in the fairness, righteousness or saving grace of Jesus since he allowed their suffering to continue!!
For the insular minds among us who only hears the echoing ideologies from their echo chambers in regards to spiritual theologies, race and Jesus this is the book they should read!
For the religiously brain washed among us, this is the book they should read!
The authors laid the brick work for our understand of how we mold Jesus into our ideology in order to get away with our decadence, our piety and our conscience!