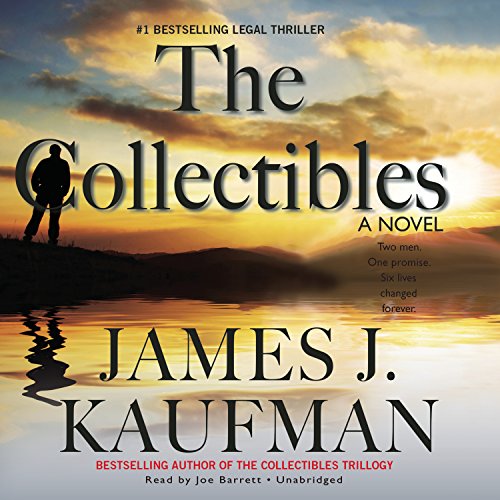 In his award-winning debut novel, James J. Kaufman delivers a gripping and unforgettable story of two strong men from separate worlds - one touched by tragedy, the other by greed - brought together with unexpected results. In chronicling how their lives and those they touch are dramatically changed by their encounter, Kaufman reveals the power of relationships, the nature of love, and ultimately the meaning of life.

Joe Hart has never let go of his uncle's words. An orphan from the unspoiled Adirondack Mountains, Joe leaves his humble beginnings and goes on to distinguish himself, first as a navy submarine commander, then as an attorney unequaled in his field. But Joe's world crashes with an unexpected tragedy.

A child of wealth and privilege from New York's Upper East Side, Preston Wilson harbors a fear of financial failure. When that fear threatens to become reality, Preston tracks down the one attorney who might be able to save him. Joe reluctantly decides to help - but only after extracting a promise that Preston will fulfill an unspecified condition when called upon. Preston, desperate, agrees.

Too soon, Joe calls in his unconventional IOU. The self-absorbed Preston balks when Joe tells him he must meet, earn the trust of, and care for several people. Each of Joe's collectibles - none of whom Preston would ever want to know - has a serious personal challenge. Can Preston find the integrity to make good on his promise to Joe? Does he have a choice?

This book is a MUST READ!


The Collectables is the first in a trilogy written by James Kaufman. It is categorized as a mystery but I'm not sure that's where it belongs. There's not a whole lot of mystery going on in the story, which is not to say there's not a whole lot going on in the story. It almost seems like the lawyering is secondary.
The protagonist (Joe Hart) is an attorney who's own life is full of personal tragedy and loss, the apex being the shooting of his innocent wife. He's gone into the mountains that he grew up in, where as an orphaned child he was raised by his uncle. His lesson in life: "Do what the other fella can't. Be what the other fella ain't. And then help the other fella."
This book is about an attorney who is atypical in that he sometimes gets involved in his clients lives, for life.
There are very few books that I get choked up while listening to but this is one of those. Can't say why, I don't want to spoil this for anyone but this book, although it is a really really great story, the author gets his point across and offers some really great lessons for life with no judgements or boundaries.
Joe Barrett, I just love this narrator. He is also the voice of Joe DeMarco (Mike Lawson). Anyway, as always - superb!

If you found this review helpful, please indicate so.

Too Schmaltzy For My Tastes

I'm about 3/4 of the way through this book and decided to re-read reviews to see if possibly I had missed something. When I bought it, it had been given 4.5 stars so I thought it must be a winner - not so much. It's just too perfect. Joe, the main character, should be put up for sainthood. And all the perfect solutions....give me a break. It's not that I don't like a happy story. This one was simply too contrived. It's like being in a Hallmark card or being painted into a Thomas Kincaid painting.

A number of positive reviews show up at the top but if you keep going you will find about as many negative reviews. Read them carefully and consider whether this is the type of book you will enjoy. Obviously some people did - in fact they loved it.

I'm afraid I am with the group who found the story 'goody-goody,' contrived and unrealistic. I didn't finish the book so I'm not positive the story wasn't redeemed by the end but after checking back over the reviews to try to figure out if I wanted to keep on listening or not I decided it wasn't going to work for me. Maybe I'll finish it someday, but I doubt it.

This novel was a bit bumpy over the first half, but it kept my interest enough to stay with it. I would not describe this as a "legal thriller" (as advertised). It is a unique story that does not fit in easily to any simple genre. The main characters are Preston and Joe, two boys who met briefly at age 14, and reconnected 30 years later when Preston is a businessman in trouble, and Joe is a retired naval captain and brilliant lawyer. Joe lost his parents when he was ten, and was raised by an aunt and uncle who expected him to always do his best and help others. Joe dedicates his life to both, and much of this novel is focused on the people Joe commits to help. Joe is such a good person that some might say no one that good actually exists. The book sacrifices realism for sweetness and heart. I let it do so, and was totally drawn in emotionally in the second half of this novel. If you want a feel-good story that brings out the best in people, you likely will enjoy this novel. I did.

I did not like the story. It was boring. Non-essential details throughout. This is NOT a legal thriller. Just because the guy is a lawyer, this shouldn't be considered a legal book. This is not a thriller in any way shape or form. I kept listening to the end hoping there was *something*. There wasn't. The performance was great though.

A book to nourish the heart

The Collectibles was an inspiring story of a man who lived his life with integrity and love. I found The Collectibles to be beautifully written and engaging from the first page, I connected with the characters and wanted fairy tale endings for each of them, a fairy tale ending is not true to life and so it is with The Collectibiles. Reading a book with such heart is rare, I finished with renewed commitment to my own beliefs and values. I look forward to the next book in the trilogy.

What a disappointment. Got it because of the great reviews and because Joe Barrett was reading it. Thought I was in for a treat--and the first of three in the series!!! Then...the plot. It ricochets all over the place from the start. As the synopsis states, the self-made rich guy does a favor to the born-rich guy and demands that he one day perform an unspecified favor in return. Unforeseen circumstances make him ask for that favor sooner than anyone expected. Except those "unforeseen" circumstances are so contrived, it's hard to go past that. The truth is that the self-made-man could not have known that he would EVER need the help of the other guy--so why did he ever make the demand? (Yes, I know this review is hard to follow but I am trying to avoid spoilers.) The plot was more like an outline, with the author making things happen out of nowhere just to get the story to the next step. And you can tell immediately where it's going to go--a bunch of people showing the poor little rich man how to be a better person. Meh. I could not finish it.

If you want a lift

I nearly didn't finish this book. I am so glad I did. It was just what I needed after being embittered by what's going on in our society. Yes, it's somewhat predictable, but reading this shored up my sagging respect for humanity, reminding me of basic things, like decency, kindness and love. If you need to be reminded of those things, this book is a good tool. Well worth it! Now, to try to hold onto that...

After reading the reviews mentioning Grisham and noting this book is listed as a mystery/thriller, I gave it a try. Certainly not what I was expecting. It wasn't a page turner for me! I've added it to the "abandoned" list.
If you are looking for a touchy freely feel-good story this might be it.

Where does The Collectibles rank among all the audiobooks you’ve listened to so far?

I have listened to around 1000 books. THIS BOOK IS AWESOME. NUMBER 1

The way that Joe made friends with his honesty.This story is written so well that when you start it, you don't want to quit.

Which character – as performed by Joe Barrett – was your favorite?

They were all great characters but the story of the turns that Preston had, made him one of my favorites.

Oh yes, you really get involved in this book.