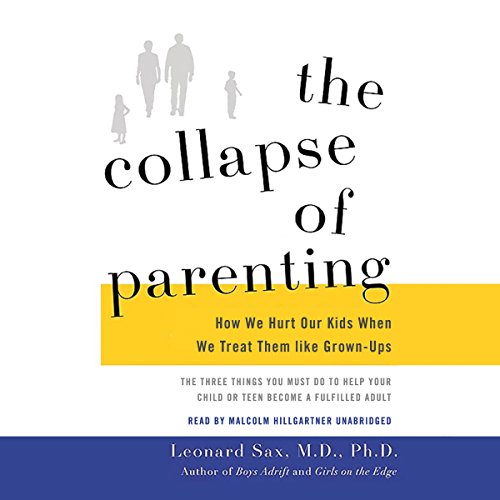 The Collapse of Parenting

In The Collapse of Parenting, Leonard Sax, an acclaimed expert on parenting and childhood development, identifies a key problem plaguing American children, especially relative to other countries: the dramatic decline in young people's achievement and psychological health. The root of this problem, Sax contends, lies in the transfer of authority from parents to their children, a shift that has been occurring over the last 50 years and is now impossible to ignore.

Sax pinpoints the effects of this shift, arguing that the rising levels of obesity, depression, and anxiety among young people - as well as their parents' widespread dependence on psychiatric medications to fix such problems - can all be traced back to a corresponding decline in adult authority.

Sax argues that a general decline in respect for elders has had particularly severe consequences for the relationships between parents and their children. The result is parents are afraid of seeming too dictatorial and end up abdicating their authority entirely rather than taking a stand with their own children. If kids refuse to eat anything green and demand pizza instead, parents give in, inadvertently raising children who expect to eat sweets and junk food and are thus more likely to become obese. If children demand and receive the latest smartphones, tablets, and other gadgets and are then allowed to spend the bulk of their waking hours texting with friends and accessing any website they want, they become increasingly reliant on peers and the media for guidance on how to live rather than their parents. And if they won't sit still in class or listen to adults - parents or teachers - they're often prescribed medication, a quick fix that doesn't help them learn self-control. In short, according to Sax, parents have failed to teach their children good habits, leaving children with no clear sense of the distinction between right and wrong. But, Sax insists, there is hope.

To start with, parents need to regain central places in the lives of their young children, displacing same-age peers who can't provide the same kind of guidance and stability. Parents also need to learn that they can't be best friends and parents at the same time. They'll make their children's lives easier if they focus not on pleasing their kids but instead on giving them the tools they need to lead happy, healthy lives.

Drawing on over 25 years of experience as a family psychologist and hundreds of interviews with children, parents, and teachers in the United States and throughout the world, Sax makes a convincing case that if we are to help our children avoid the pitfalls of an increasingly complicated world, we must reassert authority as parents.

An interesting critique of modern parenting

The doctor has clearly put a lot of thought into his theory. He argues well and the content is delivered concisely and at a good speed. It's definitely written with a US audience in mind which was unfortunately not applicable to my situation, but I really enjoyed the opportunity to hear this man's theory laid bare. He relies on plenty of scientific studies to build his thesis, and in the end develops a grand theory which rests upon, rather than is demanded by the science reviewed. In the end he probably over-reaches a little, but that's to each individual's taste.

I didn't enjoy this quite as much as Scientific Secrets for Raising Kids Who Thrive by Vishton or Brain Rules for Baby by Medina (my absolute fave), but I was looking for something that competes with those and I gave this five stars because it was good enough.

If you like the two I mentioned, give this a try. Failing that, if you're the kind that would like a well laid out foundational theory upon which to base your parenting style, Sax might just be your guy.

This book is about the type of parenting that helps kids be happy adults not just pacified children. It calls for accountability in parenthood. It reminded me to do less multi tasking and more one on one attention with my kids. Reminded me that family should come first in my children's life and I'm the one that needs to set the presidence.

Not many strategies for small kids

This seemed to be geared more for kids 8+. Didn't have many strategies for preschool children besides be strong and don't let your child make the decisions parents should make. Definitely good information but, it was not what I was hoping for.

I felt there were many good points but also felt the author believed things that I felt went to far. Definitely based on Judeo-Christian ethics. Anyone reading it should keep going even when you disagree simply to get the many points requiring our personal thoughts on the issues that are raised.

Excellent, very common sense, plenty of information to be seriously considered. Also read Boy's Adrift from the same author, extremely good read as well! Highly recommed The Collapse of Parenting to any parent who is serious about the job of raising children.

I so needed this!

As a parent who has raised a son who is now 20 and another son who 17 I realize that I have definitely done somethings wrong. Now I am raising seven-year-old twins and I do not want to repeat some of the same mistakes this book has not only given the research data and background as to why certain things fall apart but it is also given me insight as to how to correct them in my life as well as my children's.

Dr. Sax hits the nail on the head with his interpretation of today's parenting in America! Required reading for any parent.

Eye opening. Must read for any parent

This book explains so much. Why each generation is weaker than the last. Why so many think they have ADHD. Long term psychological effects of simple everyday actions.

Highly recommend this book to everyone. Seriously, whether you have children or not, plan, whether you are a teacher, patent, physician, childcare worker. READ THIS FIRST!

Wish I had this earlier in parenthood

I needed this book about 24 years ago. I’m passing along to my kids. It will definitely be a library book I give them. Real life applications to help steer clear of raising a fragile generation.

Essential listening for every parent surrounded by smartphones and apps

This is a fantastic and well timed book for any parent surrounded by modern technology and child-friendly apps.
The most powerful point for me was showing that a more 'old fashioned' traditional upbringing (shared family meals, no social media, no glancing at screens at the dining table (parents included!) or watching TV before homework is completed etc.) is proven to help make respectful and well adjusted children that look up to their parents.
Saying all this, I'm still not ready to give up Disney's YouTube video of 'Let It Go' which I rely on to prevent reliable toddler meltdowns at shoe fitting time, but have started to and will introduce all other points as my toddler grows up.
Highly recommended, even for non-American listeners like myself.

Completely eye-opening and so correct! I have definitely been soft parent and needed re-educating. If you live anywhere other than America don’t be put off by the constant referral to American society and statistics for America. This collapse of parenting is a disease that is spreading beyond America and needs to be addressed here in the UK and elsewhere too.

The information in Leonard Sax's book is very good and gives a good "Wake Up" call to parents. I have read a number of books on this subject and Dr Sax's book is very accessible and highlights and connects some points that I had not previously come across before. An example is the impact of American culture specifically, and how not is affecting the whole world. But it is more acutely affecting American kids because it is their culture. In other countries it is an imported culture.

One issue I have with the text is that he does not give many practical / tacitical examples of things parents could do to help their own families.