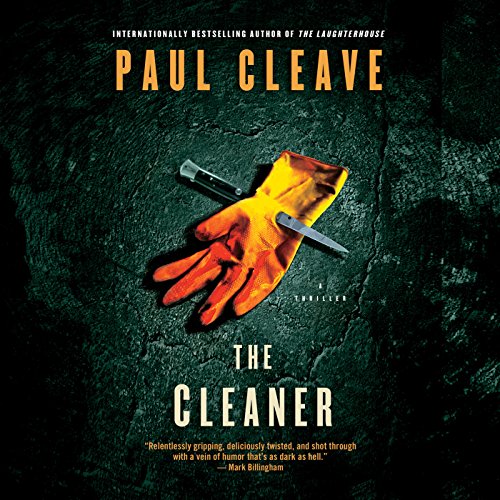 Joe is in control of everything in his simple life - both his day job as a janitor for the police department and his "night work". He isn't bothered by the daily news reports of the Christchurch Carver, who, they say, has murdered seven women. Joe knows, though, that the Carver killed only six. He knows that for a fact, and he's determined to find the copycat. He'll punish him for the one then frame him for the other six. All he needs now is to take care of all the women who keep getting in his way, including his overprotective mother.

Then there's the mysterious Melissa, the only woman to have ever understood him, but whose fantasies of blackmail and torture don't have a place in Joe's investigation.

"This book is not for the faint of heart or weak of stomach." ( Booklist)

Brilliant for sure!! Greatly structured. Full of suspense and funny! Is always strange to empathize with the bad guys, but even more so when you want him so much to succeed.

There were a lot of unexpected turns in this book. I don’t know how the author made a serial killer funny and somewhat likable. I give a lot of the credit to Paul Ansdell’s narration. There were conversations that literally had me laughing out loud. Make no mistake, this is a murder mystery and a view into the mind of a sociopath. There are gruesome crimes committed with enough detail to make you cringe, but not overdone. I highly recommend the book, but I recommend listening to it. The narration is too good to miss.

Who is hunting who?

Note: This book can be read as part of the bigger series of crime novels that all take place in Christchurch, New Zealand. Some characters from those other novels are mentioned here but you don’t have to have read them to understand the context. It works just fine as a stand alone.

As we all know from the book’s description, Joe is the Christchurch Carver, and 7 killings have been attributed to him. But he only killed 6, so he is determined to hunt down this copy cat killer and punish him for overstepping. Right away, I had a little evil chuckle over the idea that serial killers have a code of polite behavior among themselves. Later on, the reader meets Melissa, another killer, and she’s pretty miffed at Joe for breaking her ideas of polite behavior as well. Obviously, things would go much easier for Joe if he had a rolodex of the local killers in Christchurch and could coordinate such things. Alas, to be a serial killer is to be a loner.

Joe likes to play the mentally retarded janitor and that’s how he got the job at the Christchurch police headquarters. This allows Joe all sorts of access to the investigation into his killings. For much of the book, no one is aware of what Joe is. Detective Schroeder, who we’ve seen in other Christchurch crime novels by this author, is unaware of Joe’s real abilities. Even his mother, who is verbally and sometimes physically abusive, finds him subservient. It was a delicious kind of agony to know that Joe is this vicious killer!

The author did a great job of balancing the story – I wanted Joe caught, but not so soon or not so easily because I wanted an interesting tale. The violence is, for the most part, referred to instead of portrayed in grim detail. Though there is one scene where Joe suffers a significant injury that was graphic but since he’s the evil serial killer, I was fine with that.

Joe’s mom was excellently done. She’s into memorizing the grocery store ads and puzzles and she’s not a very good cook but thinks she is. In some eerie ways, she reminded me of my own mom. Not that I’m going to turn into a serial killer because of it or anything.😉

Then there’s Sally, a maintenance worker at the police precinct. She had a brother who passed away and Sally becomes a bit fixated on Joe, wanting to help him. She plays a key role later on in the book that I won’t spoil, but her character went from being pretty mellow boring to rather interesting. She’s got her own hang ups and parental issues.

One of the things I really enjoyed about this book is that I kept questioning whether or not Joe was mildly retarded (and he just didn’t accept that) or if he was really delusional about some things. He’s obviously a planner and can blend in when he decides to do so. I liked that I kept questioning his IQ throughout the book. Over all, it was pretty thrilling to watch a serial killer go on the hunt for another killer, working outside legal limits.

Narration: Paul Ansdell was, once again, a good fit for the main character. He had a variety of British accents, making it easy to keep the characters straight. His female voices were believable and I especially liked his eerie crazy voice for Melissa. He did a great job switching between regular Joe and retarded Joe.

If you could sum up The Cleaner in three words, what would they be?

What does Paul Ansdell bring to the story that you wouldn’t experience if you just read the book?

My first review despite a huge audiobook library - mainly because the current rating is not accurate and may dissuade others from a really good listen. After reading The Cleaner, I purchased several other audiobooks and paperbacks from this author. He rarely disappoints! Despite the subject matter, don't be surprised to at least smile at the irreverant humor embedded in the twisted and gripping narrative.

This book is brilliant and I would definitely recommend listening to it, instead of reading it. The narrator brought this character to life!! I loved every twisted minute of it!

Would you listen to The Cleaner again? Why?

First book I read/listen by this writer, Love they way he writes, they way he portrays his characters!

Joe! OMG in this book I actually want the bad guy to walk away!!! and it is the way the writer has created Joe! I actually liked JOE.

What does Paul Ansdell bring to the story that you wouldn’t experience if you just read the book?

I usually cannot listen to books read by people with Englis accents, but Paul's accent is smooth and actually very nice, I enjoyed the emphasis he gave when needed.

Why no NZ accents?

Fascinating book. Luckily I have very little visual imagination so the gory bits did not put me off the novel! However, the most irritating aspect of the audible edition is the accent of the narrator - or lack of accent. The main protagonist, and all the other voices too, spoke in English (UK) accents. The book is set in Christchurch, New Zealand!

I purchased this back when it was released, and somehow got it ,muddled with the Mark Dawson book of the same name, so have only just listened to it, and I can honestly say that it's the most engrossing story I've heard so far this year (2019) over three years after I purchased it.

The story is told from the killers perspective and I've never listened to this type of thriller before but I'm glad I found this one, Joe is quite hysterical, as in funny, all the way through, so I would class this as a black comedy thriller, I am not sure if it's inteneded to be humerous but I found it so. It's a little gory, it's a little gruesome, it's downright unpleasant at times but it's also jolly good fun, I highly recommend this book to all (except people who don't like gore etc.)

Oh, and Paul Ansdell narrated it brilliantly, I don't know why a New Zealander was not chosen to narrate but I am British so I totally enjoyed the narration.

With black humour, an unpredictable plot and a very satisfying ending, this serial killer novel ticked all but one of my boxes. Although it’s probably not to everyone’s taste with its graphic description of violence and injury, I loved this and will definitely seek out Paul Cleave’s other novels. My one disappointment was that although set in New Zealand, it was inexplicably narrated in an English accent.