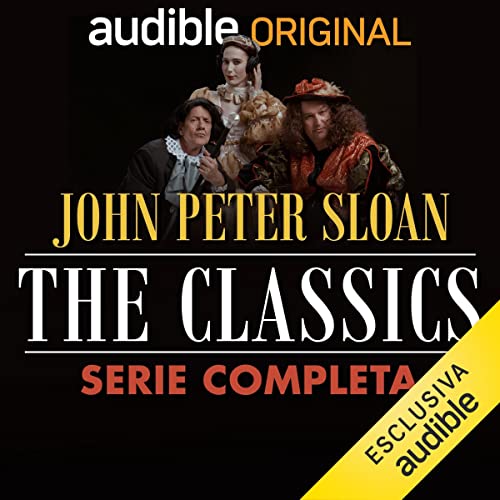 I listened to this series just one day after John had left us, had "quit the scene" so unexpectedly and tragically, and made us cry as if a friend of ours had gone forever, and left a big, terrible gap behind.
Therefore it was even more a "strange and special" experience, listening (and learning) about English literature classics, read and commented by the "Fabulous Three" John, Daniela and Rob. Especially John's epilogue, his last gags in the last episode, assumed a very sad and strange meaning and made us cry and laugh together!
I don't feel like criticizing the choice of authors or the choice of titles the three of you have made: some, like Shakespeare, Melville, Dickens, Wilde and Twain were absolute MUSTS, whilst others weren't (according to my modest opinion and knowledge of classics), but this is more a question of literary personal taste, rather than anything else. Personally, though being a woman, I don't fancy at all authors like Charlotte Brontë, nor Jane Austin, nor any other author of "pink novels": I find them awfully boring and "outdated", but perhaps I'm wrong...there may be some timelessnes in them, too. Neither can I understand peoples' (women's, as John said!😱) passion for horror stories and films! I find them simply disgusting and revolting and, even though they seem to belong to the "classics of literature", I wouldn't agree with that, with the only exception of...(how dare you leave him out?!!!) EDGAR ALAN POE and his masterpieces about "the dark side of the soul". He would have been, according to me, an absolute MUST, but you are still in time:
I would suggest to Rob & Dany: don't give up, don't leave us alone in this " brave new world, even though it will be hard without John! John wouldn't want it...
Therefore, in the next series, I would very much appreciate some "classics" of crime, like Edgar Wallace, Conan Doyle, Agatha Christie and of course ...the outstanding MUST, E.A. Poe.
Last but not least, I would suggest some classics of adventure, like Joseph Conrad's "Lord Jim" Robert L. Stevenson's "Treasure Island", etc., as well as some science fiction classics like Ray Bradbury's "The Martian Chronicles", George Orwell's (another MUST) "1984", and the fabulous "Animal Farm", as well as Aldous Huxley's very suggestive "Brave New World"....the list could go on but the space wouln't be enough. How about some modern theatre "classics" like Arthur Miller's "View from the bridge" or Virginia Wolfe's "Who's afraid of V.W.?"
By the way, the original Faust didn't say "two hearts are beating in my breast" but "two souls are living, alas, in my breast"...("Zwei Seelen leben, ach, in meiner Brust!") I think the translator should have sticked closer to the original.

Is this enough for now? I guess so...
Once again: DON'T GIVE UP, PLEASE!
John would't agree.

My hat's off to you lot

This was amazing. Brilliant idea really, I can't wait to hearing of a second series, even a third one. I can't get enough of it. Robert well done. Thanks to John and Daniela for expressing my own feelings during the episodes

I enjoyed the series very much. I really look forward to another series about business English for example. The fact that it was completely in English was an excellent idea! Well done guy!

Entertaining and educational at the same time. Please make some more courses on literature! 👍