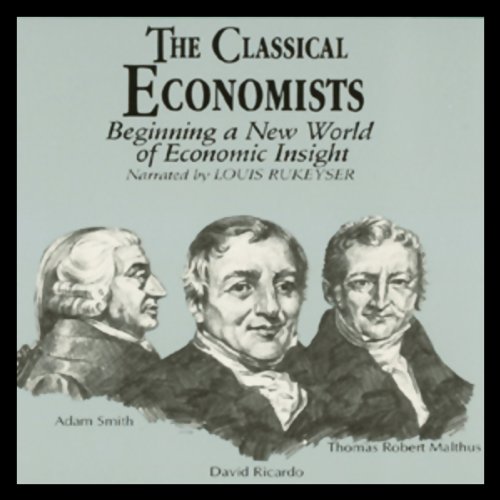 The classical economists pioneered a new way of thinking about the uniquely human tendency to produce, trade, consume, and accumulate.

The author does a good job contextualizing the mercantilist environment in which Adam Smith made his landmark contribution to political economy. Thereafter the teachings of classical economics are traced from Adam Smith's upbeat world view to the more "dismal" overtones of David Ricardo and John S. Mill. I can't quite figure out whether the various personality accents are a plus or minus to an otherwise well-narrated piece.

Narration was solid. Characterization was great.
I would have appreciated more succinct summaries after first hand quotes/statistical citations.

If you could sum up The Classical Economists in three words, what would they be?

It gives a great introduction to the foundation of our modern economy. It is essential knowledge for anyone with even a passing interest in social, political and economic issues. It is very apt in the current economic climate and the raging debate over what is fairer capitalism

What other book might you compare The Classical Economists to and why?

What does Louis Rukeyser bring to the story that you wouldn’t experience if you just read the book?

It brings the material to life in a way not possible by just reading it.