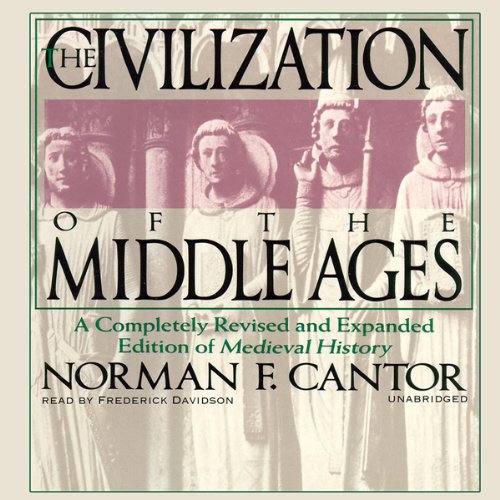 In 1963, Norman F. Cantor published his breakthrough narrative history of the Middle Ages. Here is a significant revision, update, and expansion of that work.

The Civilization of the Middle Ages incorporates current research, recent trends in interpretation, and novel perspectives, especially on the foundations of the Middle Ages and the Later Middle Ages of the fourteenth and fifteenth centuries. A sharper focus on social history, Jewish history, women’s roles in society, and popular religion and heresy distinguish the book. While the first and last sections of the book are almost entirely new and many additions have been incorporated in the intervening sections, Cantor has retained the powerful narrative flow that made earlier editions so accessible.

This has long been a highly regarded book summarizing the history of the Middle Ages. I've had a print copy for a long time but never had the time to read most of it, so I was very happy to see this audio version.
This is NOT entertainment. If you're looking for thrilling stories, titillating facts, and hero-worship, this is not the book for you. But if you want to learn the basic nitty-gritty details of medieval history -- who did what when, and why it mattered -- this book is perfect. The narrator does a convincing job with the French and German words, and gives it enough life to hold your attention without trying to overly dramatize a book that isn't really dramatic. I've found it worthwhile to listen to each section over and over to absorb all the information.

The main criticisms I have are that it's a bit narrow and conservative. By conservative, I mean that the author largely dismisses or ignores popular and non-mainstream cultures, despite the large amount that is known about them from historians' research. Also, his focus on England, France, Germany, and Italy means that we learn almost nothing about Eastern Europe and very little about Spain. But this is normal for books on "European History" or "Western Civilization," so one can't complain too much.

Frederick Davidson brings strength ,nuance,and subtlety to this amazing rendition of the MiddleAges
As magnificently researched and rendered by the pen of Mr. Norman Cantor.

I will definitely listen to this masterpiece again.

Considering the large time period covered in this book, it feels fairly complete. Despite lack of action and dryness of subject, Cantor manages to make this thing a page turner. Very educational. Cantor has a master grasp on the subject. As always, Fredrick Davidson is PERFECT for the subject matter. He certainly adds to the experience.

Great book and a great narrarator

The best introduction to the subject. David Case/Frederick Davidson's narration is wonderful. Listen and re-listen to this masterpiece in conjunction with Inventing the Middle Ages and you will learn a lot.

Granted, Frederick Davidson's narration takes some getting used to. But believe me, you'll appreciate his flow soon enough. And once you do, you'll find that he has the perfect style for this amazing masterpiece of a retelling of Europe's tumultuous history. Absolutely recommended for anyone with even a slight interest in the Middle Ages.

I don’t pretend to have any knowledge of the subject-matter of this book, but that’s why I bought it. It’s very long, but my interest never flagged. Norman Cantor takes a very high overview of the Middle Ages, which he defines as extending from the conversion of Constantine to the end of the 15th century — an extremely long period to cover. I found it immensely informative, beautifully written, and equally beautifully read by Frederick Davidson, who seems to be able to read virtually anything well.

The medieval history course I wish I had taken

The things I'd learned in bits and pieces over morel than a decade beautifully and intelligently tied together into a course I wish I had been available in my university days. Excellent narration that keeps things moving in a subtly energetic delivery.

A pompous and lifeless discussion of its topic

It was not a helpful or memorable way to learn about a period of history. While the facts presented may be correct, the overuse of esoteric words that seem intended to impress scholars and PhD candidates do not bring the actions or people mentioned to life. Most sentences contain reference to several “isms” instead really explaining what the sentence was to convey. Only a graduate student trying to impress a professor would tell a history like this.

An interesting and broad book that leaves very little out. In fact the book enters into all the minute details that it possibily could, which is why it is so very long. It is nevertheless very interesting.

It is somewhat spoiled by the reader, who seems to want to appear learned but instead has infuriating inflexions in his speech.

Do you think The Civilization of the Middle Ages needs a follow-up book? Why or why not?

Cannot think what more could be added, but it might be an idea to get someone else to perform the reading of this book.

Only audible book that made me want to self harm

There is a good chance that this is an excellent book unfortunately the narration is so painful I will never know.

Would you recommend The Civilization of the Middle Ages to your friends? Why or why not?

No - because that would be cruel.

The performance would have been better by getting anyone who didn't sound like Kenneth Williams to read it.

I'm going to get my money back right now!

What did you like most about The Civilization of the Middle Ages?

The portrayal of society and thought in the period

The narration is very plummy but after a little while his clarity and diction adds to the majesty of the book.
Thoroughly recommended to anyone interested in exploring the culture of the period and how it evolved