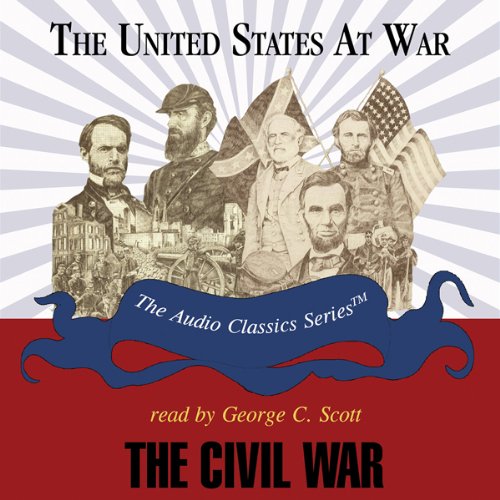 This volume is a two-part history of the Civil War.

From 1861 to 1865 America was caught in the convulsions of war—the Civil War. No historical event, short of the American Revolution itself, has so deeply affected the United States.

The Civil War is often called the War between the States by Southern historians, aptly illustrating the political question underpinning the war: Was the United States one nation, or were the United States a group of sovereign entities that could choose to disassociate?

Both sides honored the same constitution, spoke the same language, and worshipped the same God. But the two could not agree on whether America was a union or a compact of states.

With the advent of war, the Confederate States of America faced serious problems. The Confederate population was 9.1 million compared to the Union’s 19.1 million. The South controlled only one quarter of America’s wealth. Its railroad mileage was only half that of the Union, and its navy was badly outnumbered. But the South was fighting a defensive war on its own soil, and military theorists agree that such a war requires a three-to-one superiority for an aggressor to win. Many believed the South could prevail.

Nevertheless, on April 9, 1865, General Lee surrendered what remained of his army. But what had the North won?

The United States of America was now one nation under God. But that nation was crippled by the economic costs of the war—wholesale destruction, inflation, poverty. The political costs were no less. Abraham Lincoln had been assassinated; Southern leaders were in jail; the federal government had swollen in size and power. Northern politicians then began to “reconstruct” the South, building state governments that would be loyal to the union. But the conquered South simmered with resentments that could not be legislated out of existence.

Jeffrey Rogers Hummel is the author of Emancipating Slaves, Enslaving Free Men: A History of the American Civil War. He teaches economics and history at San José State University. Before joining the SJSU economics faculty, he lectured as an adjunct at Golden Gate University and Santa Clara University. Hummel served as a tank platoon leader in the US Army during the early seventies; was publications director for the Independent Institute in Oakland, California, in the late eighties; and was a National Fellow at Stanford University’s Hoover Institution for the 2001/02 academic year.

Intellectual analysis of the Civil War

This book is fundamentally about the ideas of the Civil War, so if you need something with a description of how many troops fought in such and such battle, you’ll need to look elsewhere. Part I deals with slavery and the run up to the war: how slave owners tried to justify themselves, and how those arguments were countered by the abolitionist movement and how they changed a large part of American minds on the issue. The audio uses a lot of first-person diaries, transcripts, and letters to tell the story of the political war and then the physical conflict which resulted between the two sides. Part II deals with the events during the war, and how those events were perceived by both sides. It even gets a little bit into the aftermath of the Civil War and the ongoing struggle to give people of color full rights. But I can’t praise this enough for giving a good insight into what Americans during this time thought. George C. Scott does the bulk of the narration, and a cast of voice actors reads individual people.