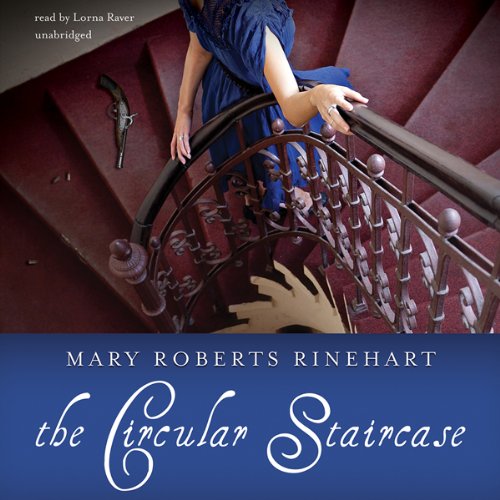 ”This is the story of how a middle-aged spinster lost her mind, deserted her domestic gods in the city, took a furnished house for the summer out of town, and found herself involved in one of those mysterious crimes that keep our newspapers and detective agencies happy and prosperous.” So begins The Circular Staircase, a book which has been hailed as the best novel by the most important American woman mystery writer of our time.

Rachel Innes was relieved when Gertrude and Halsey arrived to keep their dear old aunt company and allow her the courtesy of a decent night’s sleep. Unfortunately, the explosive sound of a revolver shot the next night shattered Rachel’s hopes. And the body at the foot of the circular staircase ensured many sleepless nights to follow.

Would you try another book from Mary Roberts Rinehart and/or Lorna Raver?

Maybe it just was not what I was expecting, but I found the story tedious and decided not to finish listening. However, I thoroughly enjoyed Lorna Raver's narration and will look for her reading other books.

Has The Circular Staircase turned you off from other books in this genre?

I loved her voices and characterizations.

Mary Roberts Rinehart is one of my favorite American writers of the light or 'cozy' mystery story, as well as a master of the sardonic style of journal-telling format.

I have read this book a few times; it is somewhat convoluted and maybe not MRR's best.

The Roberts Rinehart heroines deserve MUCH better! A narrator who is as familiar with MRR's style as many of her admirers and readers. Also, one who does not think a middle-aged woman has the vocality of a septua- or even octogenarian.

Was The Circular Staircase worth the listening time?

It should have been; however, I hope it will not be the first try by many readers of MRR's books.

I had been almost angry in the past at Flo Gibson's aging of MRR's middleaged characters- these are strong women, full of wit and sarcasm, daring, and even romance. Yet Flo gave the 80 year-old's quaver to every one of them. In the case of Tish, perhaps, this was acceptable--but not for ALL. Some of these women end up in a romance by story's end with the detective, investigator, etc., of the story--and, incidentally, these same-aged male characters are given a sound normal to a middle aged man. Therefore, I was pleased to see a new name for narration when I found MRR's offerings on Audible.com. Alas, this narrator apparently learned at the knee of Flo!

Mary Roberts Rinehart is one of the classic mystery witers, along with Agatha Christie, Dorothy Sayers and Margery Allingham. this book is one of the ones that made her reputaton. It has all the classic elements: an isolated coutry house, noises in the night, an nkonwn person dead in a locked huse....

Written in 1908 by one of the earliest women mystery writers about a woman who finds herself playing detective, it's a captivating story and the narrator captures what I imagine the voice of the heroine would have been. The story is well told, and the characters are interesting and well developed.

My caveat: Being from this era, unfortunately the author also embedded two or three racist references in her description of the African American servant and in repeating someone's thought "The only Indian is a dead Indian."

Mary Roberts Rinehart is known as "the American Agatha Christie," though she published her first mystery 14 years before Christie's The Mysterious Affair at Seedless of1920. Probably Rinehart's most famous book is 1908's The Circular Staircase in which narrator Rachel Innes, the spinster guardian of her niece and nephew, Gertrude and Halsey, takes a lease on the house owned by the banker Paul Armstrong, to find herself involved in a curious mystery. The book, narrated by Rachel, is credited with inventing the "Had I But Known" style of mystery books in which the mystery takes much longer to solve because various characters keep facts to themselves and thus prolong the solution from coming to light.

The Circular Staircase begins when Rachel Innes leases a summer home in the country, Sunnyside, for herself, Halsey, and Gertrude, now 20 and 24 respectively. The first night, she and her lifelong maid, who is really her best friend, Liddy, are left alone in the house after all the servants desert them, and they hear noises of what Rachel considers to be an intruder and Liddy considers to be a ghost. With morning light, things seem better, and Halsey and Gertrude arrive, along with a man named Jack Bailey, whom Halsey assures her she will soon come to love. With night's rearrival, Rachel is awakened by noises downstairs near the circular staircase and then hears a gunshot. Racing downstairs with Liddy, Rachel stumbles across the body of a stranger, shot to death but with no one else seemingly around. Gertrude soon comes to the scene, but neither Halsey nor Jack is home, having left just minutes before, according to Gertrude. The murdered man turns out to be that of Arnold Armstrong, the reprobate son of the house's owner, but no one knows what he was doing in the house. It soon becomes apparent that Jack Bailey is the chief suspect, at which point Rachel learns that Gertrude has been engaged to the man. Further, Halsey announces that he plans to marry Louise Armstrong.

The book continues with Rachel's trying to solve the case, made more dramatic when the newspaper reports that Armstrong's bank has gone bust in an age before the U.S. government insured people's money. Thus the niece and nephew have just lost all their money by someone's embezzling the money from the bank, where Jack serves as the clerk and Louise is the daughter of the owner. Jack gets immediately arrested for the crime, which affects both siblings more than learning that they have just become paupers in a society that cares greatly about status and money. But Rachel plugs away at the case, with many advances and set-backs as they face the uninvited visitor in the night and try to find a solution to the myriad mysterious goings-on.

The Circular Staircase particularly impressed me with its very well defined characters. Each of the main individuals has a distinct nature, in particular Rachel, whose dry wit during her narration adds humor to the book without making it come across as inappropriately funny. Her depictions of all the events well fit the gothic style of novel, with the creaking noises, secret hidden passages, and appearance of ghosts, even though Rachel refuses to admit that there are such things as ghosts. Depictions of creepy things get drawn out, just as is typical in the gothic novel. I found myself reminded of Daphne du Maurier's Rebecca in both its gothic, creepy details and also the way it keeps adding new details to develop an extended mystery plot. The book also reveals its Victorian influence, despite its being an American novel. It has a very British feel to it, with references to American cities coming almost jarringly. However, one must also keep in mind that the book was written over 100 years ago, so there are statements about African Americans that would be offensive if written today, such as describing the tone of a man's skin. But the descriptions are not made to be intentionally derogatory, just using terms that were in common usage in 1900.

As much as The Circular Staircase is both famous and influential to mystery writing, I personally found the book to drag out for a while. That is a characteristic of Victorian literature, seen in such books as The Moonstone or The Woman in White by Wilkie Collins. Those who have read Charles Dickens will recognize this style of writing. As someone who spends her time listening to more contemporary books, even when, such as Agatha Christie, they are not much more recent than Rinehart, I found this writing style to be tiresome. I would have preferred something more straightforward. I think it was the "Had I But Known" feature that actually made things a little tedious to me, as it got annoying that Rachel kept complaining that things would not have gone bad had both Gertrude and Halsey been honest about everything the whole time.

Lorna Raver performs the audiobook of The Circular Staircase. She does a good job of portraying the sense of the book, especially the eerieness of its gothic character. Further, she has created effective voices for each person. As Rachel, Raver adds a clear touch of drama to the book.

The Circular Staircase was worth reading just to gain exposure to this early piece of mystery literature. Even though it's not my personal preference, I can recognize its strengths, and those who are fans of gothic literature and Rebecca in particular will especially appreciate it. I give the book three stars on my own but five on the basis of its influence and literary qualities.

The storyline is good, but the author is incredibly racist. Sign of the times it was written. As an African American I found her comments about blacks to be intolerable. Also, I hated the protagonist - what a witch!

I Hated This Book

This is an alright mystery story, but I could just not get past the portrayal of the black guy, and the language used to describe him. When reading old books I do try to understand that things used to be different, and I guess it didn't raise any eyebrows for the author to call one of her characters "that darky" or whatever, but it was too jarring for me, and I think it's because the narrator made those passages worse. There is also the simpering woman, who did nothing but cry and say "you will hate me". I thought this was a classic, but it annoyed me greatly. Oh well, the story itself is a bit interesting.