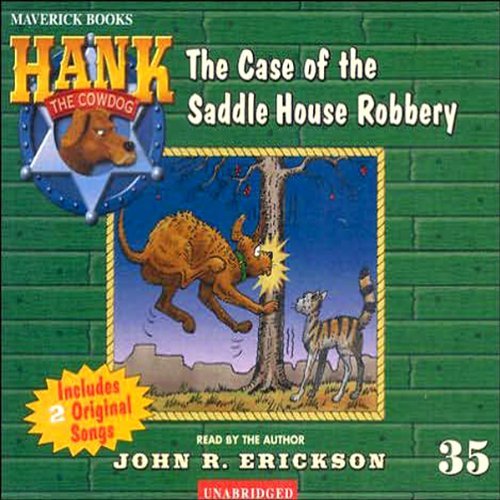 The Case of the Saddle House Robbery

There's a new dog on the ranch, and Hank the Cowdog is none too thrilled about it. He's supposed to keep an eye on Jake until his owner shows up, but Jake's got other plans. He has to get to Madagascar before someone makes off with his treasure!

As if Hank doesn't have enough to worry about, there's a saddle thief on the loose. Is Jake in cahoots with the robber? Are there really monkeys under the toolshed?

One of our favorites as a family! There is a saddle thief out there hitting ranches and Hank is warned by Slim to be on the look-out. If only Hank wasn't so gullible!! At the same time, a stray dog becomes a guest on the ranch. However, this stray dog isn't playing with a full deck and thinks he's been marooned on the island of Madagascar and soon so does Drover. Hilarity ensues. Over 15 years, with our various kids we have listened to this one and everyone is always on the edge of their seats toward the end. And they always ask to listen to the song over and over, it is very cleverly written. We wore out the CD and finally had to buy the audible version.

Hank books are a good read but they are a treat to listen to. Over the years, for family vacations, on the to do list, there is always the instruction to "Get a new Hank cd for the road". Even my husband will ask me to pick one out and get it downloaded on his phone so he can listen on his business car trips. That is saying a lot about the quality writing of the Hank stories.